We flew out of Santiago to Lima, intending to travel through Peru. But after four days, we hightailed it to Bogota because we realized it was raining hard, and was going to continue to rain until May, in the Peruvian high country where we are hoping to do some longer hikes. After two days in Bogota and sitting through a two-hour Uber ride to the center of the city, we’d had our fill of the big city life and needed to recharge in more pastoral settings. So we headed to the small town of Salento in the Zona Cafetera, aka coffee zone. 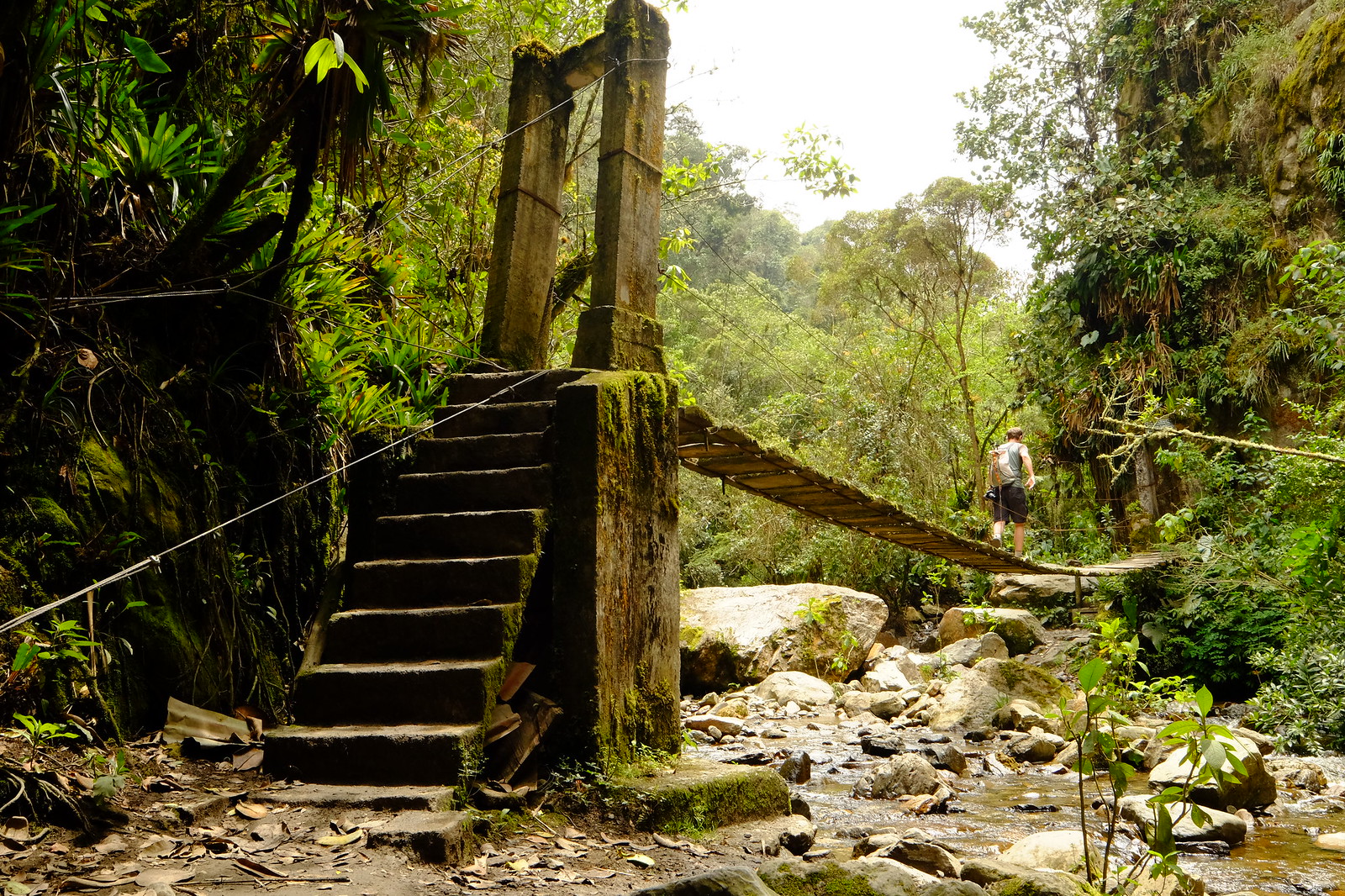 On the first day we managed to hitch a ride standing on the back bumper of a WWII-era Willy’s Jeep to the Corcora Valley. After that white knuckled ride, we started our hike up to a beautiful little hummingbird sanctuary. The valley itself is known for its magnificent Wax Palms, though not technically a tree it is Colombia’s national tree, some of which climb to over two hundred feet tall. At the top of what turned out to be a very strenuous hike, we were greeted at the high altitude summit somewhere near 2500 meters by many different varieties of hummingbirds. At the little summit hut stop we were served a delicious cup of hot chocolate Colombian style, that is to say there was a square of queso fresco floating in the milk-less hot chocolate. My more northern eye looked askance at this chunk of cheese in my hot cocoa, but trust me when I say it hit the spot. We remained here for a good hour or so before heading down. It was here that it started to rain. When it rained it poured, and we were drenched through and through. 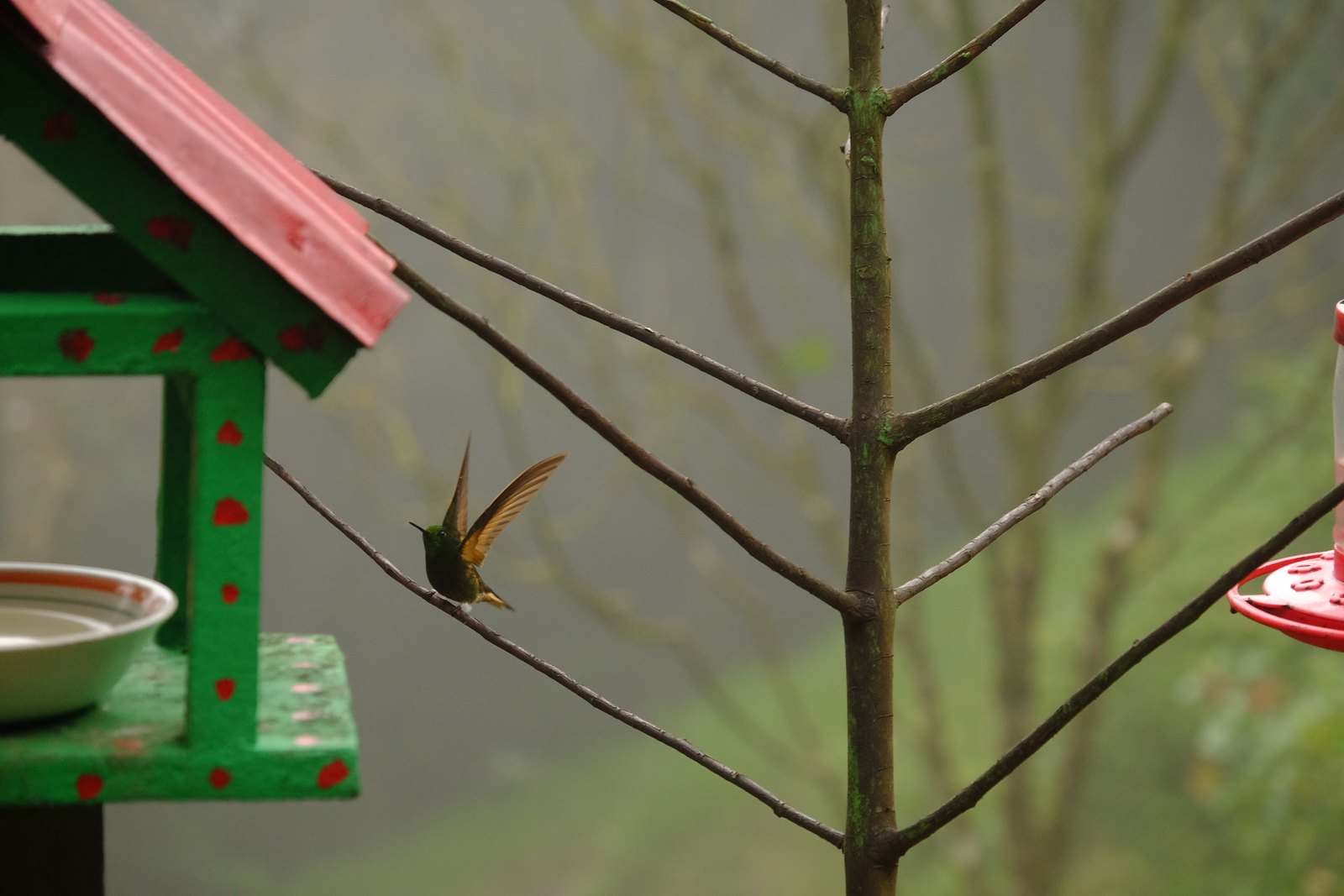 It turns out that Colombia grows quite a bit of very good coffee. There are two main types of coffee grown commercially: arabica, which is the premier bean in that it has less caffeine but more flavor; and robusta, which is higher in caffeine but not as much flavor and not as smooth. Colombia only grows arabica, and although they export most of their best coffee and save the dregs for national consumption, it is indeed possible to get a really fantastic cup of joe here. Searching for the source of my great addiction, we visited a coffee plantation just on the edge of town run by an Australian named Timothy Edward who goes by the local name of Don Eduardo, for what I think is a bit of marketing effort. But whatever the reason, Tim ran a very informative, two hour coffee tour, from the land and elevation for growing it, the different types of coffee plants and why he primarily grows traditional arabica as opposed to modern hybrid arabica plants, right down to roasting it and tasting it. We learned that the darker the roast, the less caffeine per bean, and the less beans needed to make a strong tasting cup of coffee. So Starbucks, one of the darkest roasters, wins on both ends because less beans per cup and you need to buy more to get your fix. But I digress. 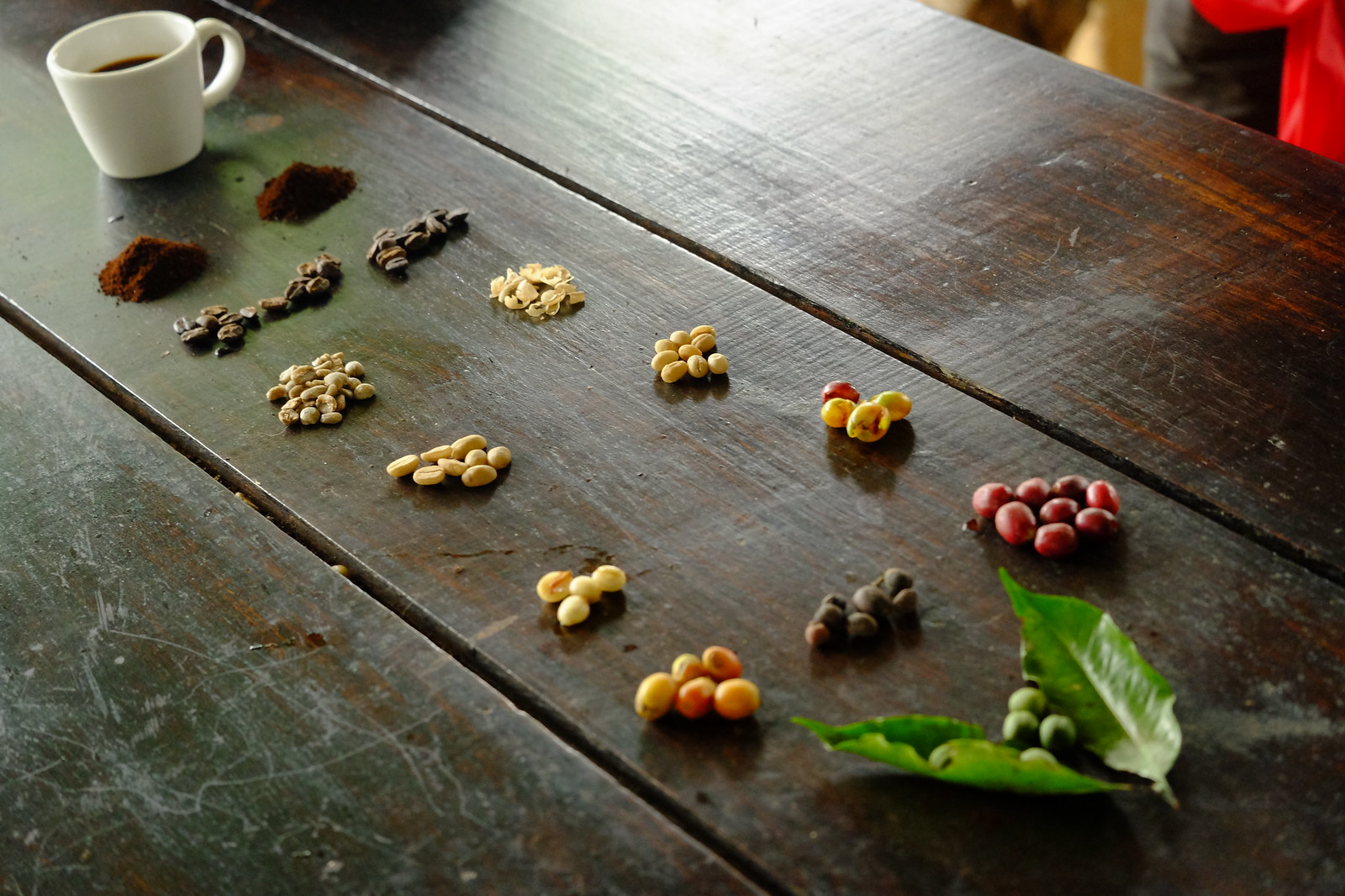 Salento sits in the tropical Andean cloud forest. Which means it rains a lot and most days the surrounding hills are shrouded in clouds that swirl about, making for quite a landscape. Despite the daily rain, we liked Salento a lot. The people, as with everywhere we’d been in Colombia, were extremely nice and outgoing. The scenery was incredible. Almost everywhere you looked there was another spectacle to witness. There was an abundant use of pack and riding horses and mules. Interesting really that it wasn’t for lack of mechanized options, but rather the terrain was generally better suited to legs as a means of effective locomotion. Overall the climate was cool but damp humid, perfect for coffee. 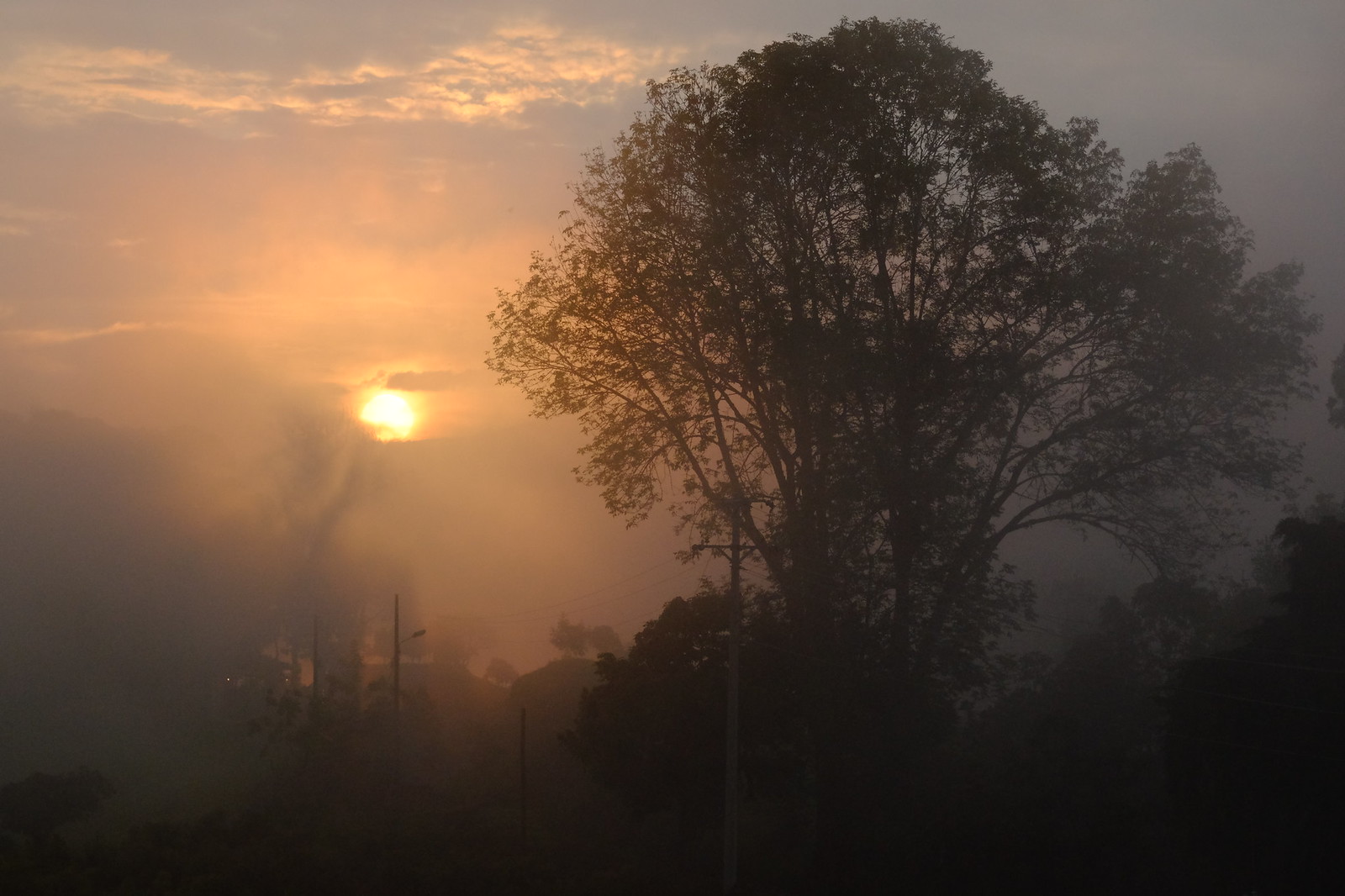 Alas, everything comes to an end and after five or so days we were looking forward to possibly drying out somewhere. Medellin, albeit a larger city, might offer us that opportunity so off we went for a six-hour bus ride through the mountains to the former home of Pablo Escobar. 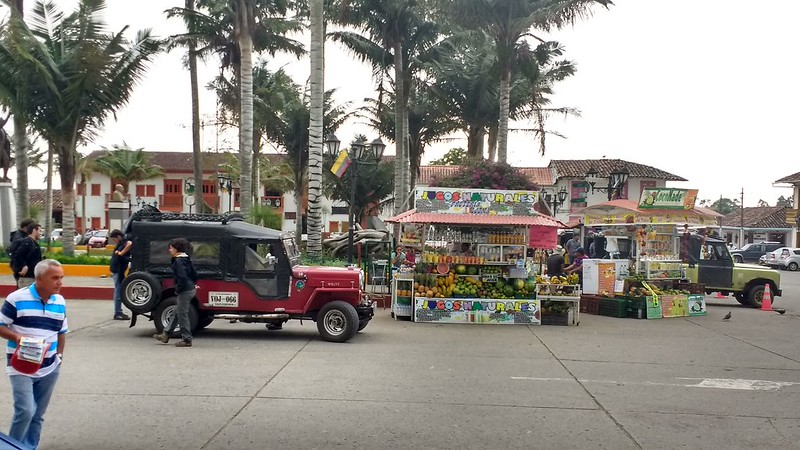 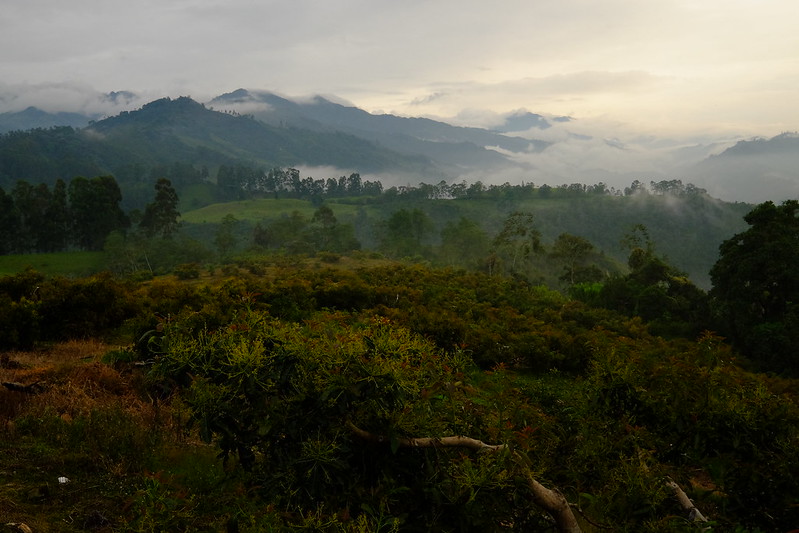 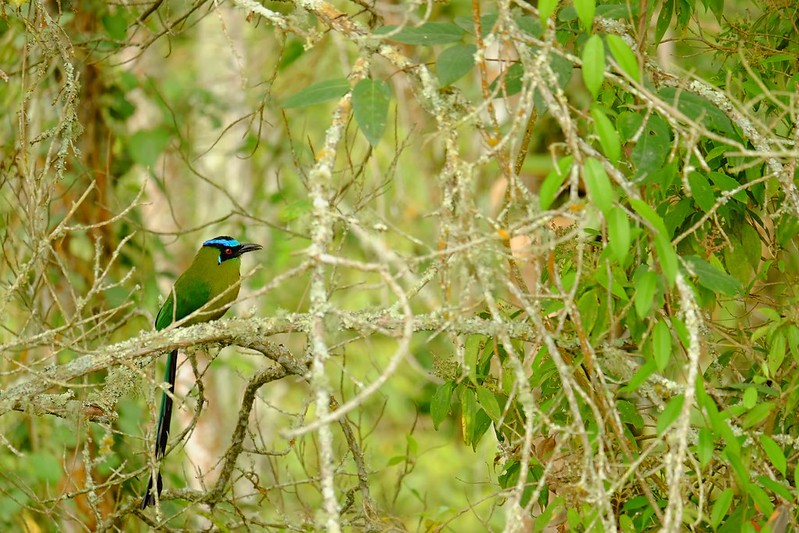 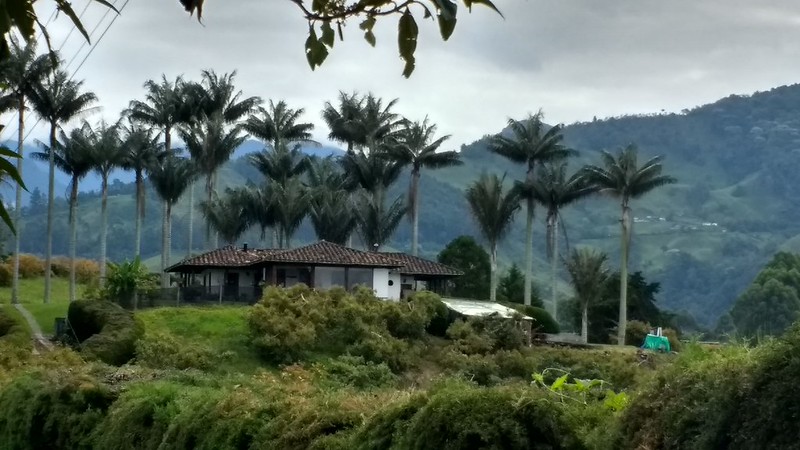 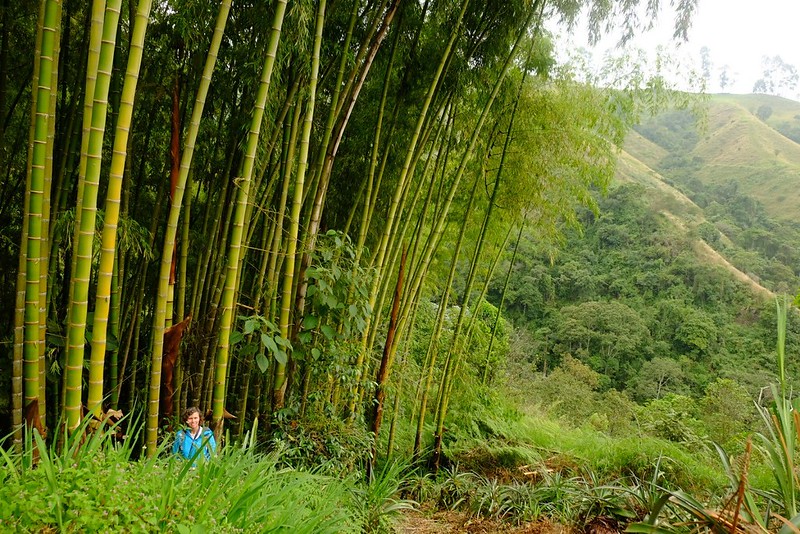 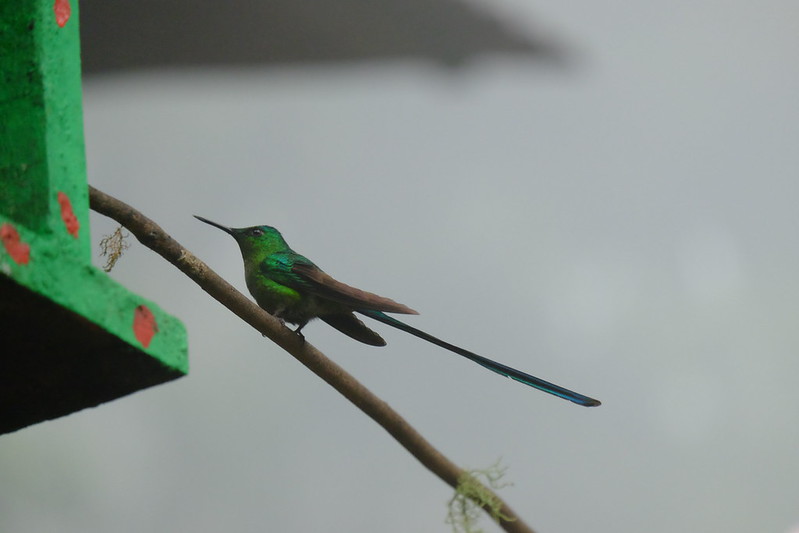 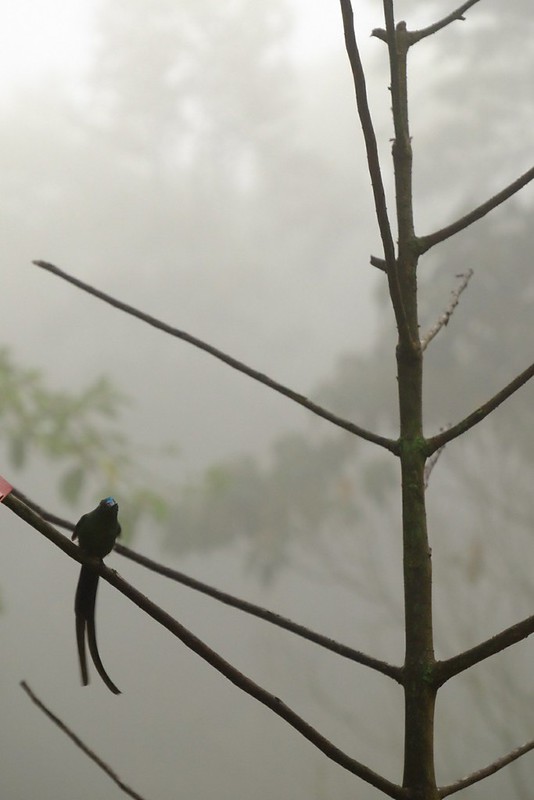 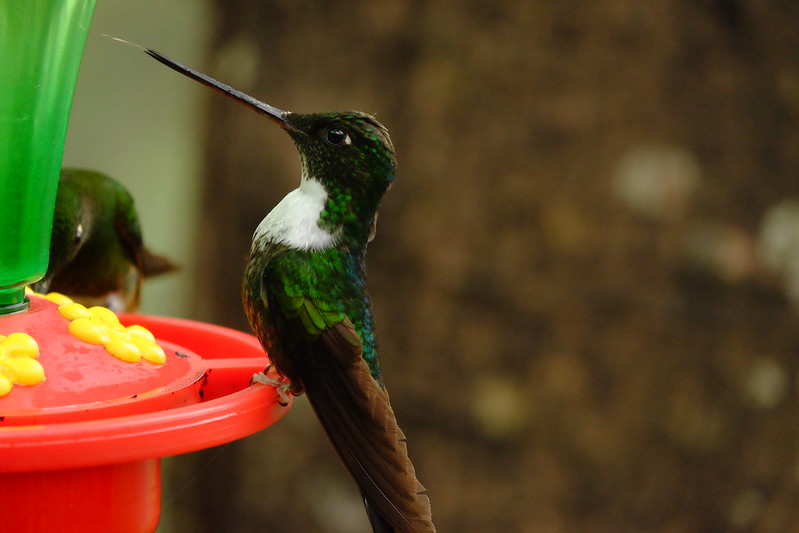 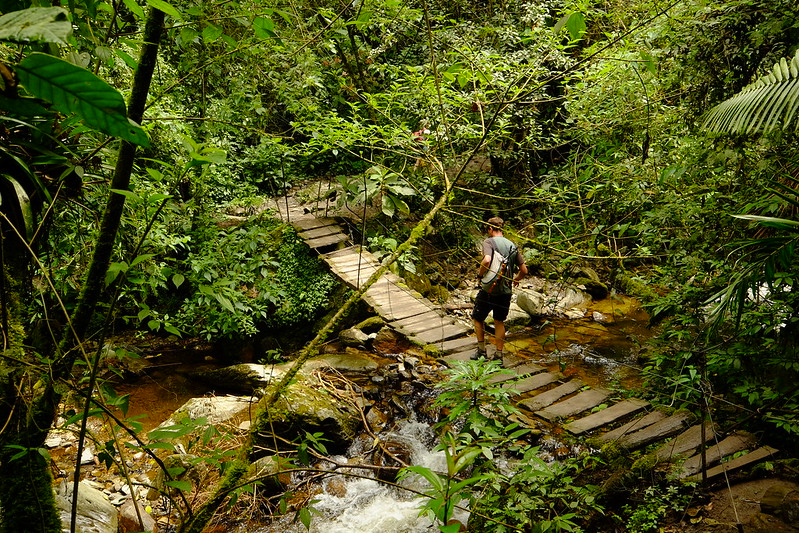 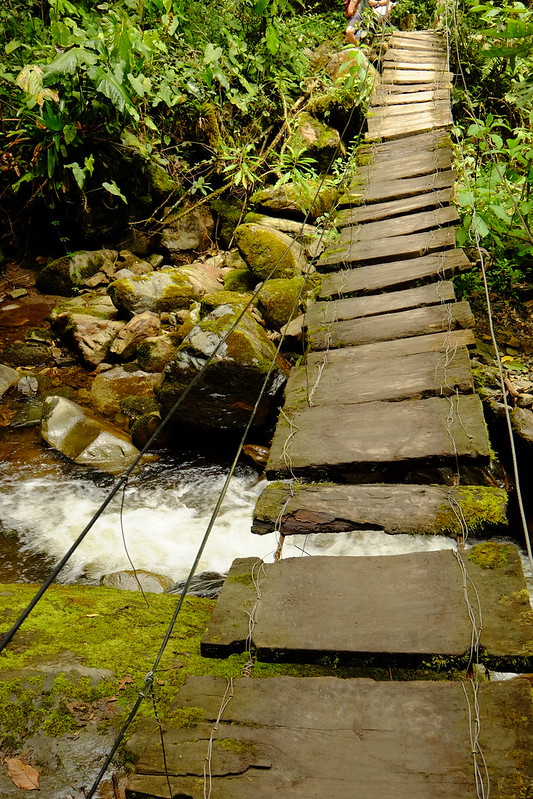 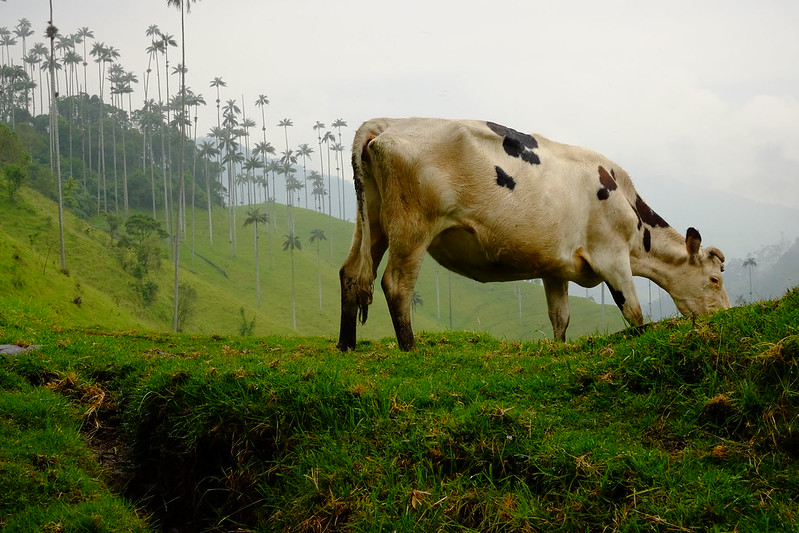 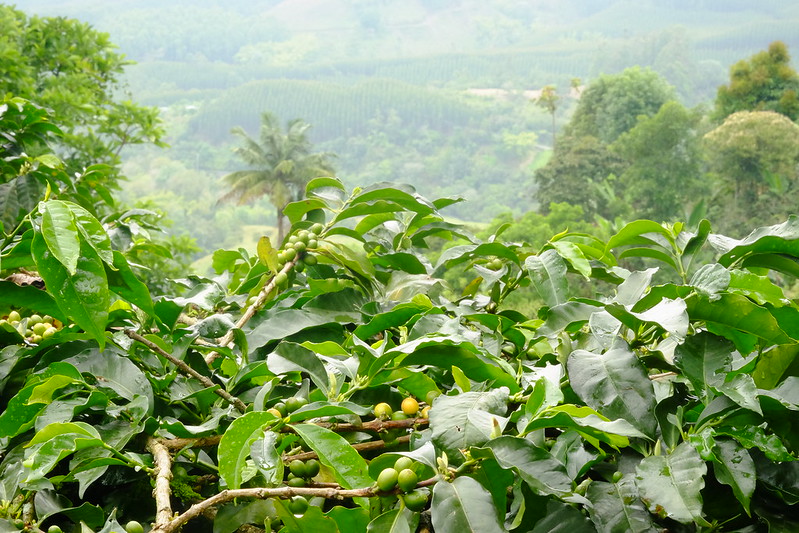 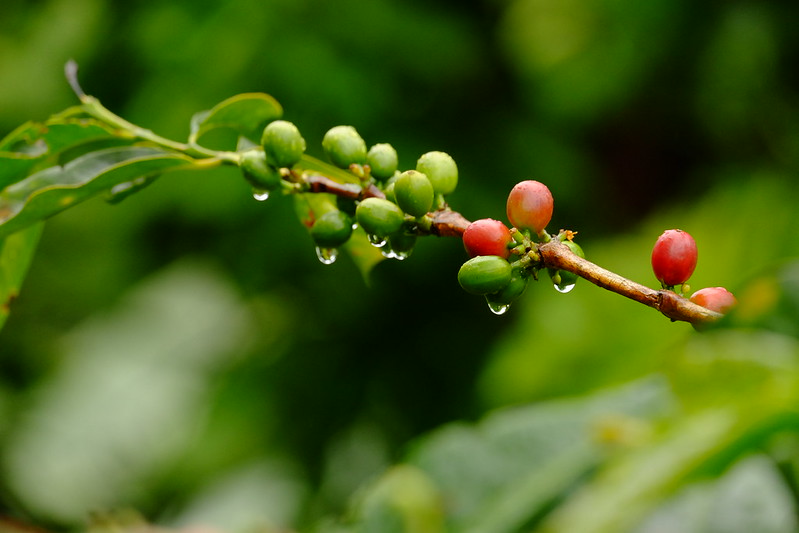 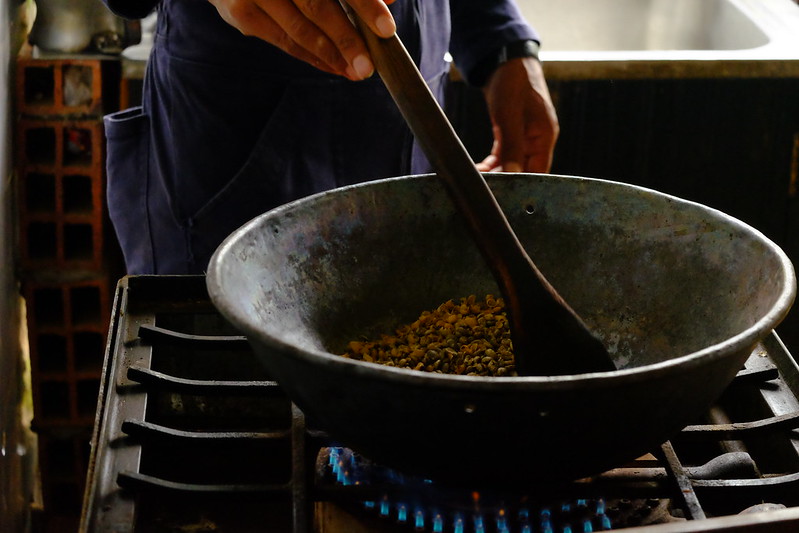 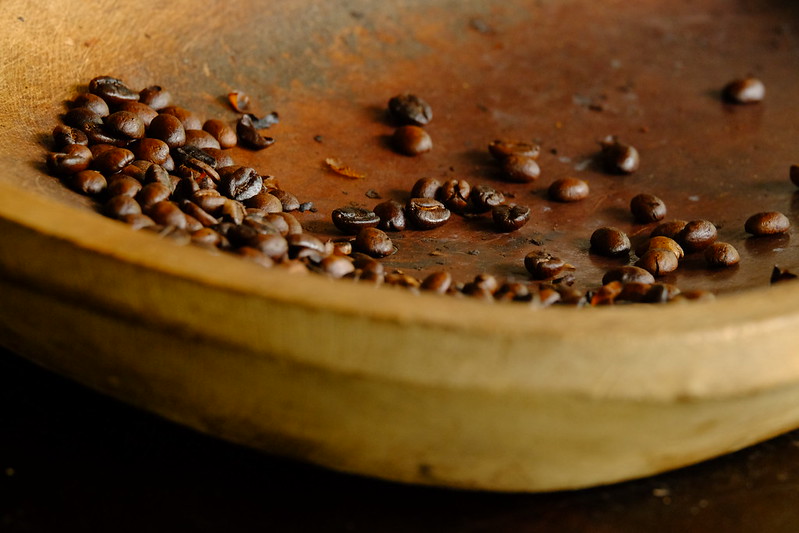 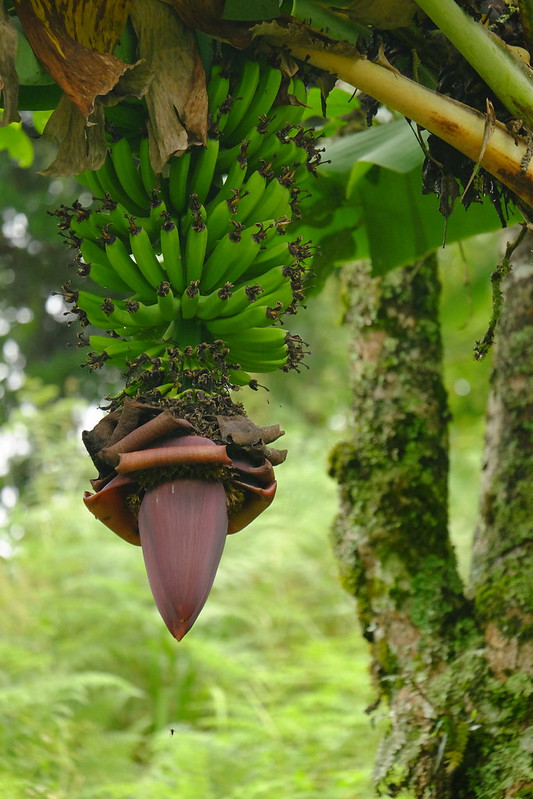 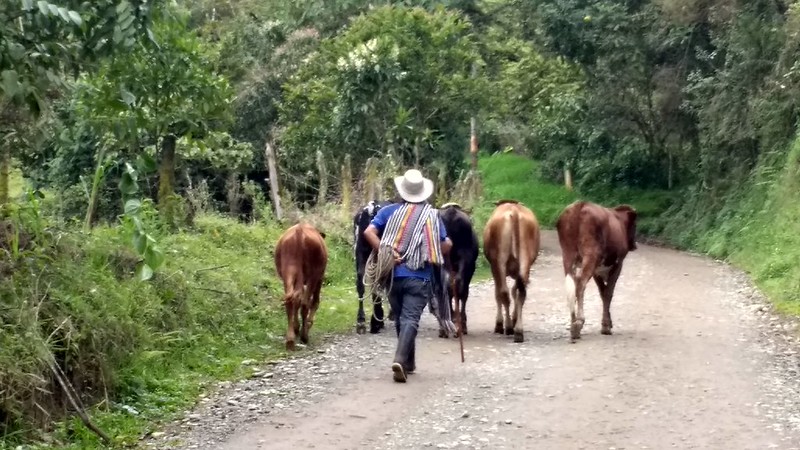 P.S. from Denise: We also went to a reserve and saw mushrooms for the first time in weeks, which deserve their own gallery: 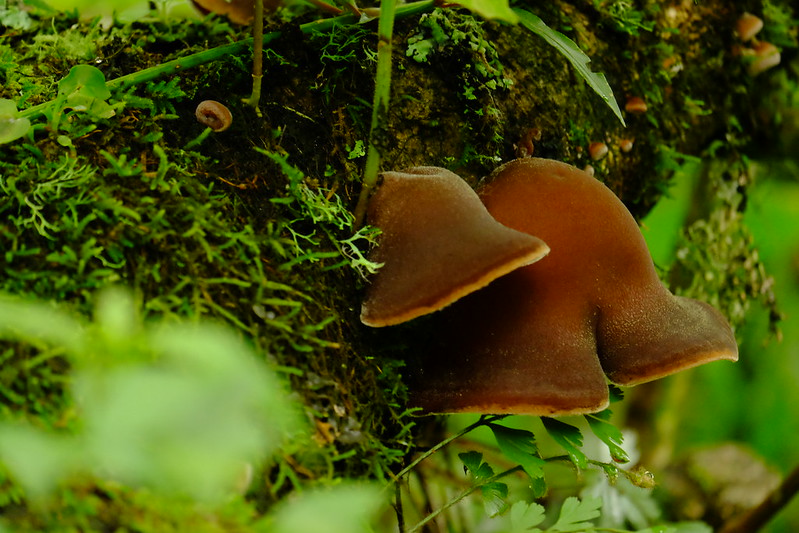 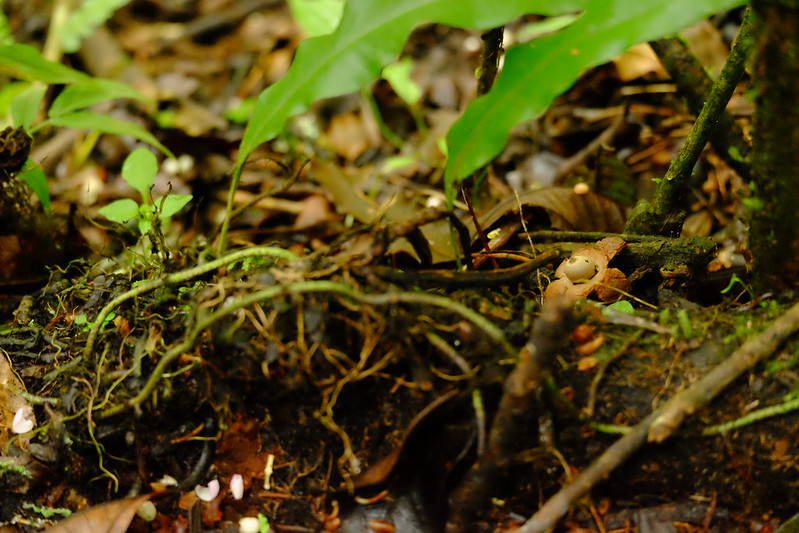 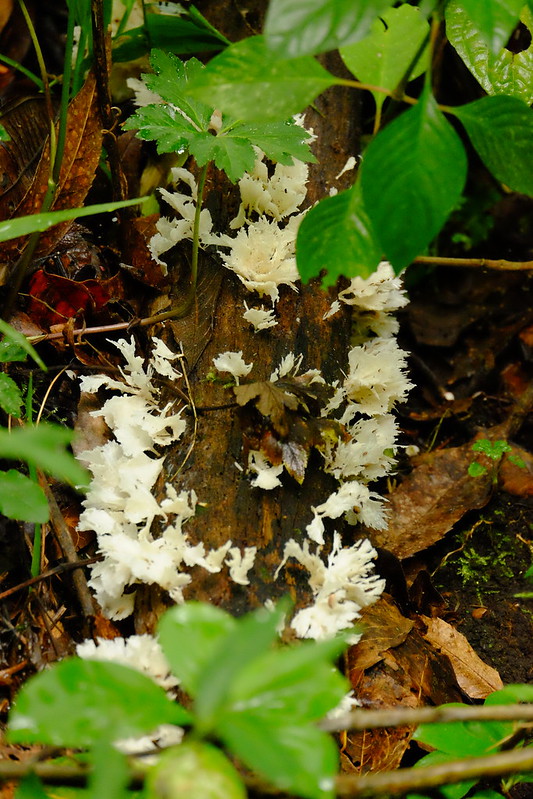 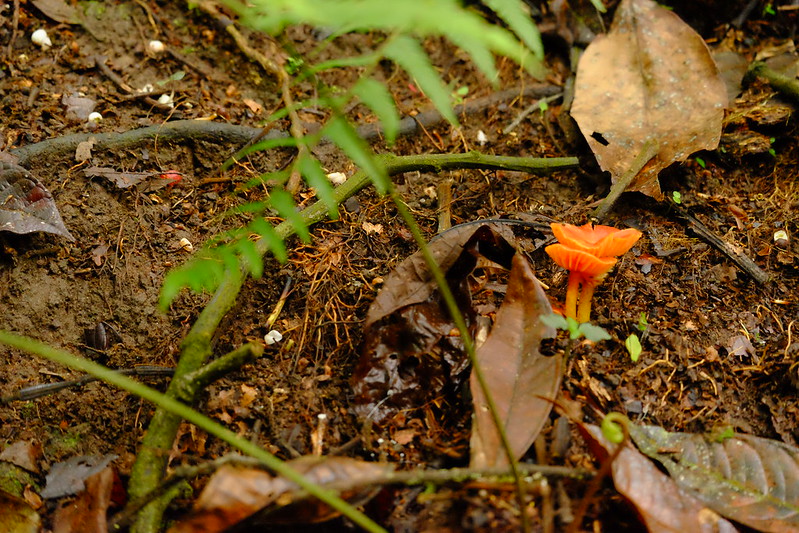 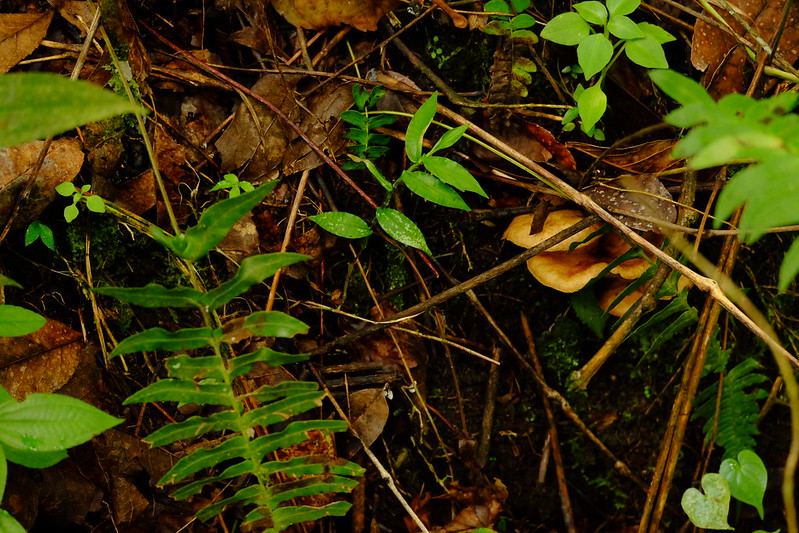 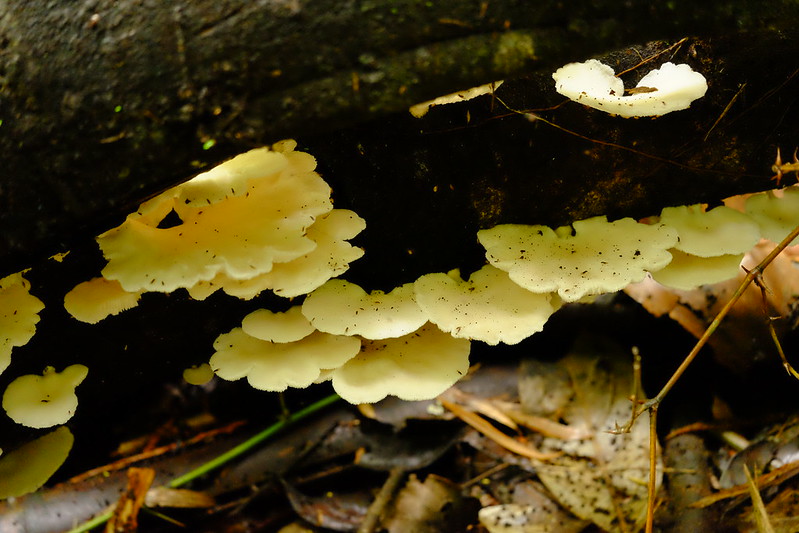 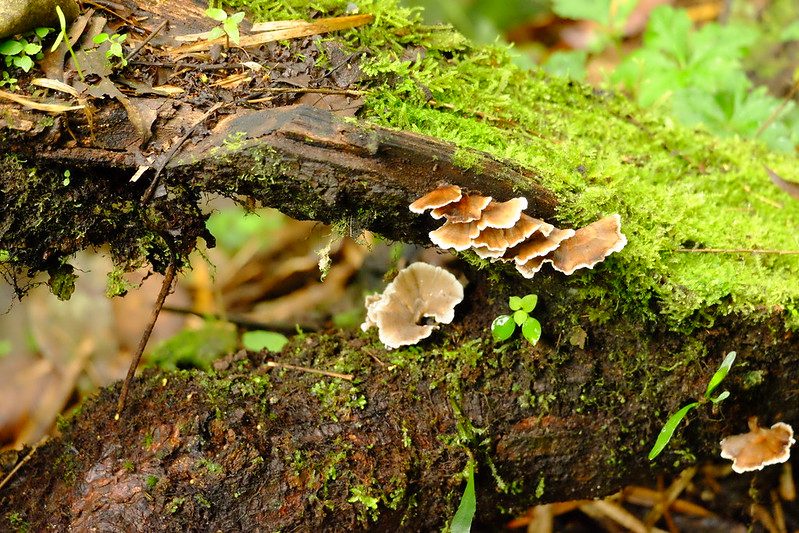 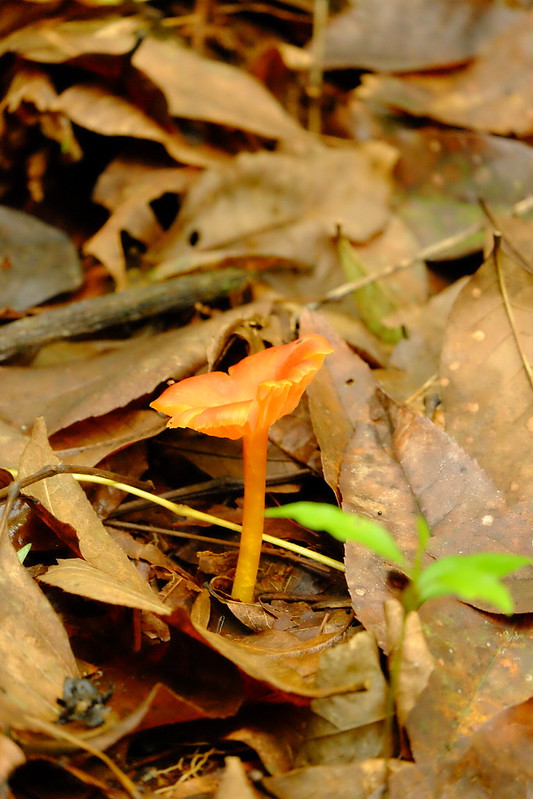 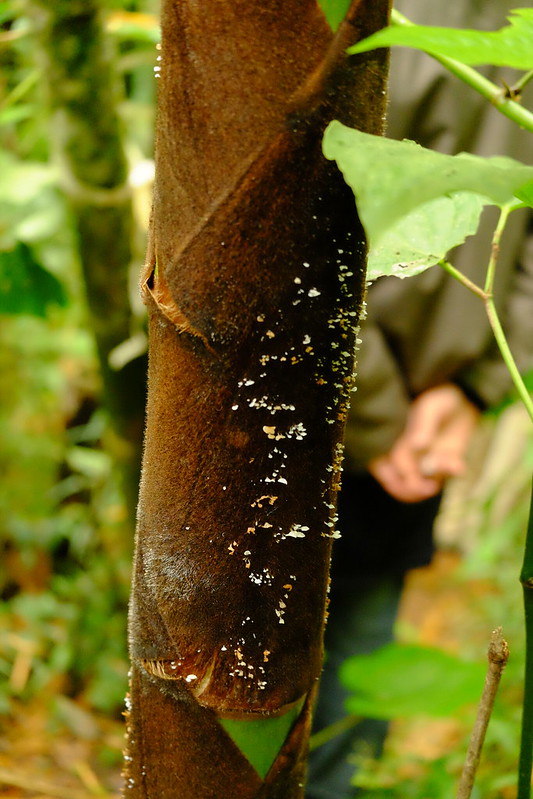 I sure hope you have a cute Indiana Jones type hat to wear! Would like to have seen you buzzing through the country riding/standing (?) on the back of a bumper! Bravo to you! Living your dream! (Love the bridges!)

I’m jealous! I feel like voyeur–but that’s the only way I will see what you are seeing.

Love that first picture with the tall trees. Reminds me a little of Dr. Suess:) The coffee sounds wonderful- yum! Hummingbirds?! Very fun. They have just arrived here in MN- got my feeders out. Glad to hear you are doing well.

I agree with Shauna–the first picture was amazing!! What’s better than coffee and hummingbirds?!? You are so living the (my) dream! Keep being safe and having fun.