You can take Wisconsin out of the boy, but in Uruguay you can’t take the boy out of Wisconsin. Uncanny resemblance to south central Wisconsin. Complete with round bales, Holsteins and International Harvester farming implements, it even had the trademark rolling hills with knee high corn fields just in time for the Fourth of July, er, December. I just sat there about ready to pinch myself but then there it was, the flash of a palm tree zooming by the bus window to bring me back from my revelry. Uruguay, which flew completely under our radar as a place to visit, surprised us. 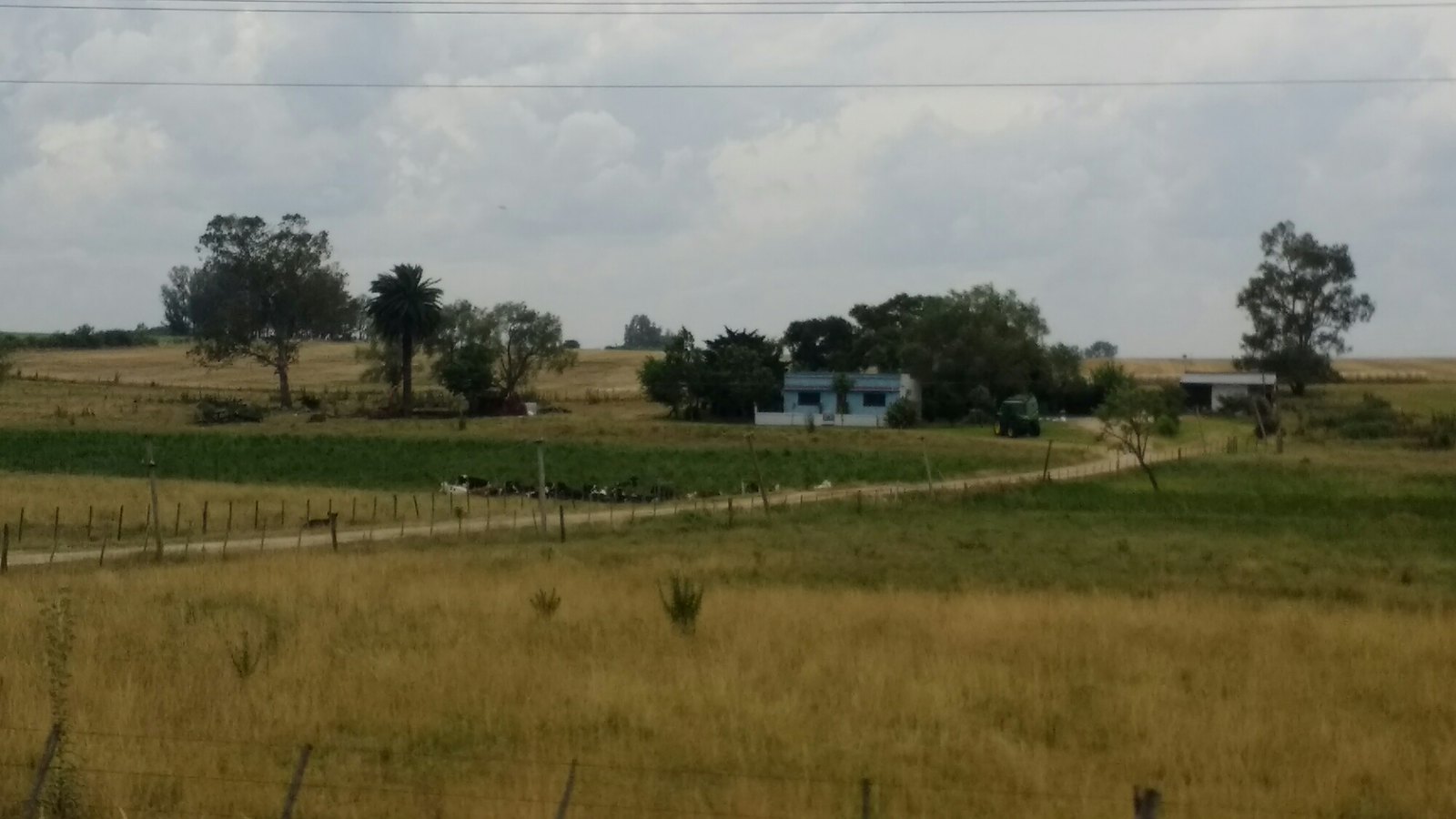 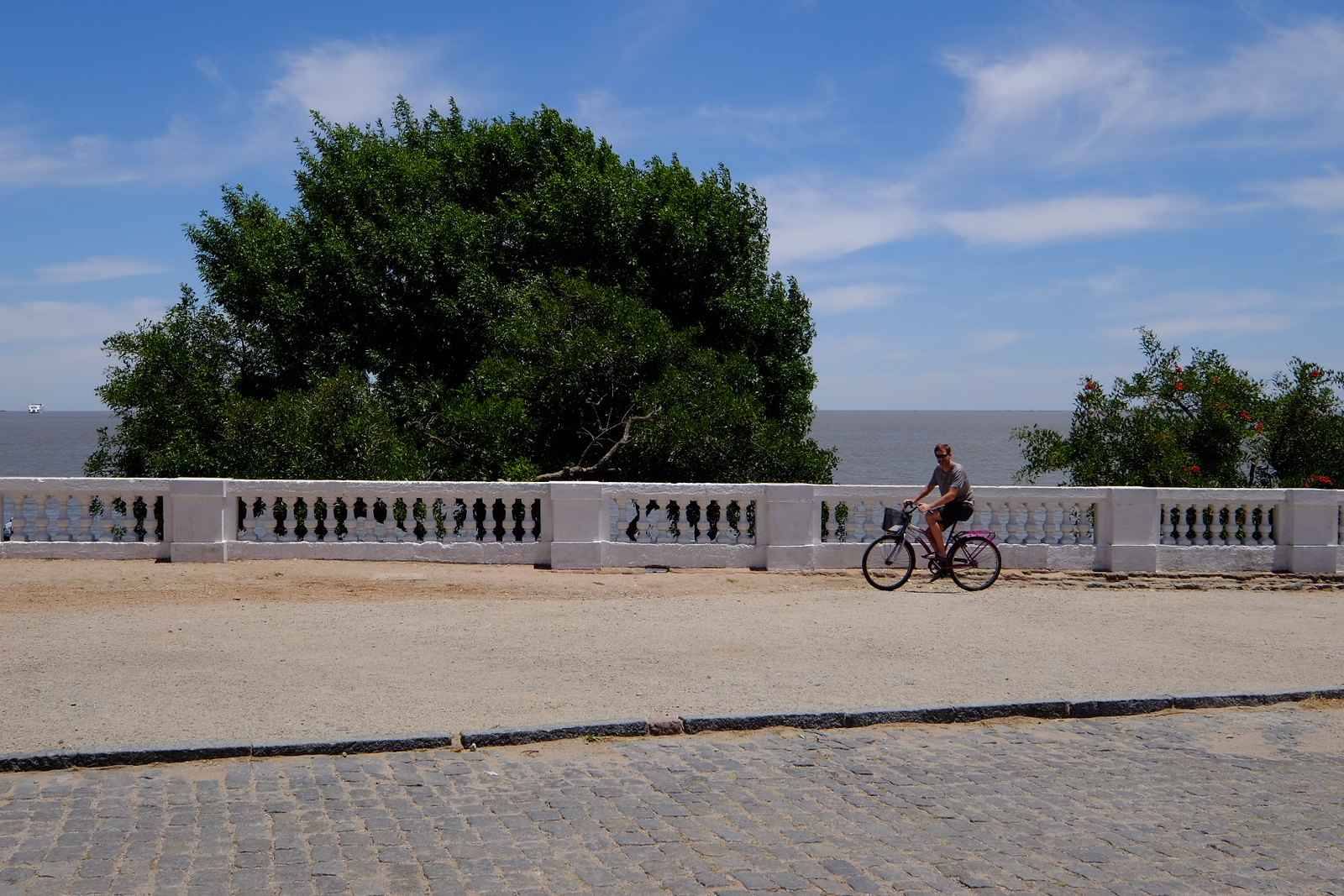 We visited Colonia del Sacramento, a Unesco World Heritage site, across the Rio Plata from Bueno Aires via an hour long ferry ride. Colonia is a beautifully preserved old Portuguese settlement that was built to counter the regional Spanish control. 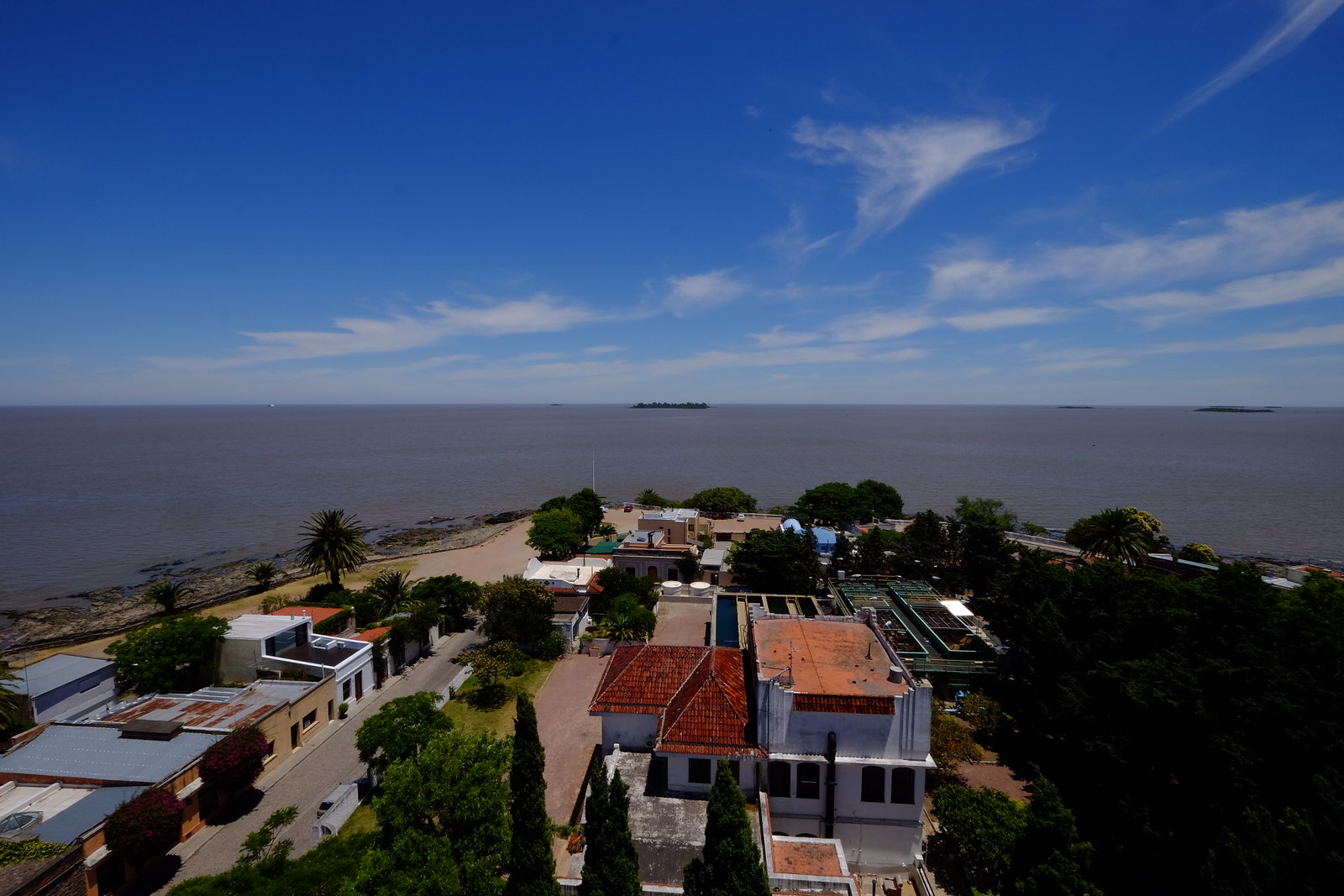 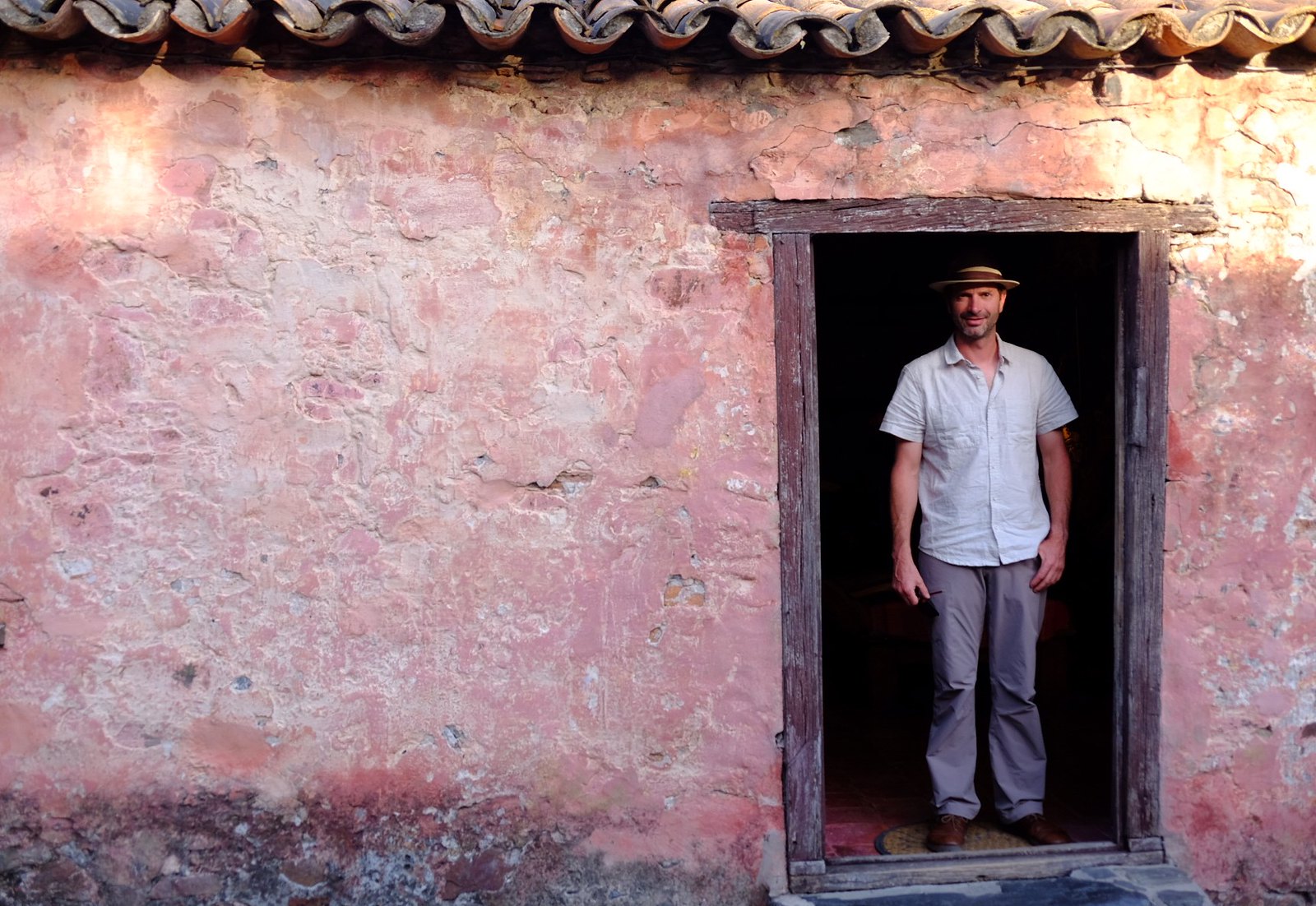 The old town is encircled by a two meter thick stone wall with some old cannons still in place. The town was very charming and we enjoyed one very memorable meal in a well preserved original building with the requisite ducking through small doorways.

One fine day we rode our rented bikes to a bull fighting arena and Denise even braved sneaking through the fence to get a look-see inside. She reported back to me, the big chicken who didn’t think breaking and entering was the safest choice that day, that the fighting area was surprisingly small. The interesting thing about this old bull arena was that it was completed in approximately 1921 and Uruguay banned bull fighting in 1923… And you thought the American stadiums were a waste of money!

One very early morning, Denise had acted upon one of her occasional and suspect urges to traipse around an area in the wee hours searching for a magical photo shot. But later and more importantly, where I had been just seconds before in a blissful and deep slumber, in burst Denise through the apartment door saying “Peter! Peter! I saw a puma!”.

Now, sitting up I looked at the tiny screen on the back of her camera and I saw this thing.. and it did look like a large cat. 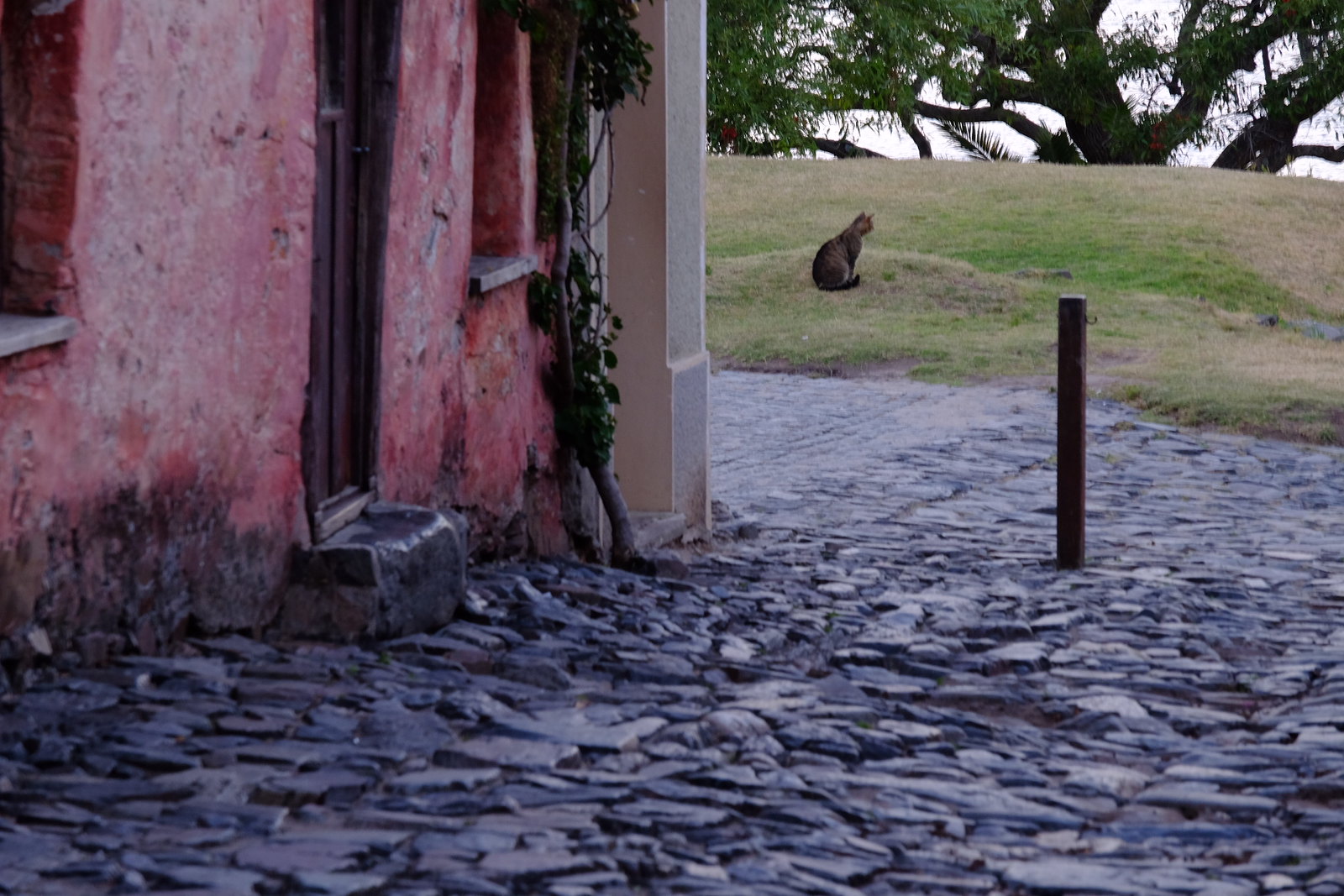 “Hrm,” I said trying to both uncloud my mind and buy a little time to think of a way to break my disappointing news to her.

“Well…. I don’t know, but it was big. I rounded a corner in the old town and saw this cat, which is way, way too large to be a house cat just past the end of the street. And because no one else was around and I didn’t want to get killed or anything, or disturb it really, I kept my distance and took a few photos. But I didn’t have the long lens! Anyway, later I ran into this guy sitting on a park bench and tried to ask him about this cat. I’m not completely confident in what he said, or even what I asked, but he pointed to a fist sized rock he had sitting next to him on the bench and I took it to mean that he knew I wasn’t a crazy lady making stuff up.”

We did some investigating and googling when we began to suspect that what she saw was actually a large Pampas cat, which are somewhat large, wild cats that live in the Pampas region. This was later confirmed, we think, when we saw a life-sized stuffed cat in a museum.

Next, we bus-ed up to Carmelo, Uruguay, or more accurately we bus-ed up through Wisconsin on our way to Carmelo, primarily for wine tasting and to catch a scenic ferry back to Tigre, Argentina. Carmelo is a sleepy town that has six wineries nearby, impressive sandy beaches on the river, and an odd animal reserve that had everything from ostriches to a llama and other animals we couldn’t identify. 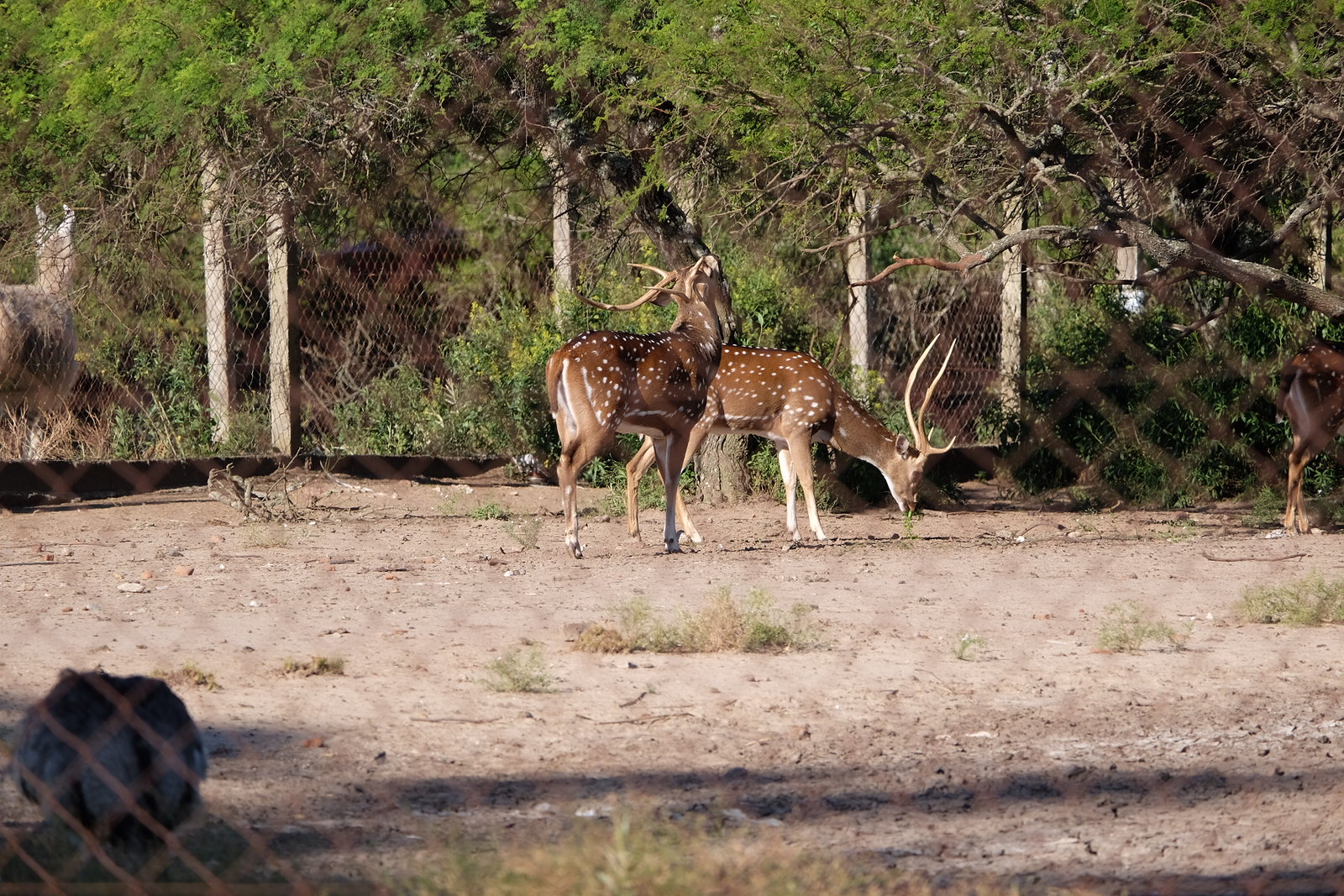 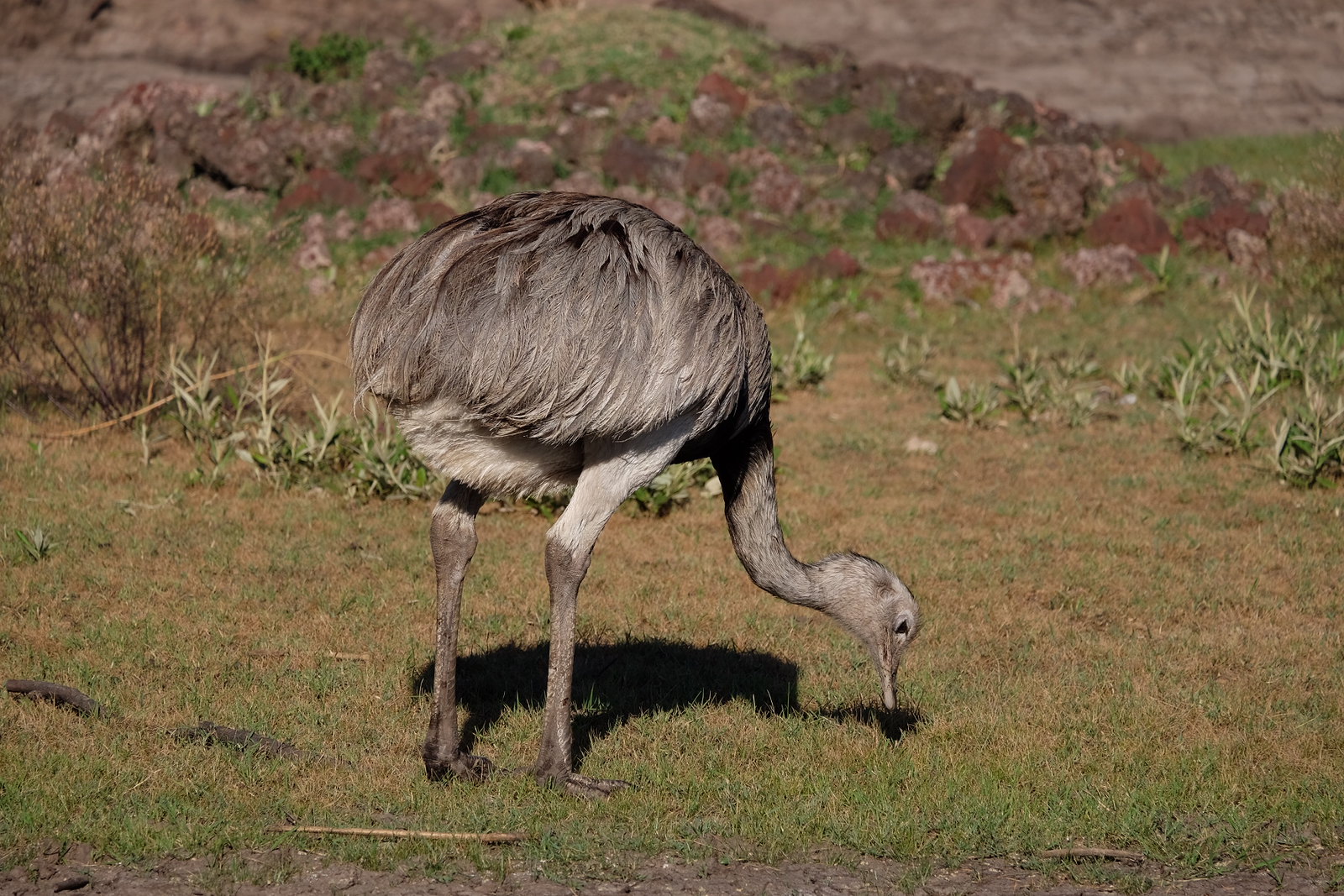 Uruguay is known for producing Tannat, a red Bordeaux grape that we’d never heard of before. We went to a winery to taste it, and it was quite good. Wine tasting in Uruguay is a relatively new concept and is kind of expensive. We paid about twenty five dollars per person, but you are basically served dinner; or at least we made dinner out of it. We were given a big plate of garlic toast and local cured meats and cheeses, and what ended up to be about four full glasses of wine each. Plus we had the place to ourselves and got to chat with the fifth generation winemaker, Diego, whom the New York Times wrote an article about a few years ago. All that for wine that costs between ten and fifteen dollars a bottle. 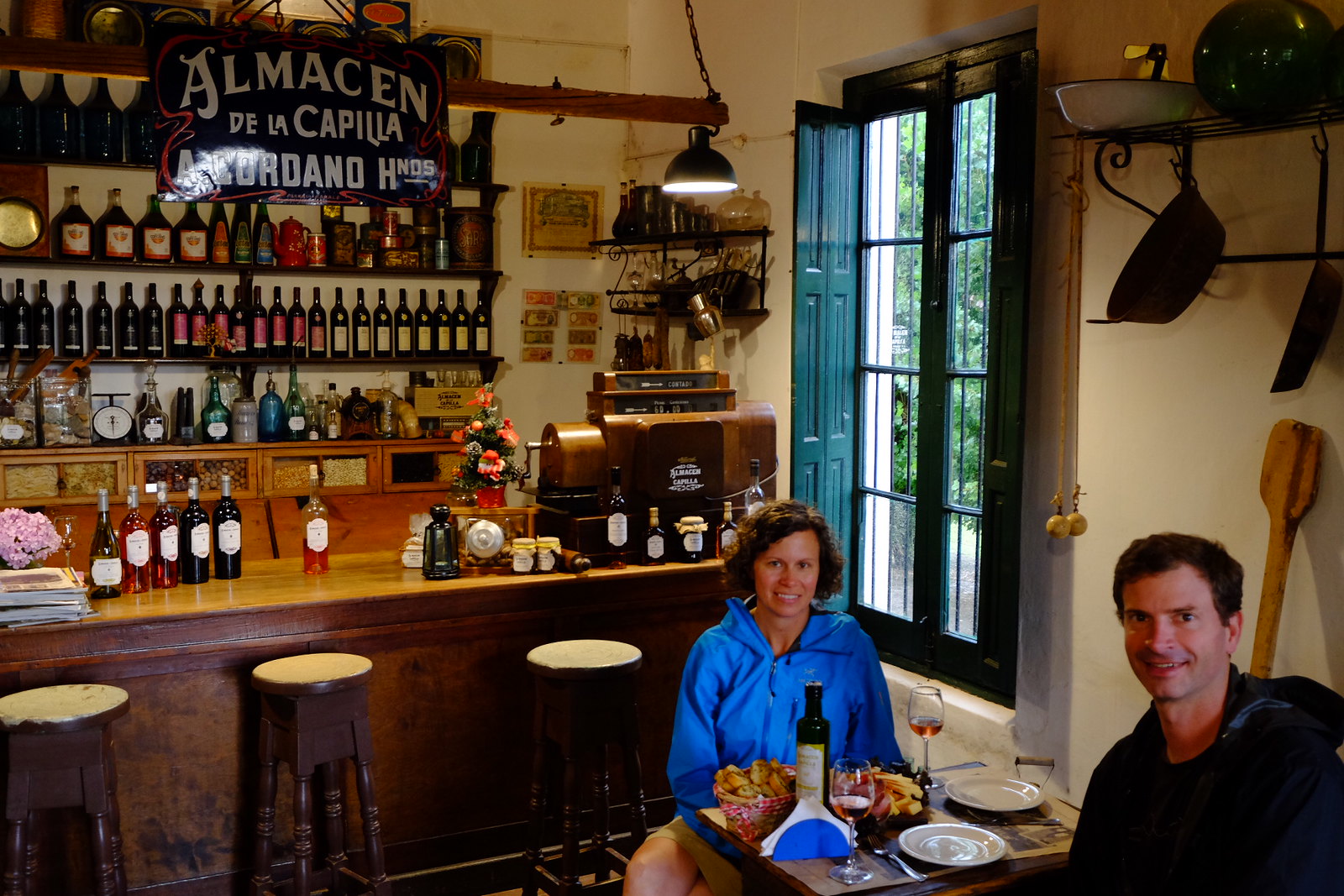 When we left Carmelo, it was via a very scenic ferry down to Tigre, which is best described as a nice place for Buenos Aires residents to escape to on the weekends, or a place for people who work in BA to live if they don’t want to live in BA. In other words, not a ton to do for tourists.

Lastly, we were graciously offered a car ride all the back into Buenos Aires by our Tigre Airbnb host. Our car ride turned a little disappointing because we had difficult time forcing through a conversation about political policy via spanglish and google translate. I think that our experience down here would be that much fuller if we had a better command of Spanish. But finally in Buenos Aires for our last night before we headed to ANTARCTICA!!, but that’s a post for another time. 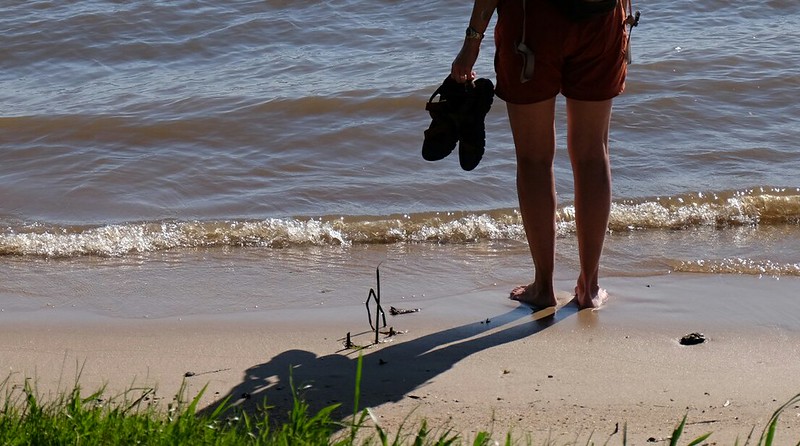 I’m having a wonderful time reading your blog. You will always have this in your life and will remember things with a flash of memory even years from now. I’m so glad you were able to do this for yourselves. Have you got set dates for when you want to be where or are you just winging it? Do you have to be home at a preselected time? Whatever you’re doing, it looks wonderful. Enjoy every minute.

Loving your posts, guys. My favorite has to be the puma story. (Denise, you are lucky the old man didn’t bean you with the rock!) Be safe and looking forward to reading about your next adventure.