It’s one of those places in the world that is a mecca for travelers; South America’s equivalent of Egypt’s pyramids, Rome’s Colosseum or Wall’s drugstore. One of those places that just screams adventure and travel. After the Amazon, we were ready to leave South America, but we just couldn’t do so before visiting the heart of the Inca empire.

Most paths to Machu Picchu go through Cusco. To help the pilgrims adjust, standing as it is at about 3,400 meters, airline employees greeted us by handing out coca leaves to help acclimate to the significant altitude. It was in Cusco that we spent the better part of five days wandering around and admiring the former capital of the Incas and their amazing stonework. 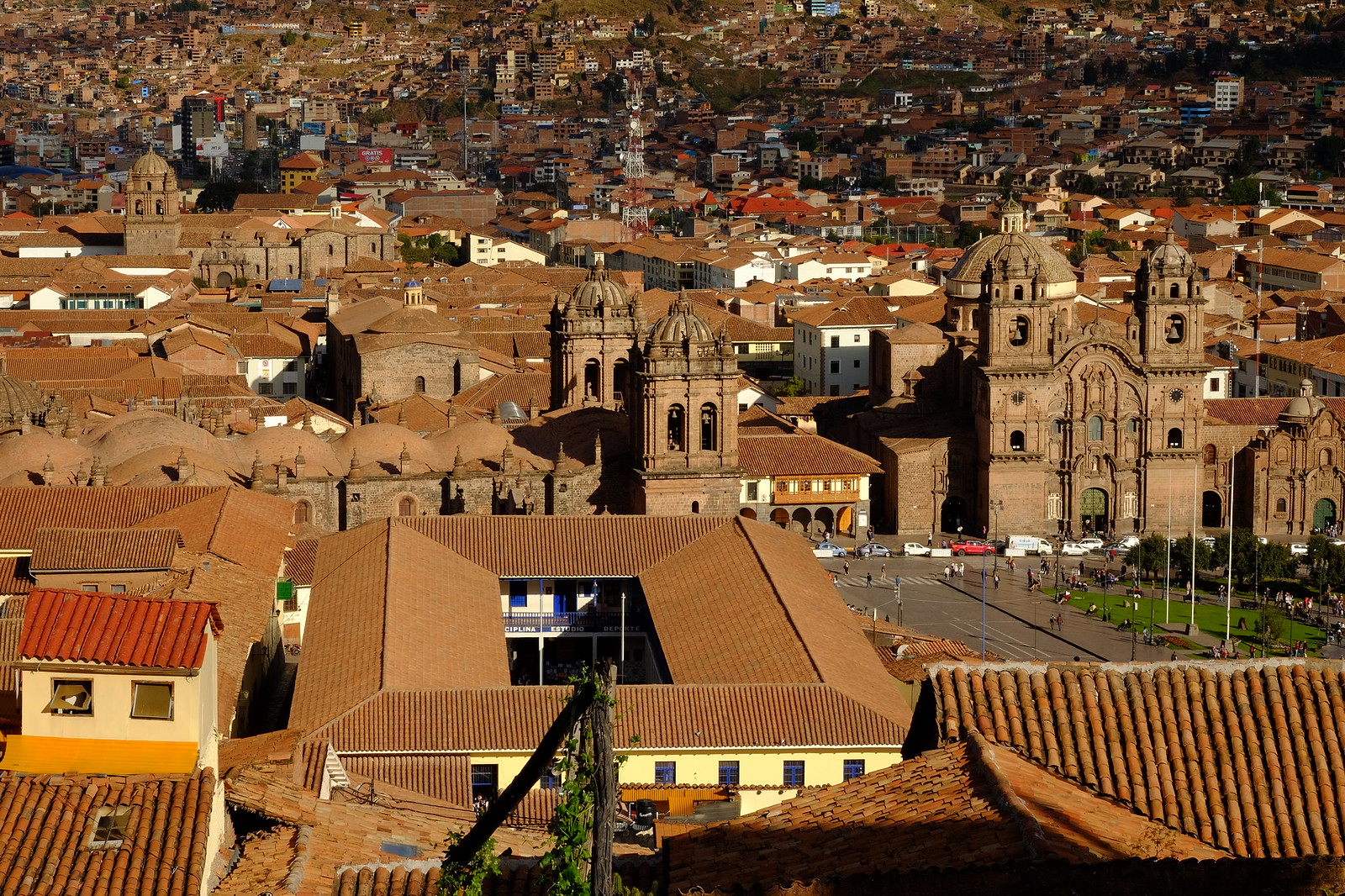 Cusco and a few of the Spanish churches. 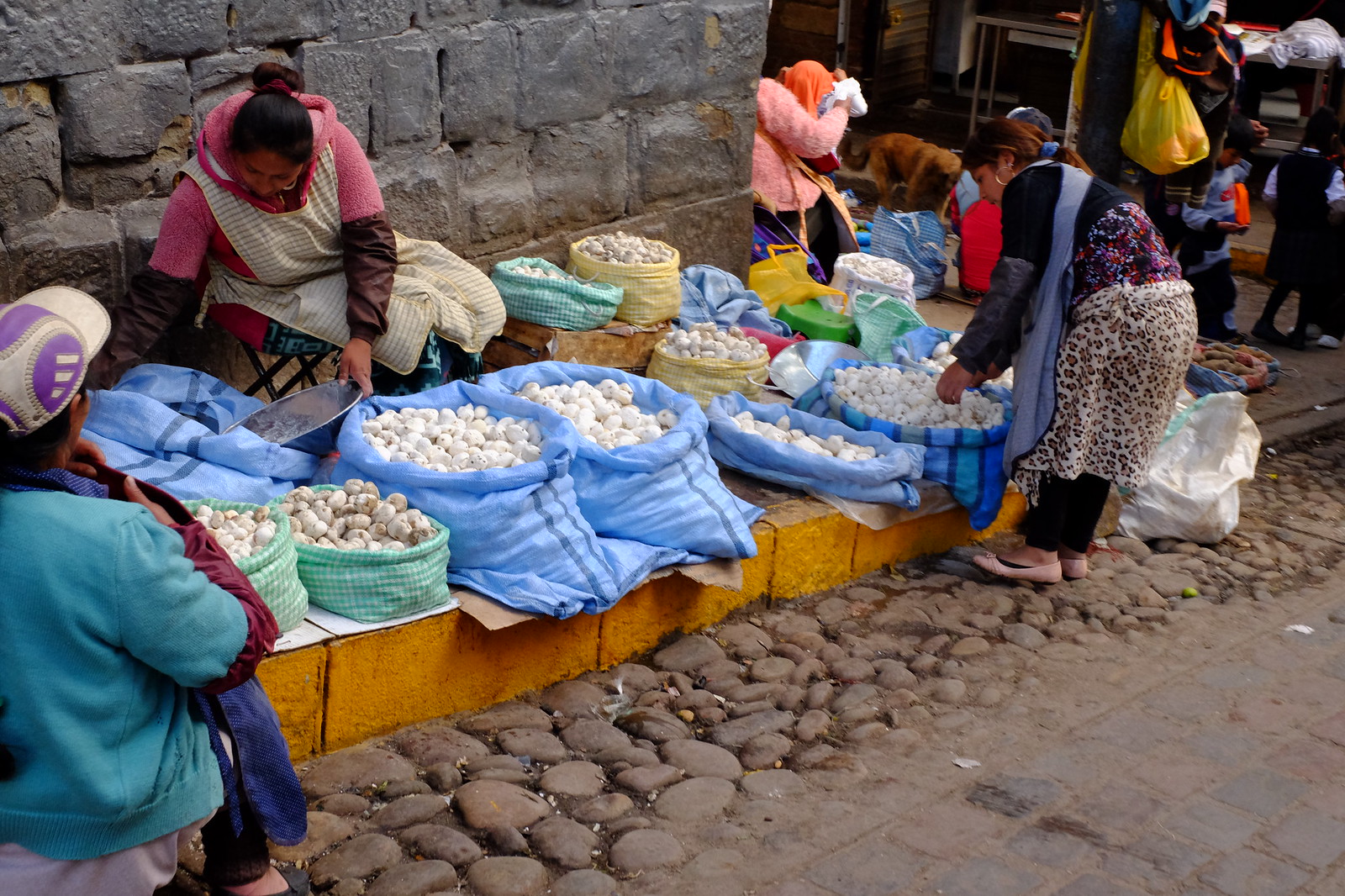 Presently, most of Cusco’s old sites feature the Spanish buildings that were built on top of or over the earlier Incan buildings, impressive though they were. The Spanish wanted to win over the hearts and the minds of its newly acquired subjects and one way they did this was to impress them with awe inspiring large and beautiful churches in which to remind the savages how much greater their God was. While initially I felt that oft-consuming notion of how sad it is that we lost such an interesting culture, the same sadness when I read about the Romans for example, the feeling died fairly hard one early afternoon as a pair of pick pockets of doubtless Incan descent outwitted yours truly and stole my cell phone. Following the incident my feelings turned, temporarily at least, to one of “serves you all right!” To add insult to injury, Denise also cracked a tooth while eating rice that contained an errant bone, and was in for her first crown.

Before leaving Cusco, we picked up a little information about the Incas themselves. They ruled a vast expanse of territory by the time they succumbed to the “Guns, Germs and Steel” of the Spanish, but surprisingly, the empire only existed for about three hundred years (I’d recommend checking out Jared Diamond’s book if you have not already). It had started out on the shores of Lake Titicaca and spread southward to Santiago de Chile and northward to large chunks of Ecuador. Despite being fantastic goldsmiths, master stoneworkers and road builders, surprisingly, they had no written language so left no written records, and never advanced past using stone tools. 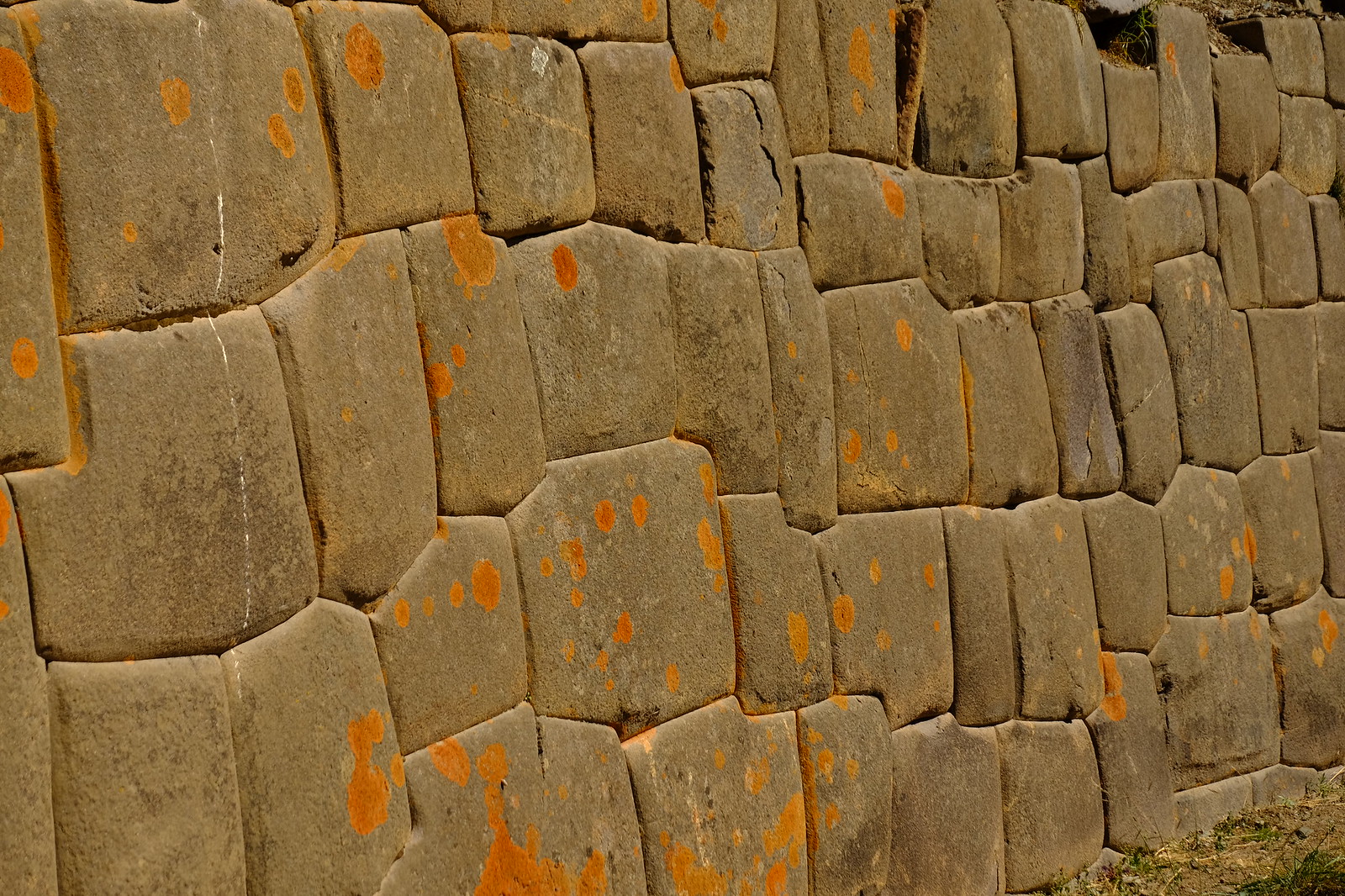 Original Incan stonework. You cannot get a piece of paper between these rocks.

Acclimated, we left Cusco to go see the world famous site. Our first stop was in the small town of Ollantaytambo. Ollay, as the locals refer to it, is the only village to still be living as the Incans had lived. As luck would have it, Ollay was in the midst of a four day religious festival as we arrived. The streets filled up with folk dancing, folks drinking and eating and there seemed to be events running every day. 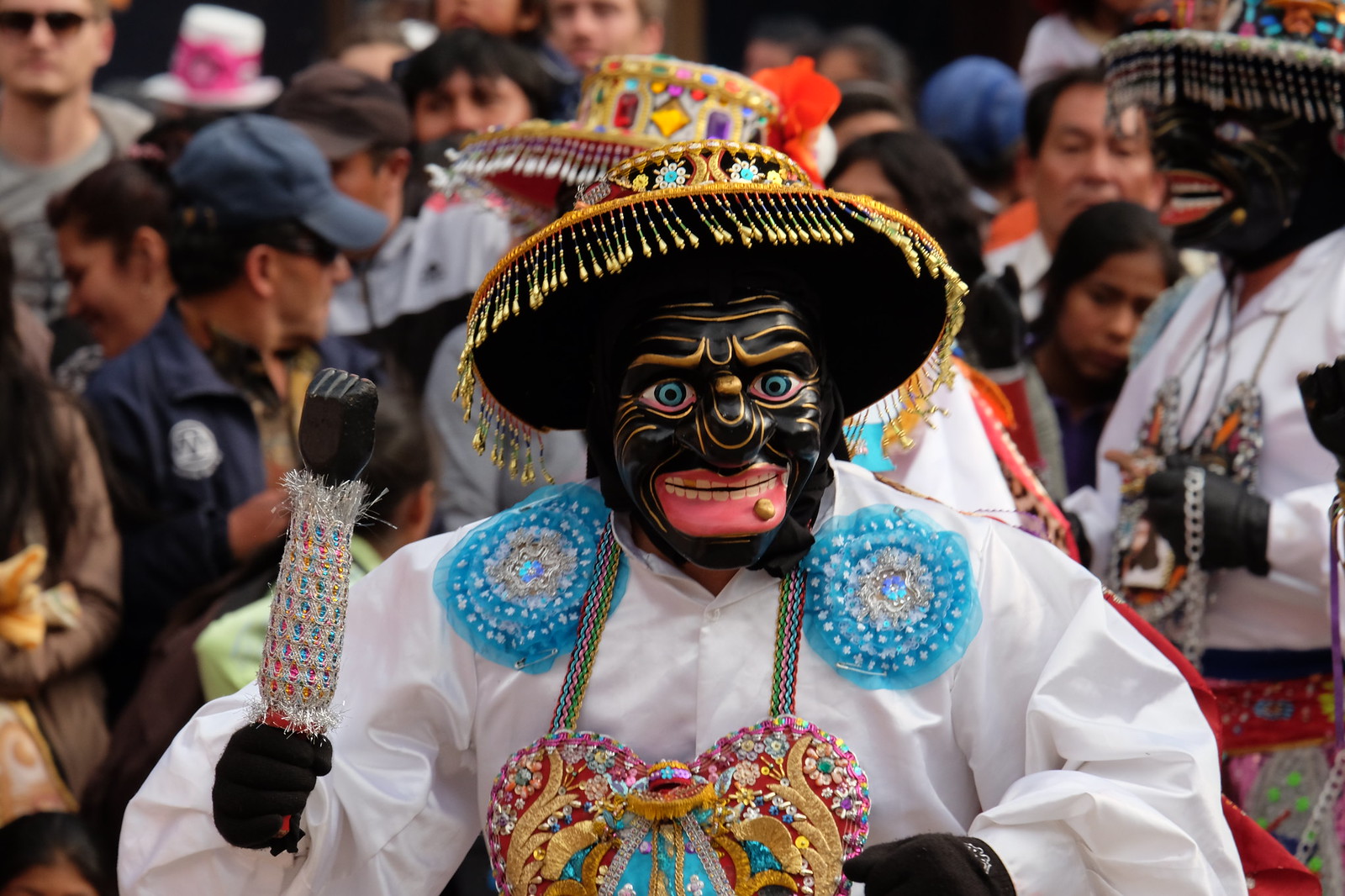 The festival entailed people dressing up in really colorful costumes, dancing, performing, and drinking at night.

From here we took a short train ride to our next stop of Aguas Calientes, or Machu Picchu town as it’s also referred to. We had decided not to do the fabled Inca Trail as currently you can only do it guided and needed to reserve a spot months in advance during the high season. Aguas Calientes is the final whistle stop before you head up to the site. The town, though touristy, had plenty to recommend it with lots of restaurants and a little market. We wanted to climb to the top of Machu Picchu mountain which rests behind and above the site itself, so we justified our decision to take the early morning bus up to Machu Picchu. While riding up in our seats watching other hikers labor up the hill, I did feel like a fraud, but this feeling didn’t last and I was later glad I had saved my knees for Machu Picchu mountain. Because I needed them. The site opens up at six in the morning and people start queuing up for the shuttle at four a.m. or earlier as the first departures leave Aguas Calientes at about five or so in the morning. We found ourselves in line with hundreds and hundreds of other people at around 04:30 as we waited for the first bus. 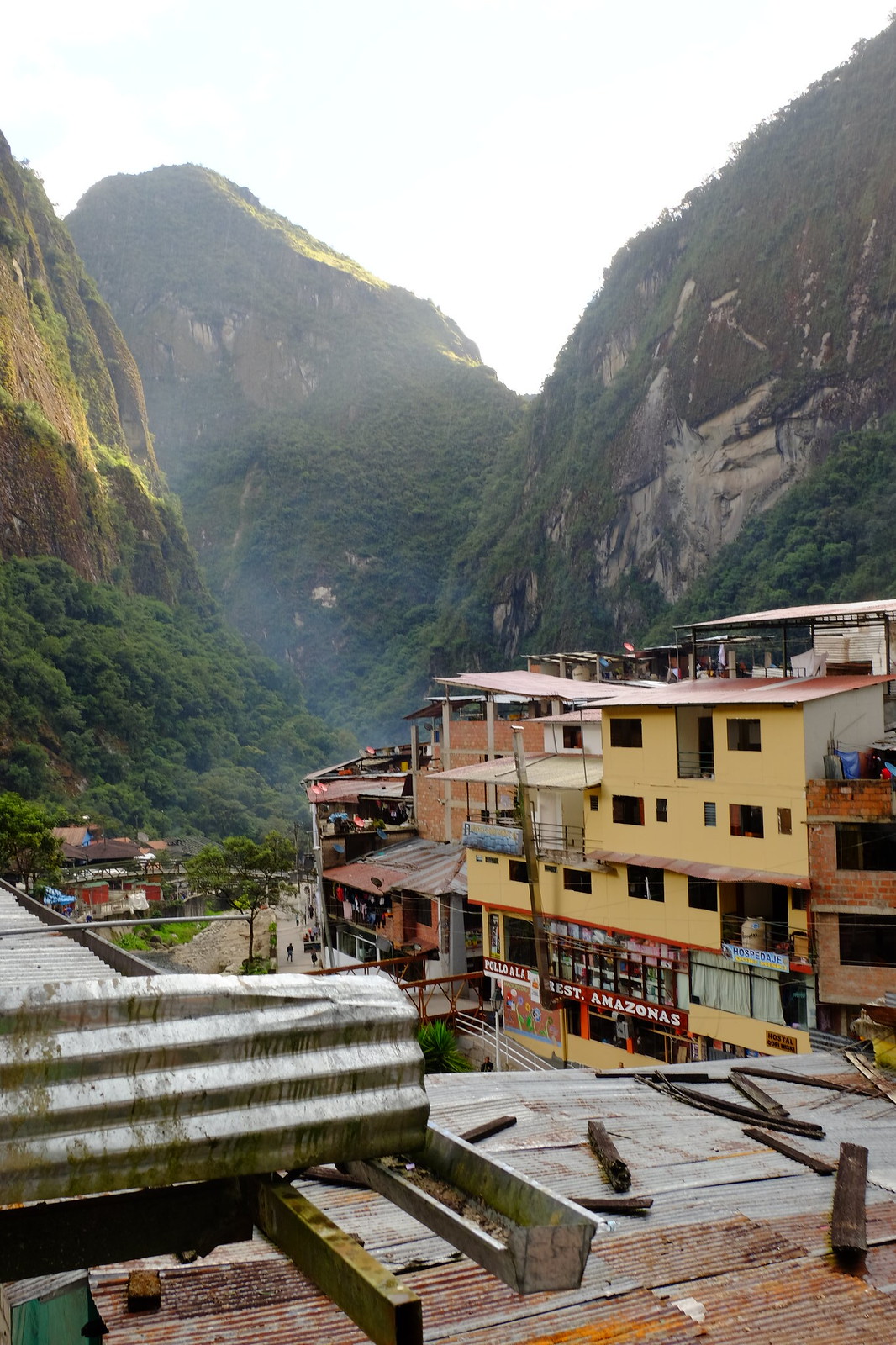 Aguas Calientes, a not so beautiful town set in a gorgeous valley.

We hired a guide because of the extra depth of understanding you can’t get without one, and she told us a couple of things that were new to us. As expected the site is both magnificent and crowded. But by arriving early enough the crowds do not diminish the experience all that much and you are left with the magnificent. The key, as we witnessed, is to get through the site before about 10 in the morning. By then, you should be hiking up one of the two mountains that surround the site, then come back to the site after about 2 or 3 in the afternoon when the Cusco day trippers head back to their respective buses. We also took the side trip to see what they call the Sun Gate, which I guess could be considered the official front door during the days of the Incas. 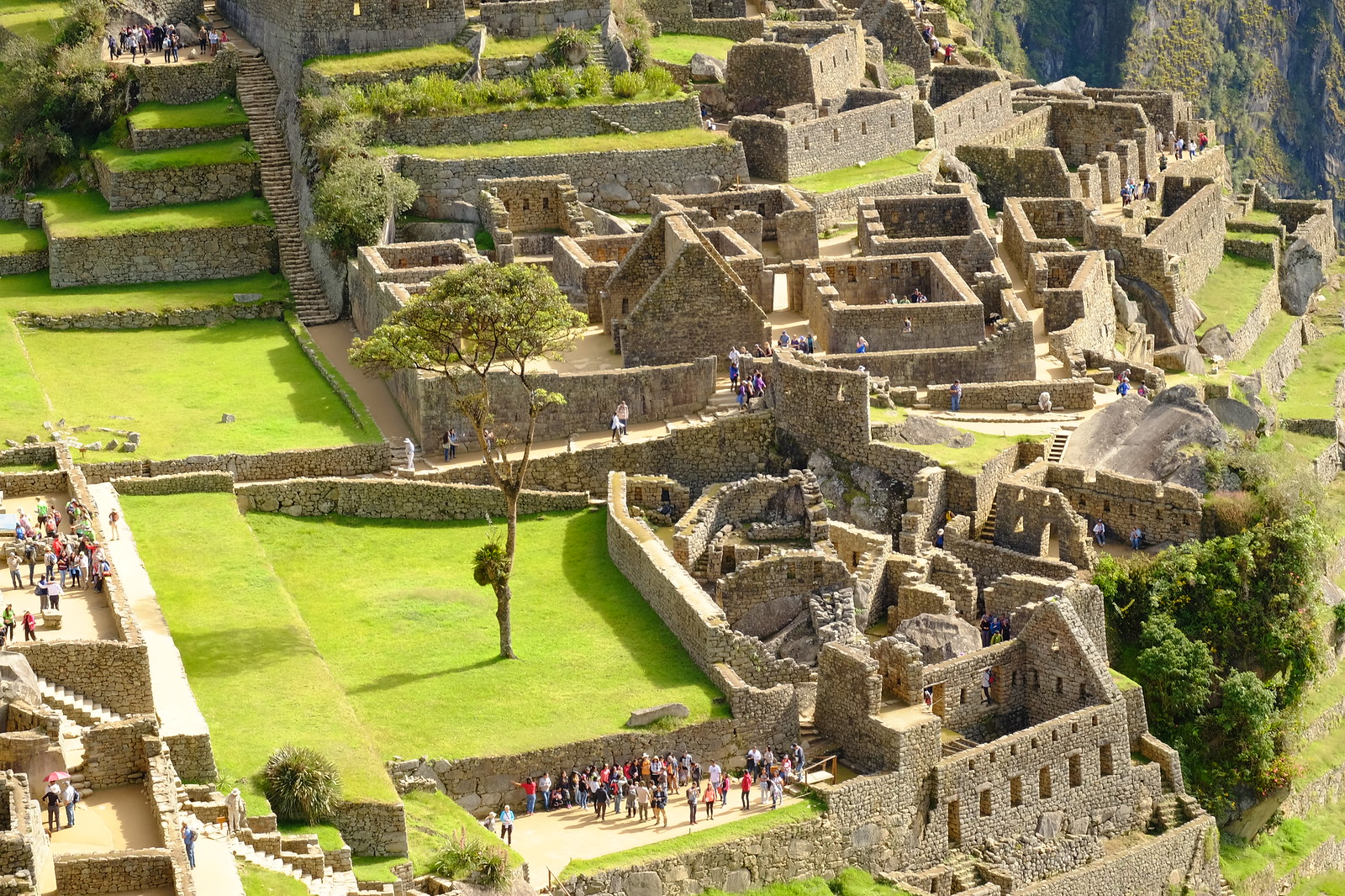 Machu Picchu is so well preserved because the Spanish never found it.

Machu Picchu itself is believed to have been a university of sorts concentrating on learning celestial bodies and from them gleaning insight into their calendar. But the capital was indeed Cusco, which had a population of about 150,000 inhabitants at the time the Spanish crashed the party. The old town of Cusco was shaped in the likeness of a puma where the head is an old temple, actually dating to a time before the Incas themselves. But in this temple you can see much of the very tightly fitted stonework the Incas did, which by the way is mostly reserved for buildings that dealt with religious purposes. It’s a mystery debated by archaeologists as to how exactly they cut these stones with the tools the Incans had. The stones very much appear to have been cut, not chipped away at by another piece of stone. 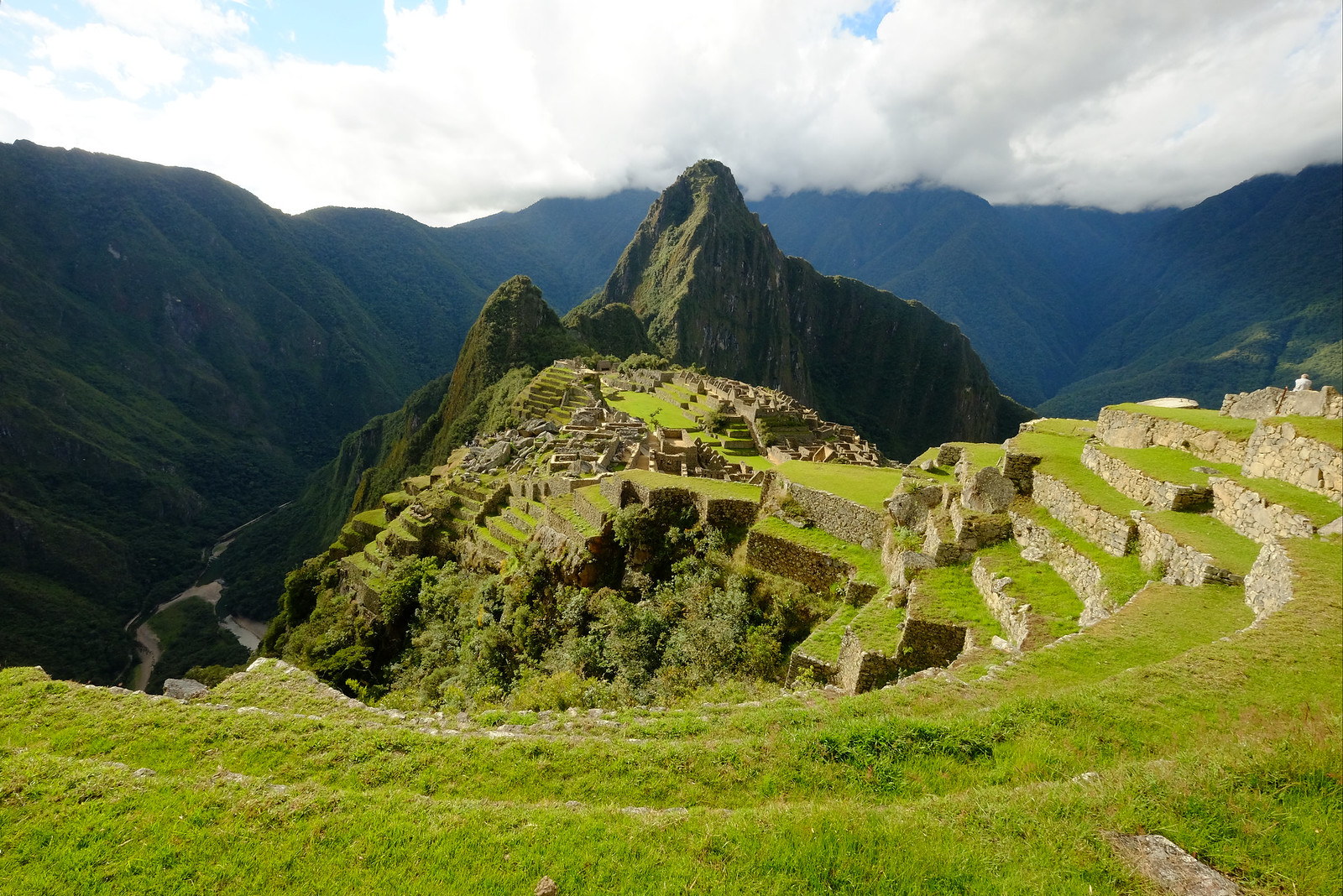 Machu Picchu in the late afternoon after most people had left.

Our trip back to Cusco was equally thrilling, as part of the four-day festival we were treated to our very first and only bullfight, with my only other experience being a Hemingway book. The bullfight was entertaining, and genteel as the bulls were spared.

Next up we took a day tour/taxi ride back to Cusco via the Sacred Valley, stopping by a few very interesting Incan sites, including these circular fields that looked more like a stadium with four and five foot retaining walls. Apparently each of these layers provided the Incas with a separate mini-climate in which they could experiment with different farming techniques and crops. Proving beyond doubt, to me, that the Incans were at their very heart an agrarian-based society. We then proceeded to see the ancient salt “mines” where a natural salty spring floods fields of mud paddies, similar in a way to a rice paddy, and when the water evaporates leaving behind a muddy salty mixture that is made into salt. They are still in use today. 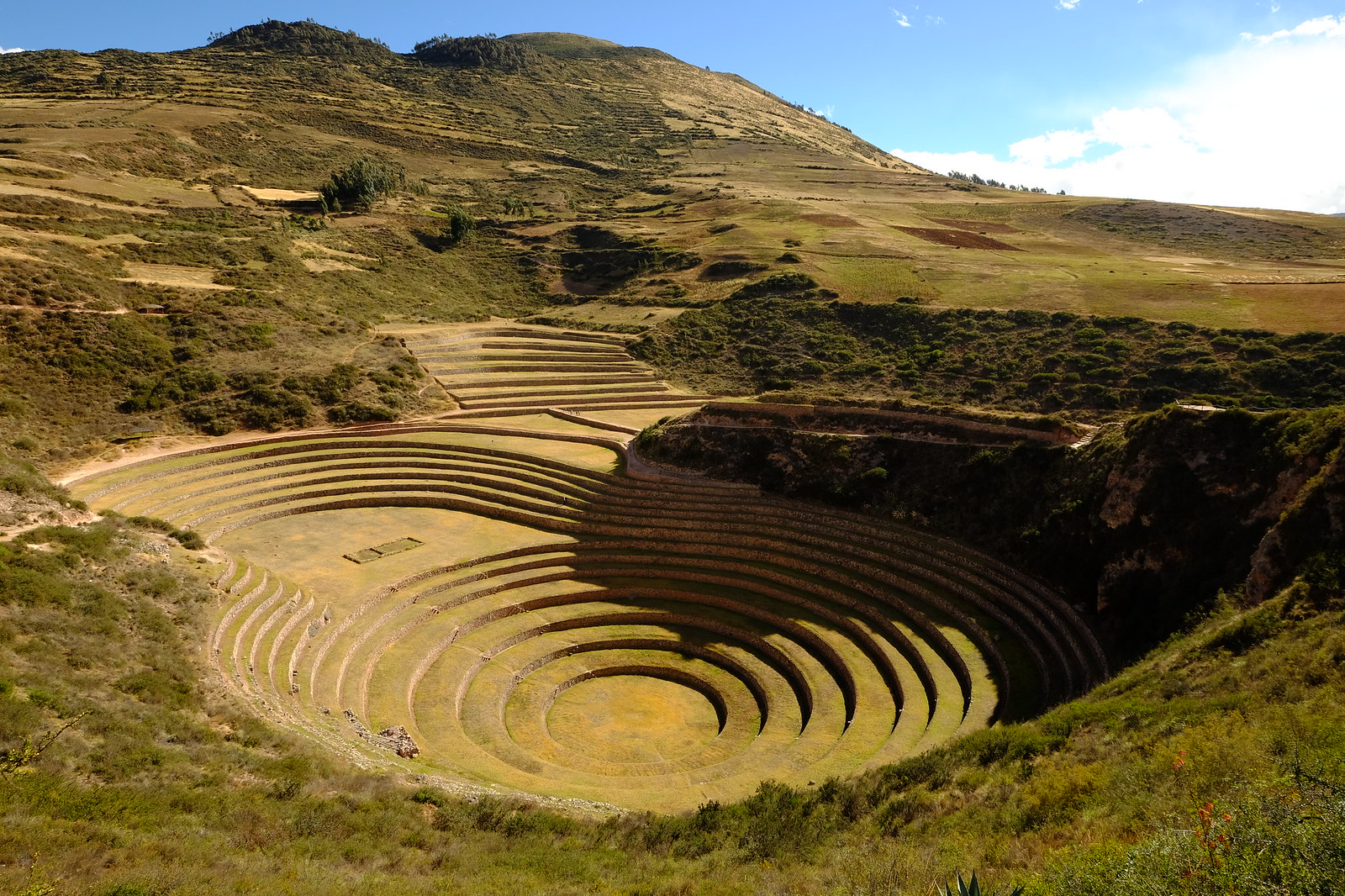 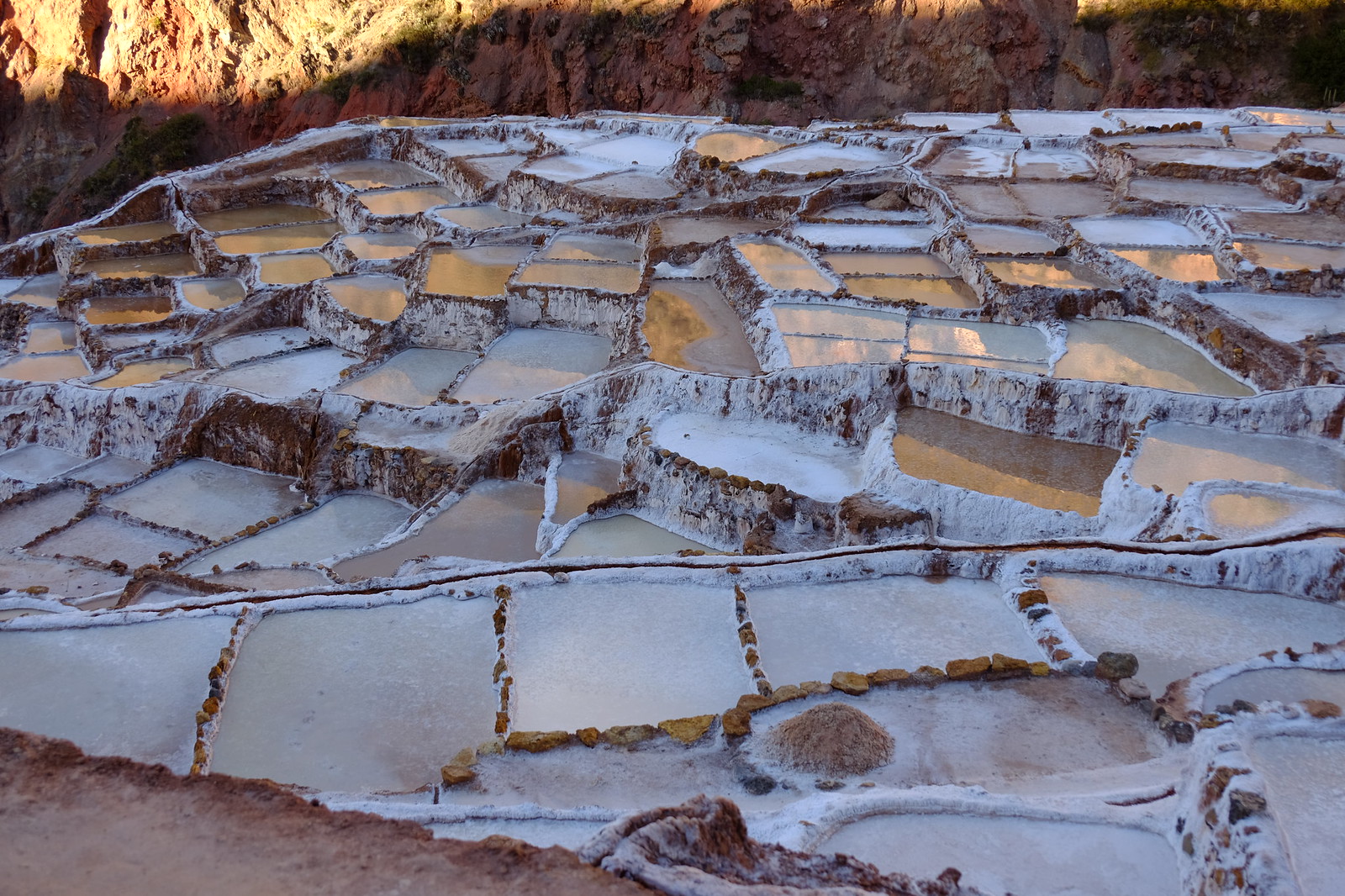 Salt pools that are still in use today. 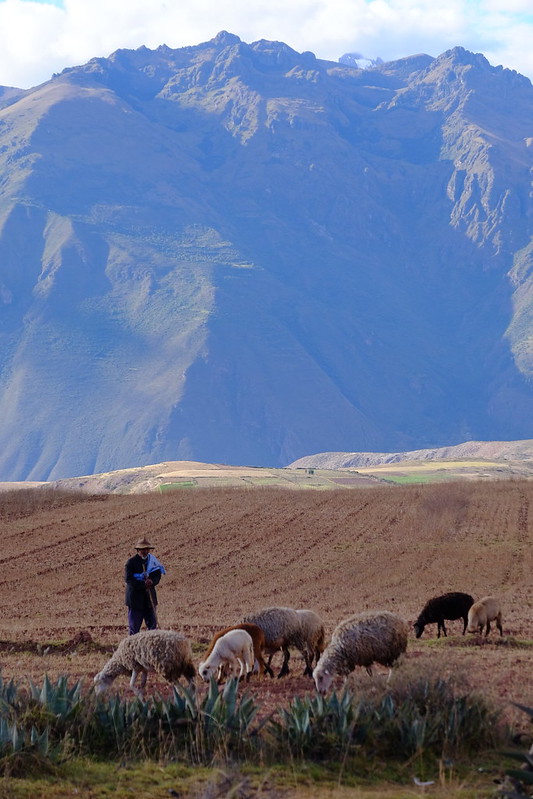 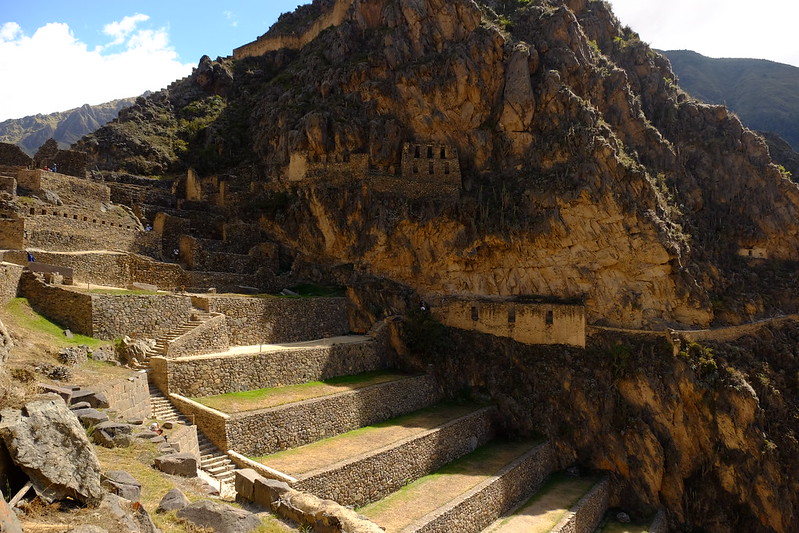 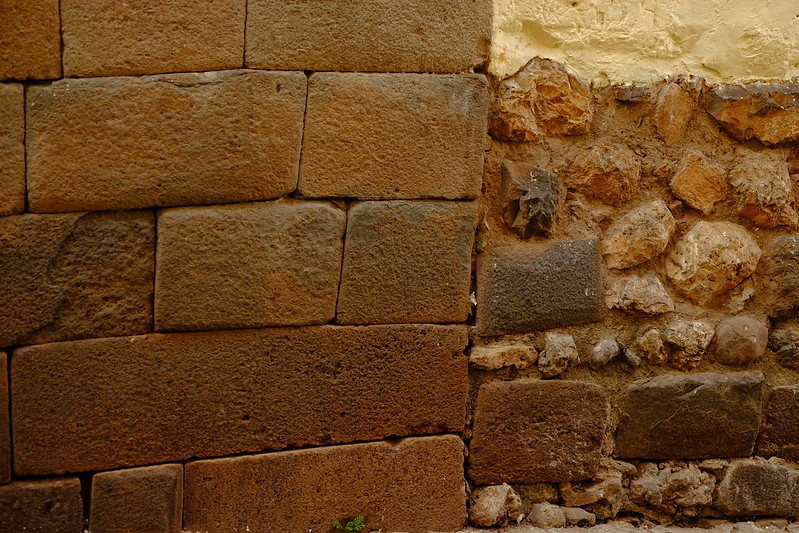 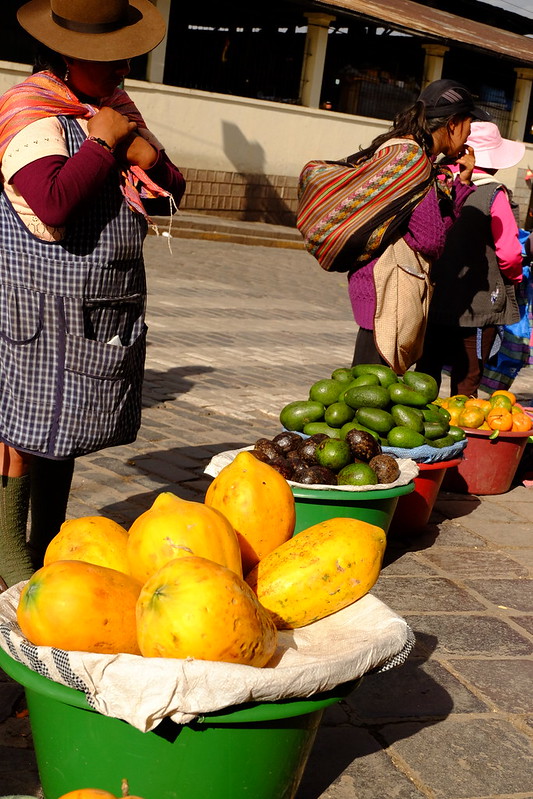 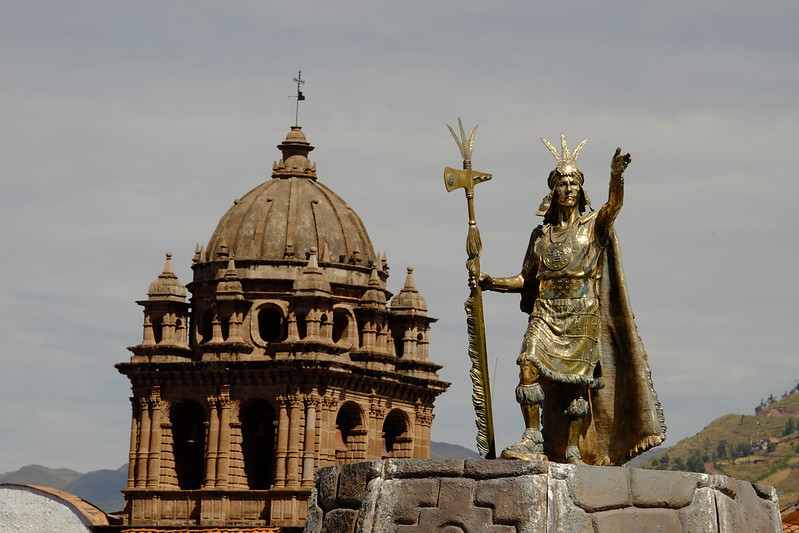 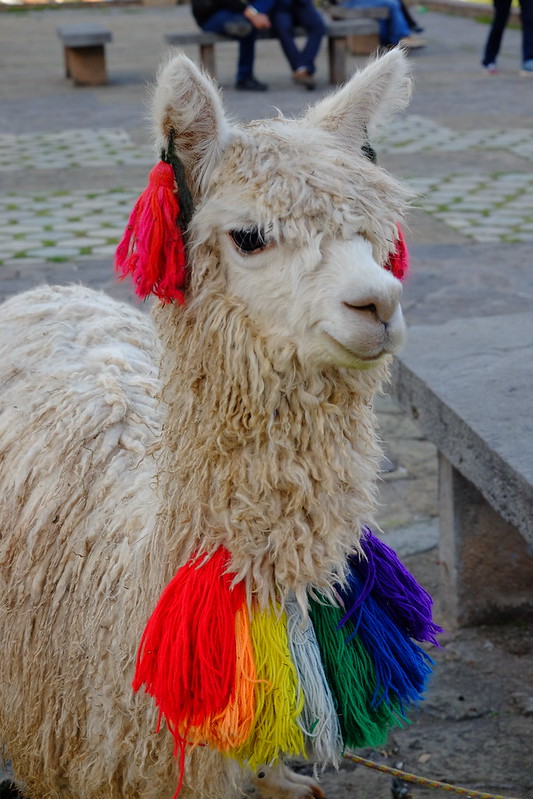 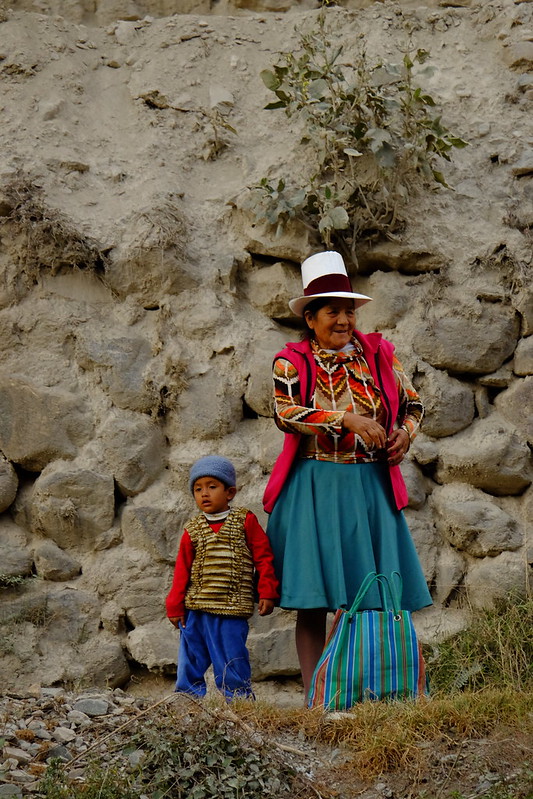 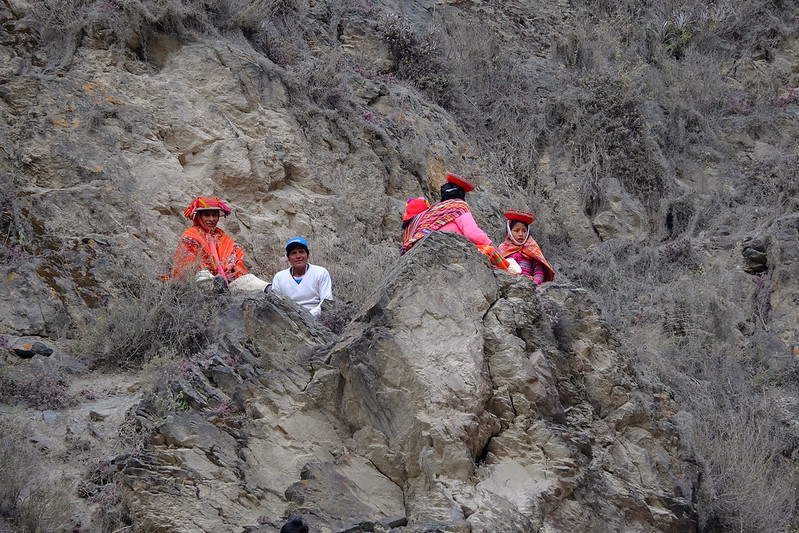 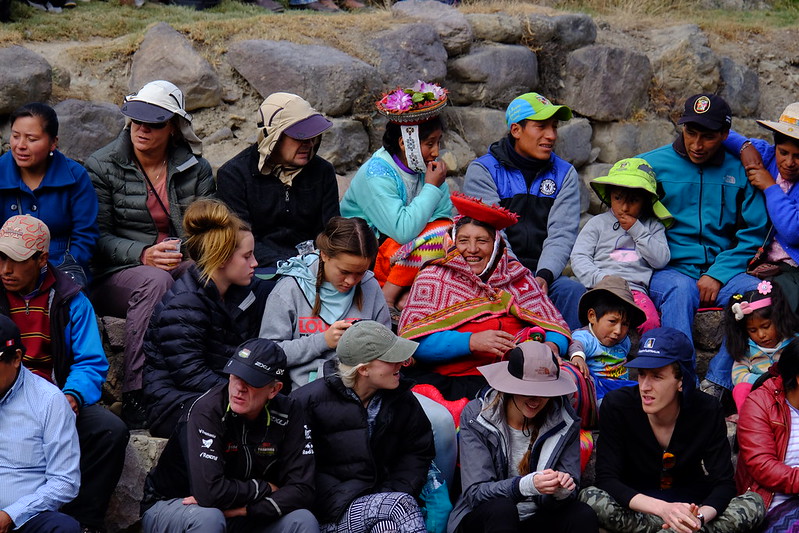 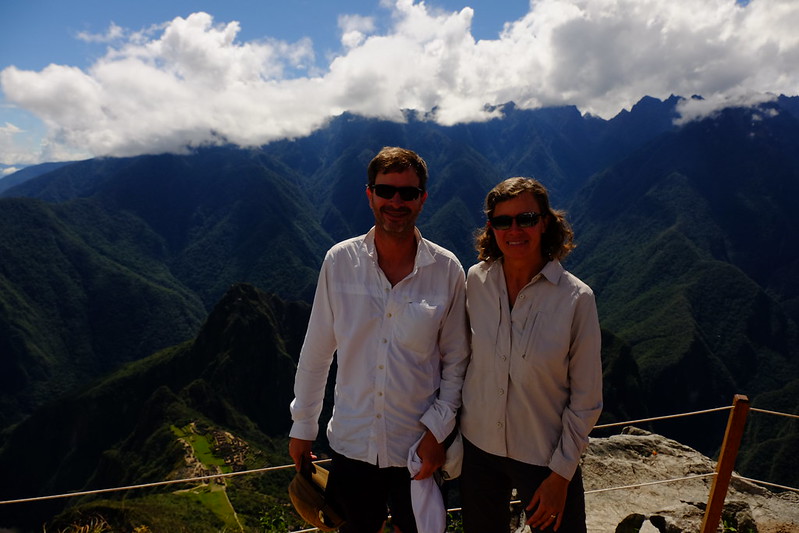 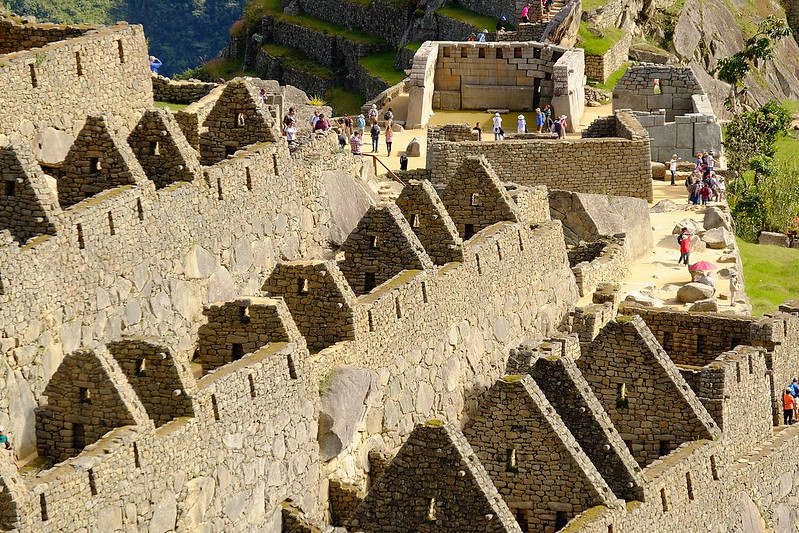 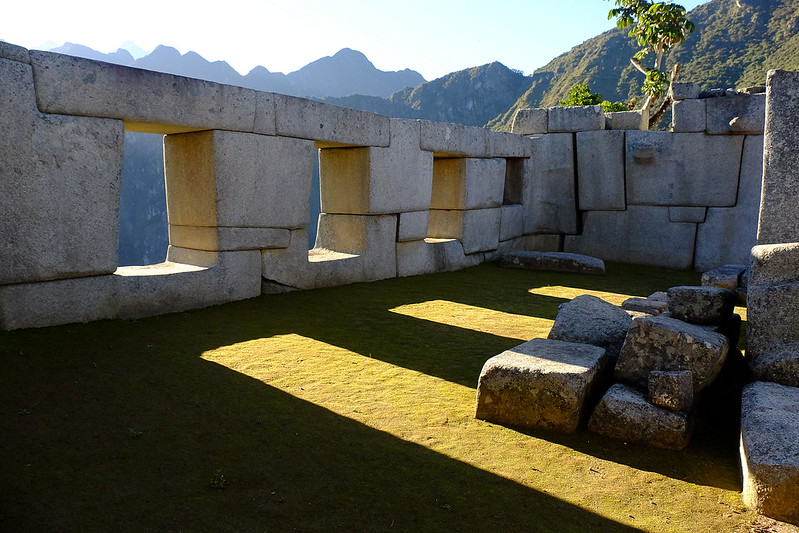 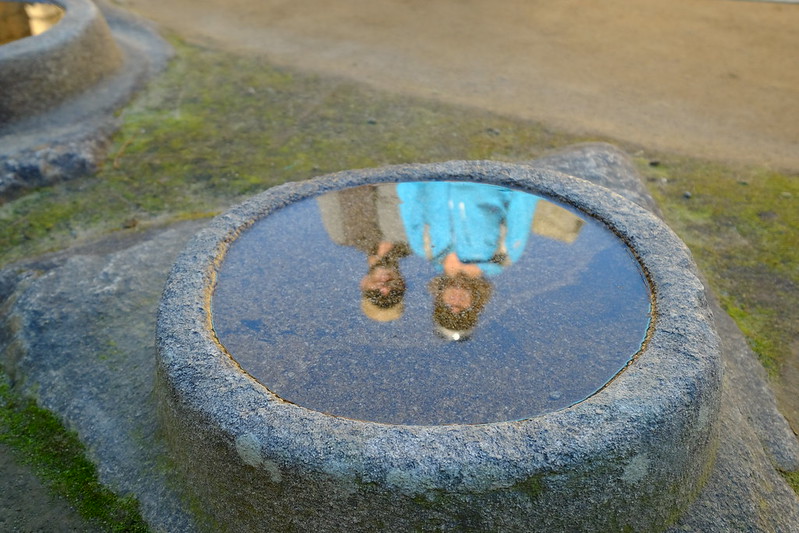 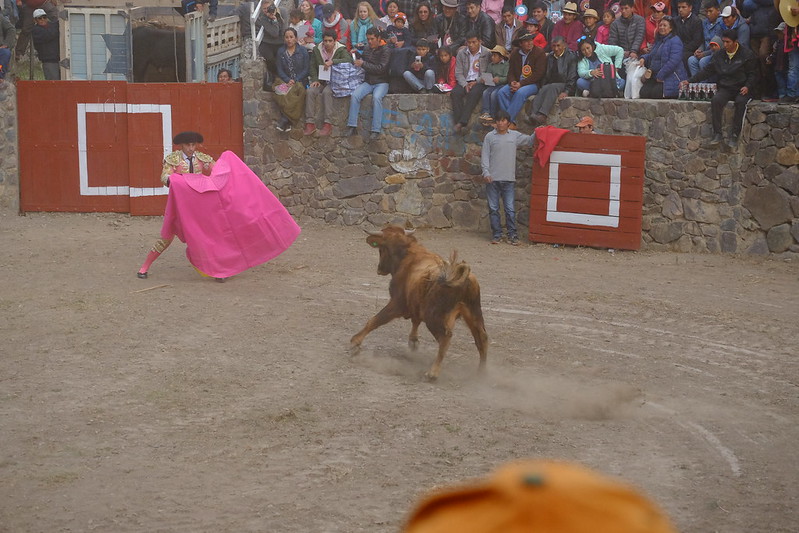 You continue to amaze me with your awesome photography and narrative of your trip!! So sorry that you, Peter, had the incident of losing your cell phone and Denise, you cracking a tooth! Stay safe! Look forward to your next update…..what an adventure you two are having!!!

Wonderful and thank you. So different from a friend who took a tour to Machu Picchu. It makes me want to dust off my backpack…..Stay safe and what’s next?

I feel a connection to Macchu Piccu so beautiful thanks for sharing. Hope you both are keeping well. Looking way too skinny for my liking 😉 Indulge a little!