After the awesome peaks of Peru, we finally bade adios to South America and headed west to nearby English-speaking, first world Australia. We decided that the only way we were going to see any material part of this vast country was to rent a car and hit the road. And so began our three-week, 4,109 kilometer road trip. Driving on the wrong side of the car, on the wrong side of the road, was itself an adventure and we found ourselves hugging the left shoulder frequently at first. The car came equipped with a GPS with a polite voice. Rather than instructing us to “turn left” as we are used to, the Australian voice asked us nicely to “please take the next left.” We could easily entitle this post “Australia, where even the GPS is friendly,” because as great as the country was, the best thing about Australia was the Australians themselves. They were outgoing, witty, and incredibly friendly. It was like you had known them all your life even though you’d only just met. And that accent certainly didn’t hurt. 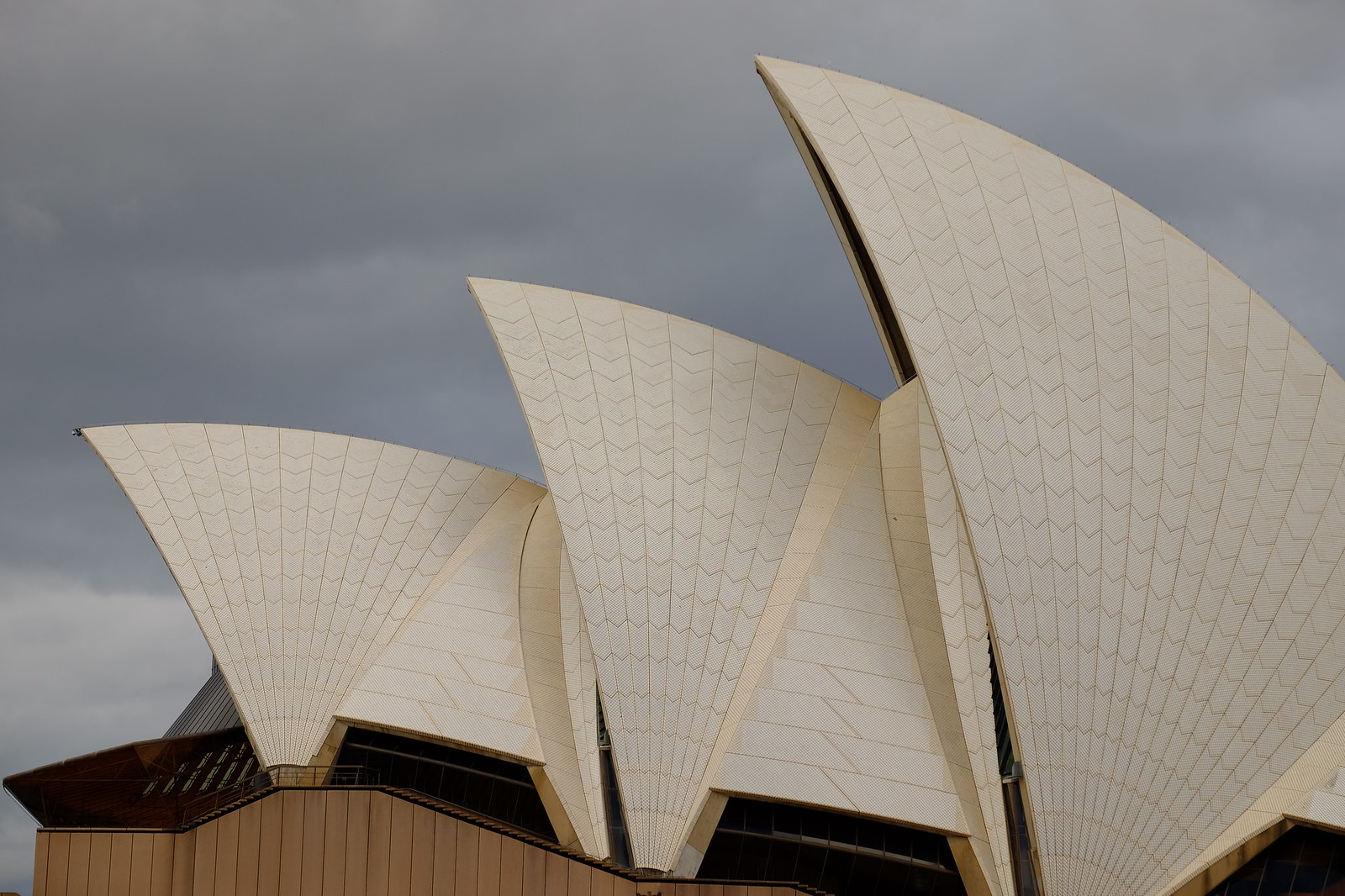 We started in Sydney, where we reveled in our native language, sunny but chilly weather, and the fantastic, Italian-style coffee that was to be found in every cafe. We visited the major sites, took a ferry ride across the harbor, marveled at the beaches located right in greater Sydney, and generally enjoyed a first world city. Also, I have to share this as I found it fascinating. I went to a doctor for a minor skin thing. The only thing resembling an American doctor visit was the wait in the waiting room. After waiting 15 minutes, the doctor herself came out to get me, we went to her office and sat down, and after introducing herself, she said, “So what I can I do for you today?” That was it. There was no nurse, no medical assistant, no blood pressure/weight/pulse/temperature, no multi-page medical history form to fill out, nothing like that. I wish it were this simple in the US!

We rented a car in Sydney and headed down to the village of Gunderoo north of Canberra, where friends we made in the Galapagos live on their sheep farm. We spent three days with these great hosts, who spoiled us with wonderful home cooking, great Australian wines and craft beer, music, wildlife spotting, and general fun. We even helped to cut up a downed tree on their property. It felt really good to do something “normal” for the first time in several months! 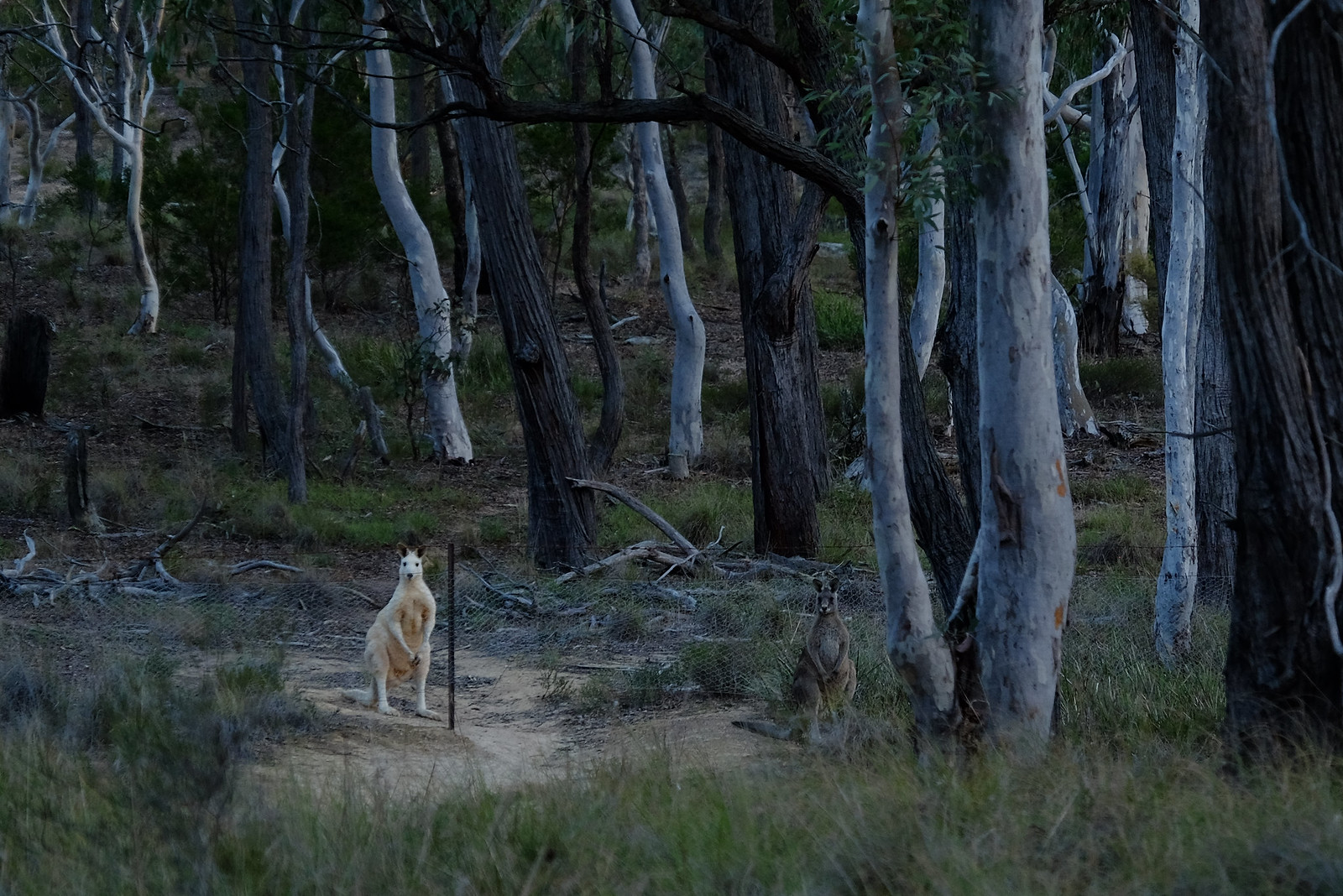 A rare albino eastern gray kangaroo (and its standard-colored offspring) one evening near Gunderoo.

Leaving Gunderoo we pointed our car north, taking the scenic inland route for a while to eventually get a glimpse of the Outback. After spending a night in cool climate wine country in a little town named Orange, we wound our way past many large sheep ranches and through many quaint country towns with wonderful names that only an Australian can say without smiling. (For a few of those names, click on the “Where we are” tab at the very top of this page and scroll down.) We ate the ubiquitous Aussie meat pies nearly every day for lunch, and saw far too many kangaroo carcasses on the side of the road. We were warned by many people along the way to not drive after dark, and roadkill was ever present. Eventually the soil turned red – mineral not blood – and we made it to Lightning Ridge, an Outback mining town. The Ridge, as the locals referred to it, was full of characters where nearly everyone dreamed of and chased after opal. Looking for color, they called it; “color” being black opal, the rarest opal and most beautiful stone we’ve ever seen. One night in town, we tried to have dinner at an Italian restaurant, but they couldn’t seat us because they said they had a really large group coming that night. So we ordered takeout, and came back later to wait on the sidelines for our food. A guy about our age was waiting behind us, and, not wanting him to think he needed to wait for a table behind us, I told him we were just waiting for “takeaway” as there was a big group there tonight. He said no worries, he was waiting too, then struck up a conversation. Turns out he was an opal miner and the big group gathered that night was for him, as his mum had passed away and they were burying her the very next day. Even with all this going on for him, with people coming up to him with hugs throughout our wait/conversation, he seemed to want to talk to us, gave us his email address and invited us into his mine to see what it’s really like if we could stay until Monday, a few days later. Although that would have been amazing, we couldn’t stay that long. This is just one example of why the Australians were our favorite part of Australia. 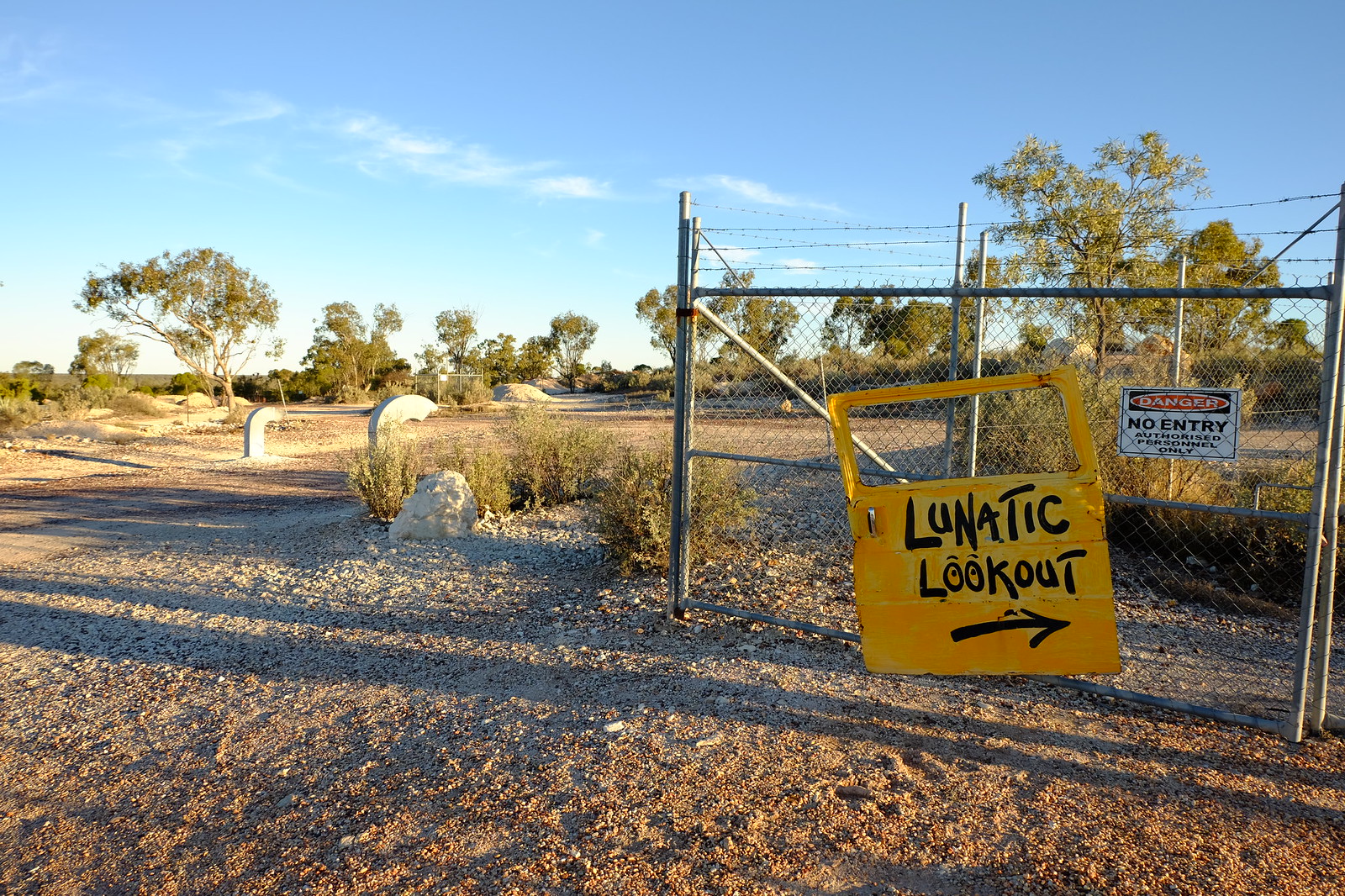 From Lightning Ridge, we drove east to Brisbane for some welcome, warm Queensland weather. Up the coast we went, taking our first surfing lesson along the way in a tiny village called Agnes Water, which is just down the road from another tiny town called 1770, so named because that is where James Cook first landed in Queensland in 1770. If standing up for a partial second on your way to falling off a surfboard counts as “getting up,” then we both got up, me barely but Peter moreso. It was fun, and we’d do it again, although Peter’s ribs hurt for several weeks afterwards.

Further north we went, seeing all kinds of strange and wonderful wildlife, albeit several in a reserve, including flying foxes, koalas and cassowaries. The reserve experience was actually really nice because we could see these fantastic creatures up close without getting, for example, eviscerated by a wild cassowary. We saw tons of other birds in the wild. Who knew cockatoos, parrots and parakeets are very common birds in Australia? I mean really, an actual parrot flying from one tree to another as though it were just another day. And no jungle anywhere in sight! Amazing. 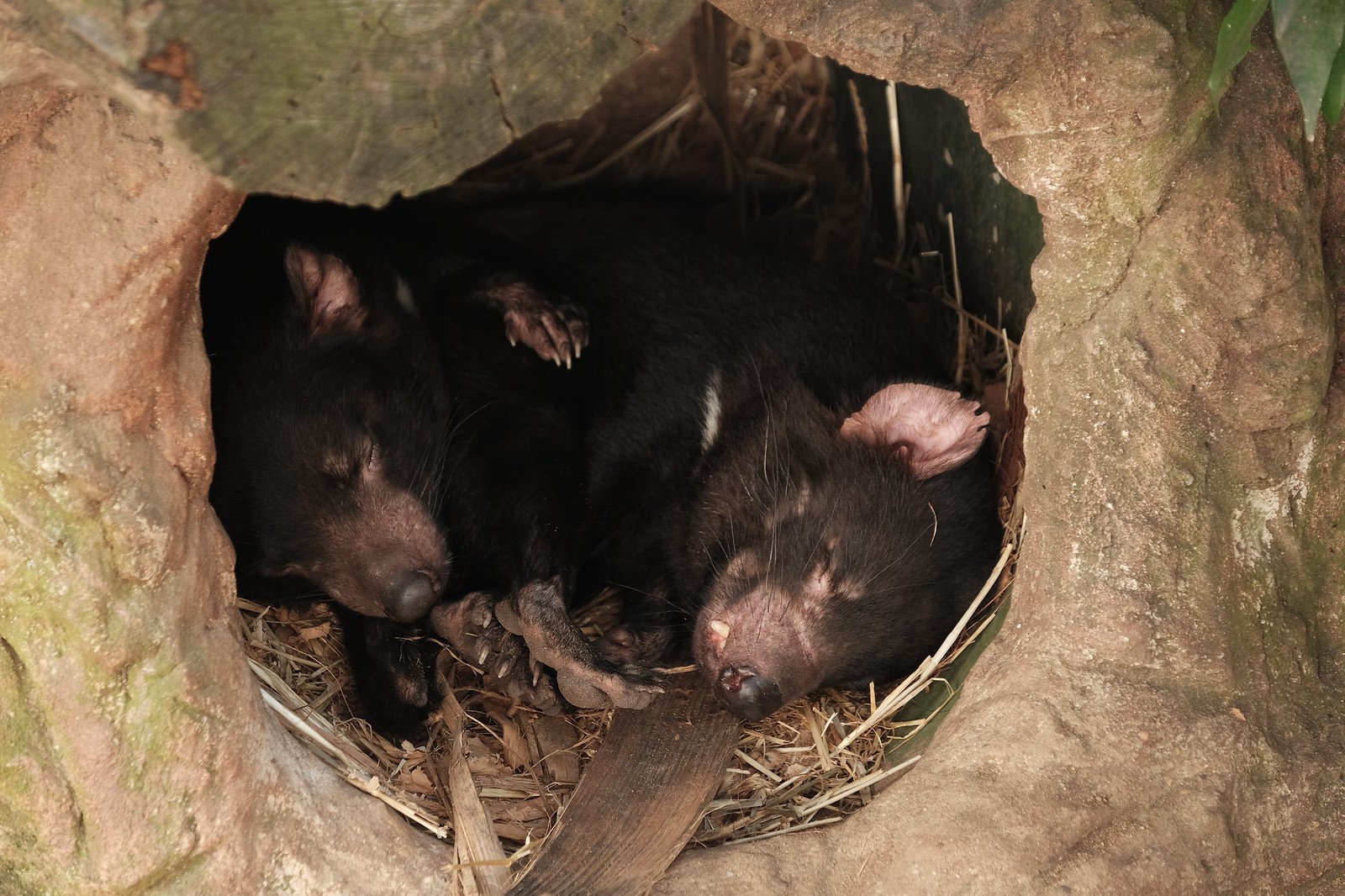 Tasmanian Devils, who are endangered in part due to a facial tumor that is contagious amongst them and fatal. 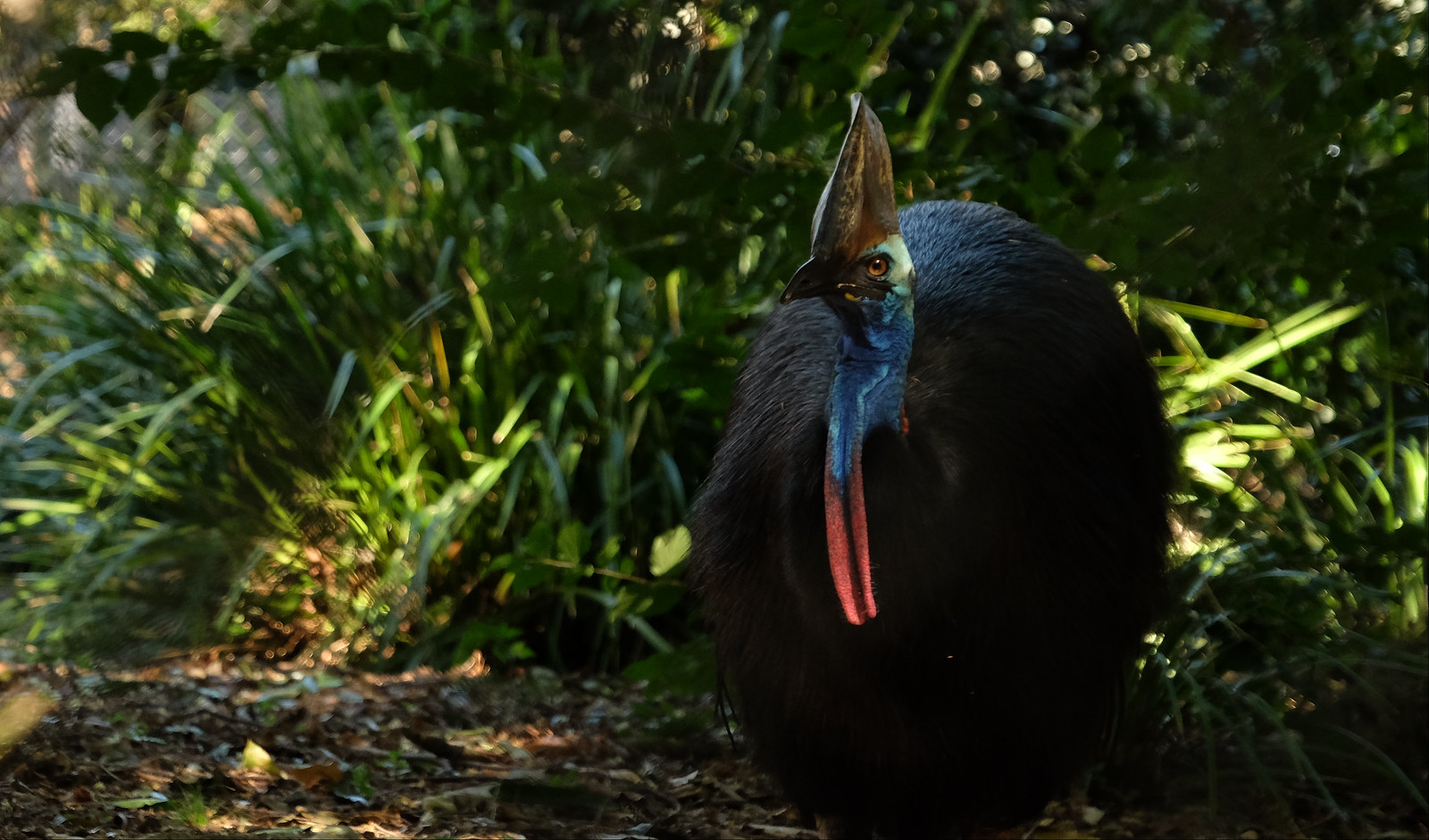 The incredible, endangered Southern Cassowary, which cannot fly but stands over five feet tall, weighs 120 pounds, can run up to 31 mph and jump up to five feet.

When we arrived in Airlee Beach, we took a snorkeling trip on a classic sailboat, the Derwent Hunter, out to the Whitsunday Islands where we didn’t have enough wind to really sail, but enjoyed it anyway. The Whitsundays have blindingly white sand beaches, protected waters where sailing is extremely popular, and some decent snorkeling. They had been hit hard by Cyclone Debbie a few months earlier, and although the damage is apparent, everything seems to be recovering nicely. 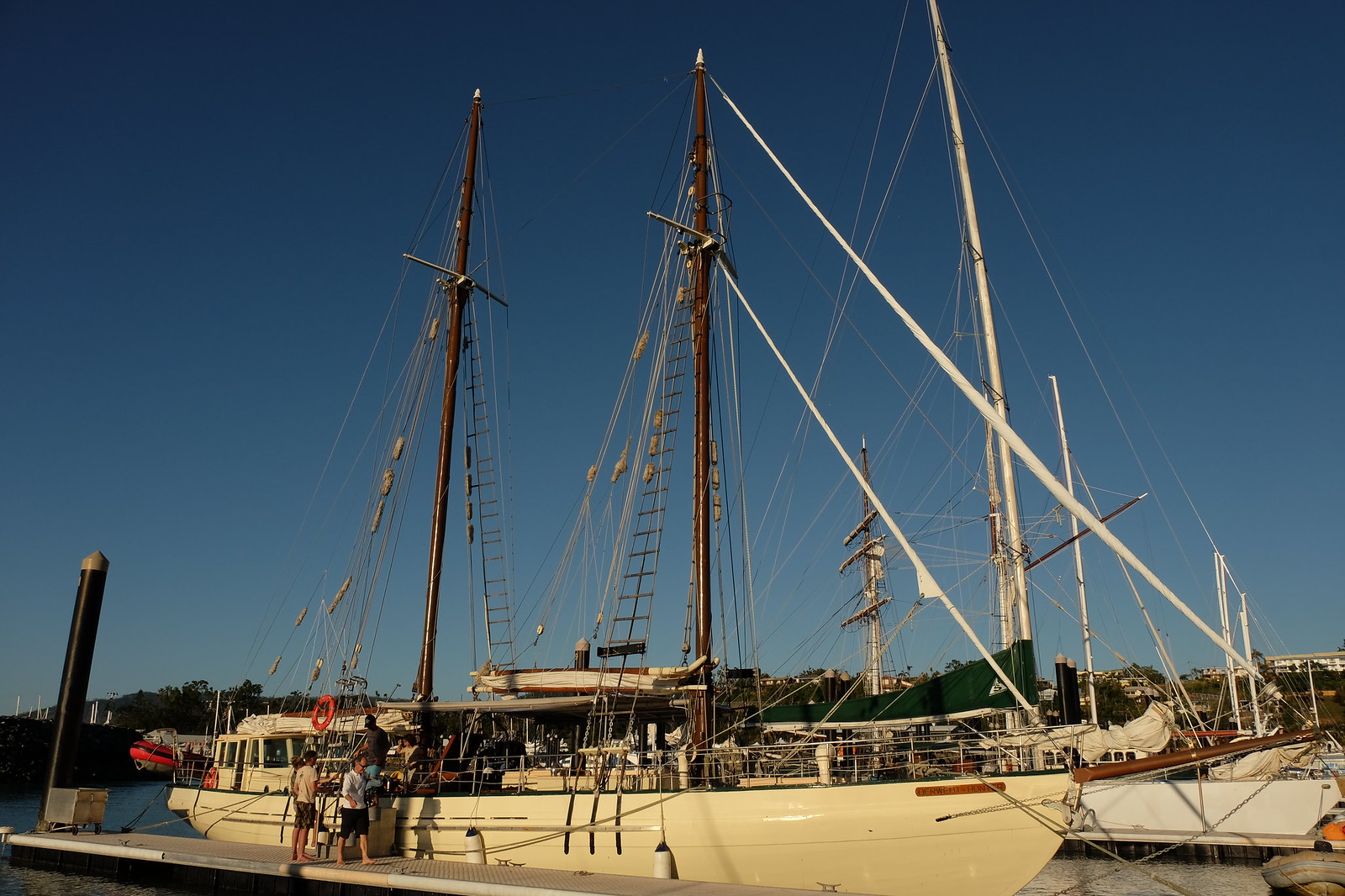 The Derwent Hunter, built in Tasmania in 1946, previously used for research and other things.

Onward to Cairns. We took a day trip out to the Great Barrier Reef and went scuba diving. The visibility wasn’t great that day, but it was still good and we got to see some types of coral we had never seen before. The Great Barrier Reef is enormous. It’s comprised of over 2,900 individual reefs and over 900 islands in an area as big as California and is not something you can truly appreciate from the water. Next time, we’d like to see it from the air.

Finally, we went to our most northern point, the Daintree Rainforest. We took a cruise up the Daintree River to look for the famed saltwater crocodiles. We saw several crocs, including cute baby saltwater crocodiles (something seems wrong with that phrase). Unfortunately we didn’t get to see the local alpha male, nicknamed Scarface, who is 50-70 years old and over 15 feet long, but you can google him. 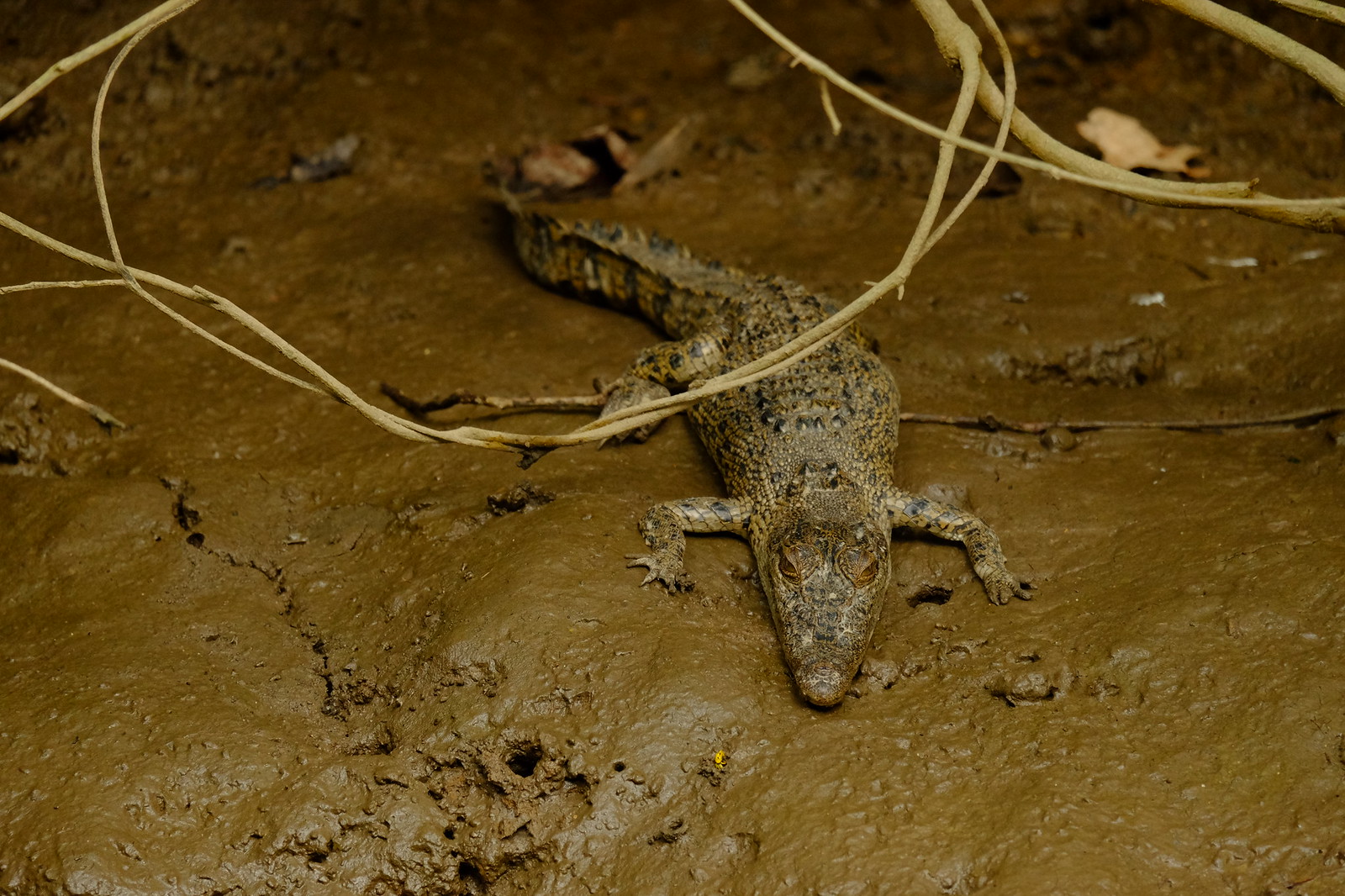 Australia is expensive. Because of that we were thankful we had our tent, which we used more in three weeks in Australia than we did in seven months in South America. Other than one cold night tenting out in the Warrumbungles National Park (smile), we stayed in “caravan parks” amongst the caravans, aka RVs and campervans. We were able to cook our own breakfast most mornings, and I have to admit I’ve even developed a bit of a taste for Vegemite, as long as it’s put on toast that has been properly buttered first, as we were instructed to do by Michelle, our Sydney Airbnb host. Peter, however, never did warm to the stuff. 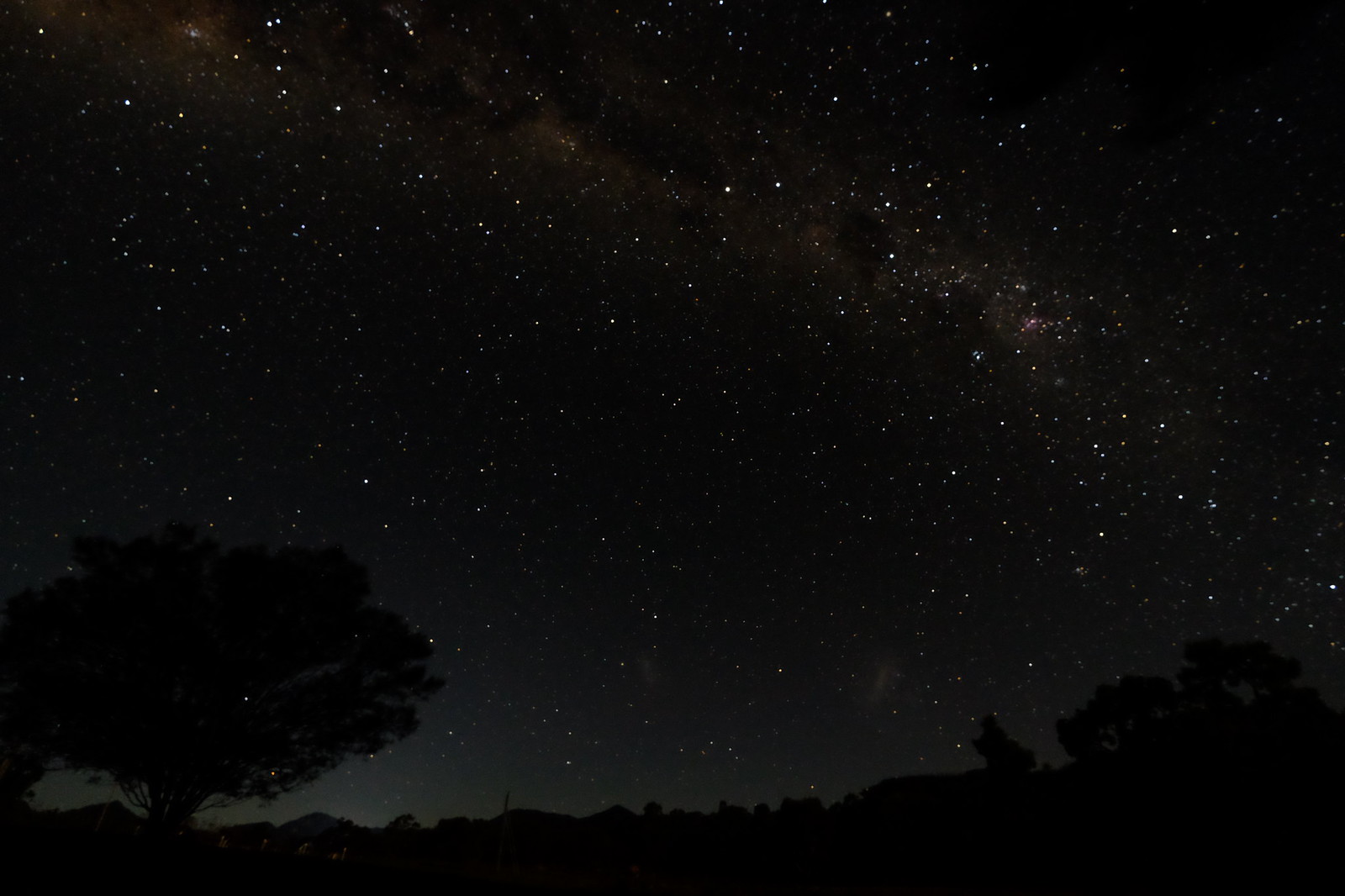 My first attempt at astrophotography one cold night in the Warrumbungles National Park. If you know the Southern Cross, you can see it clearly in the Milky Way. 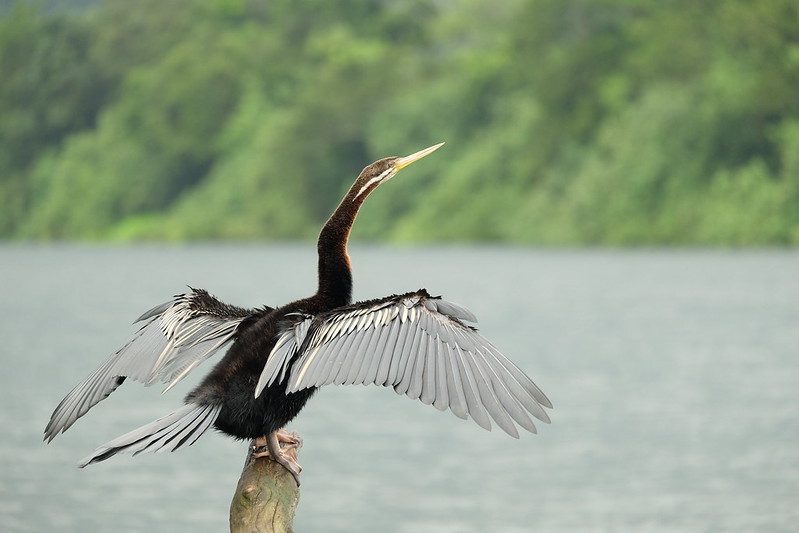 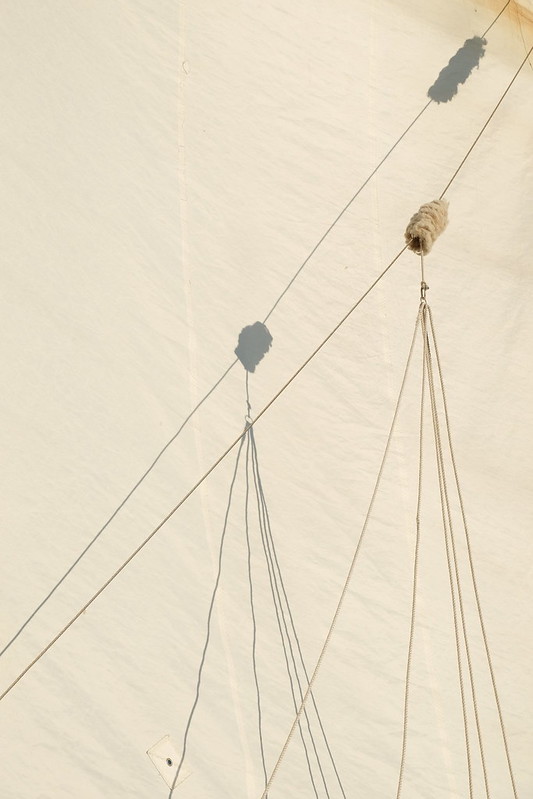 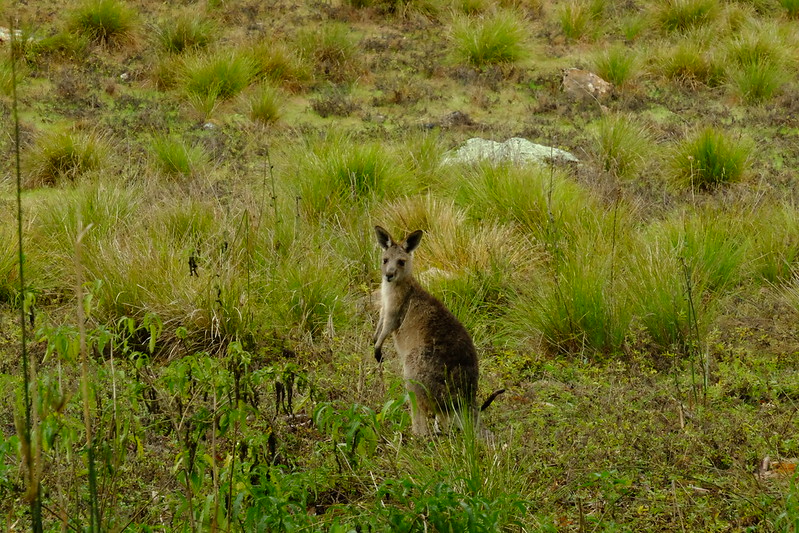 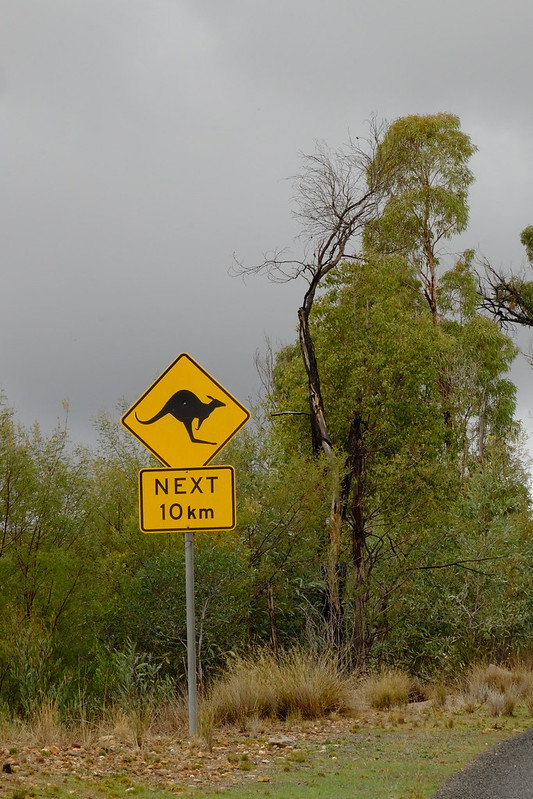 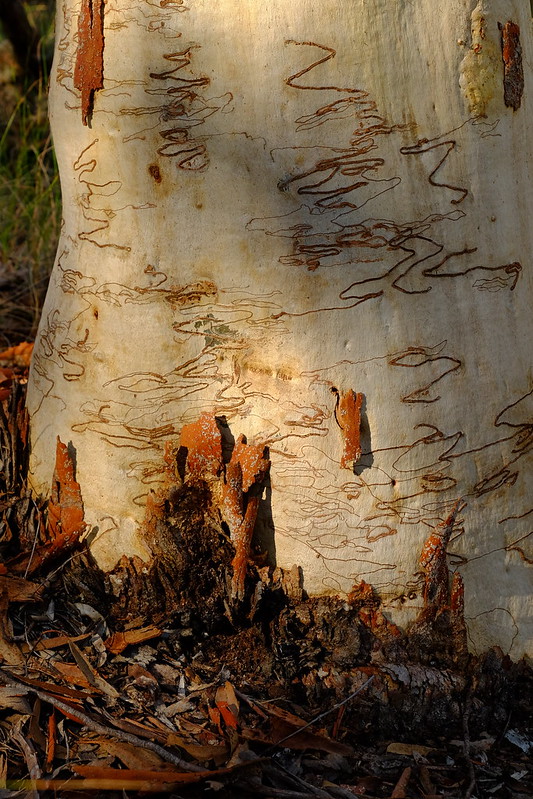 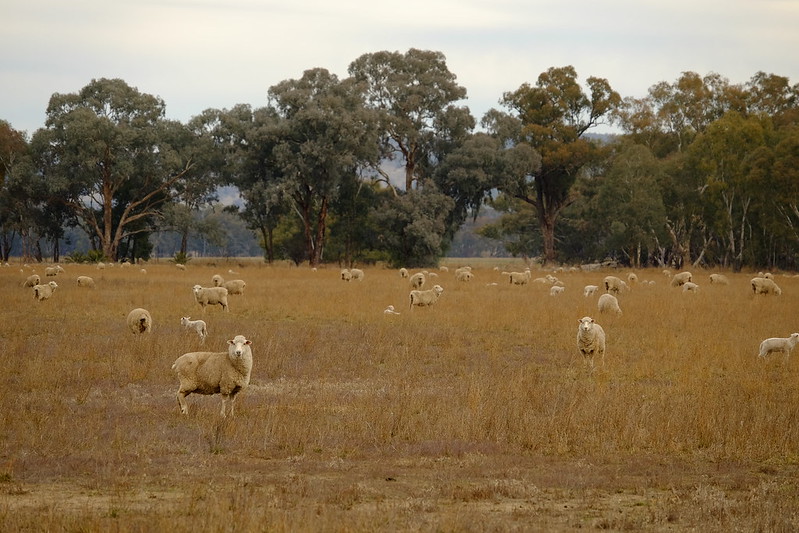 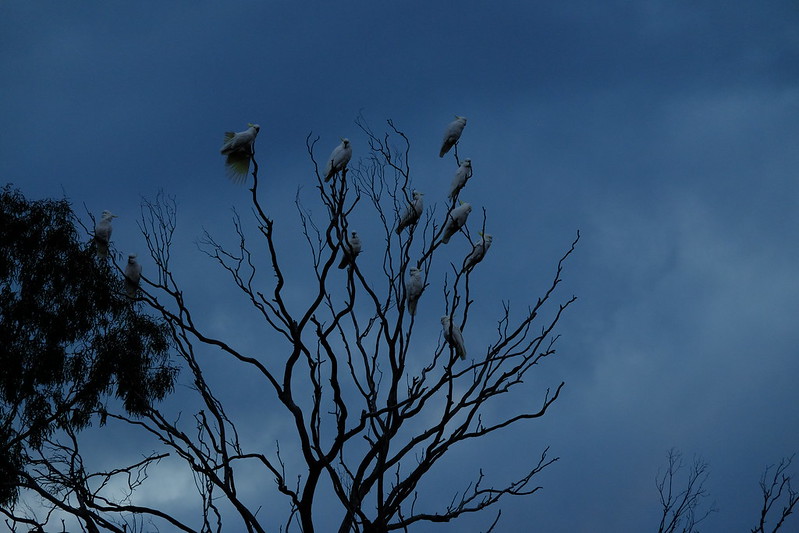 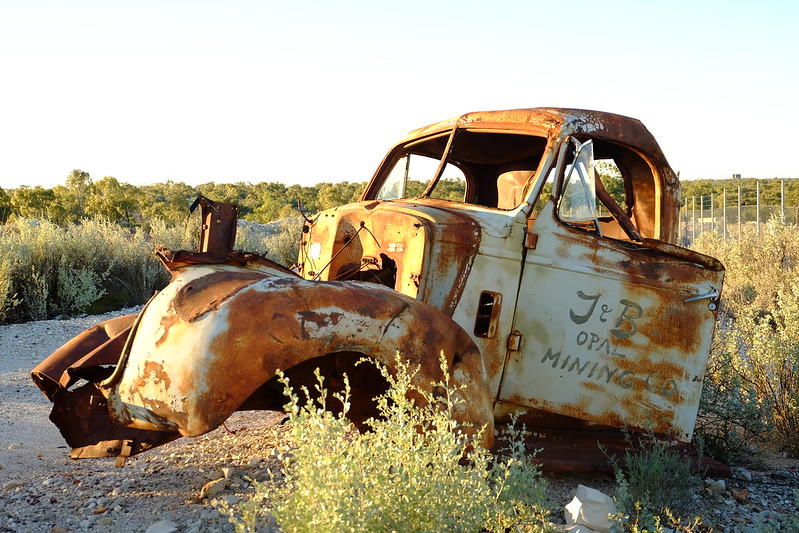 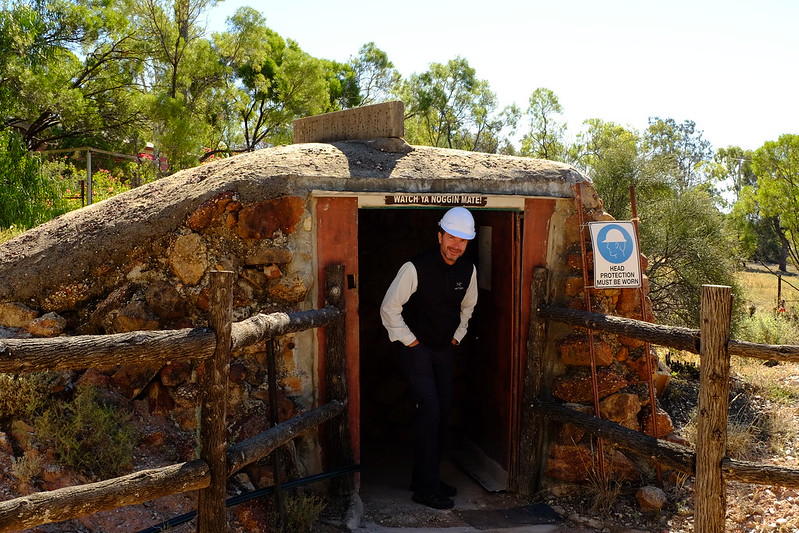 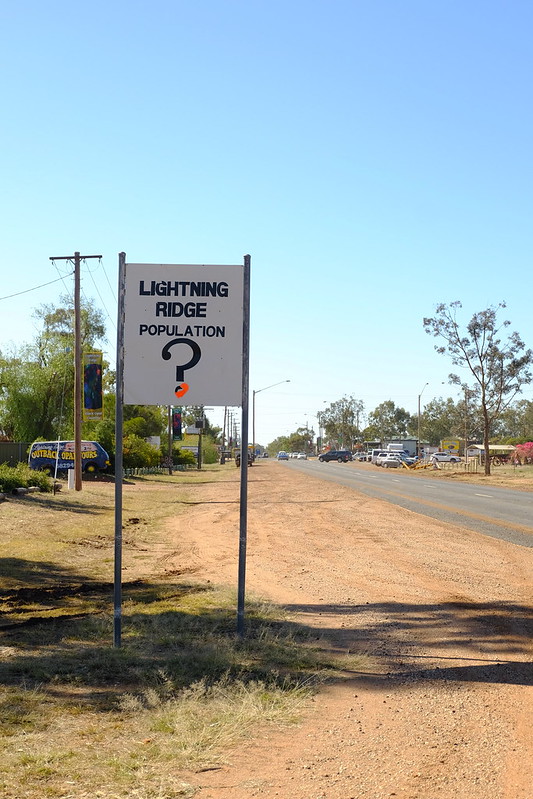 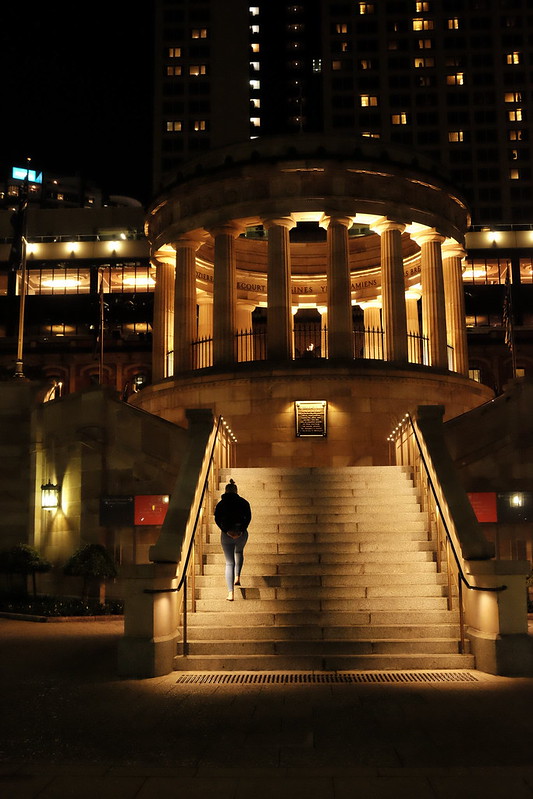 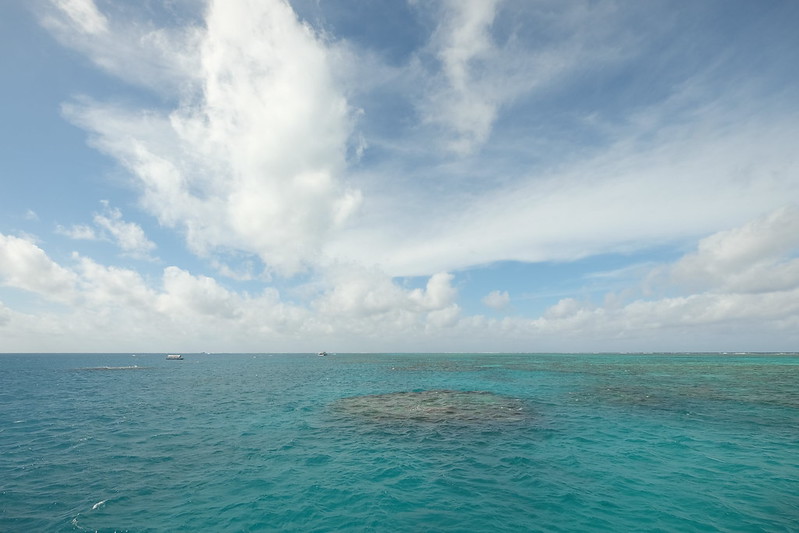 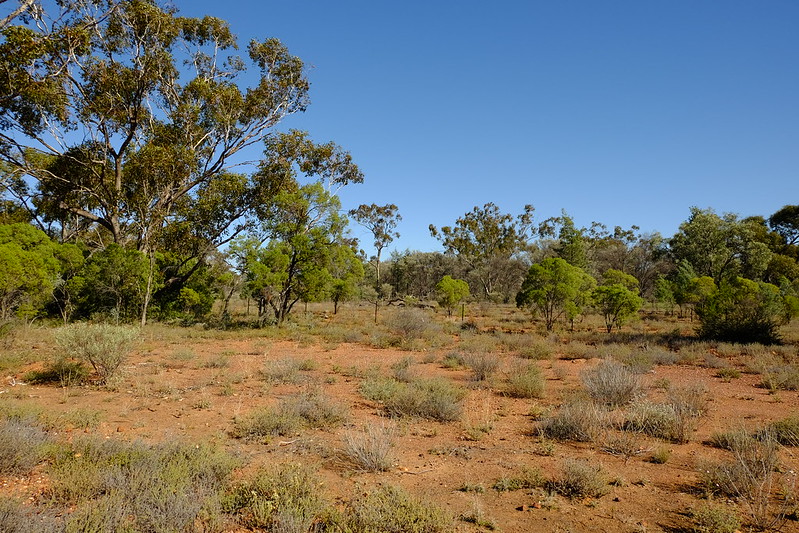 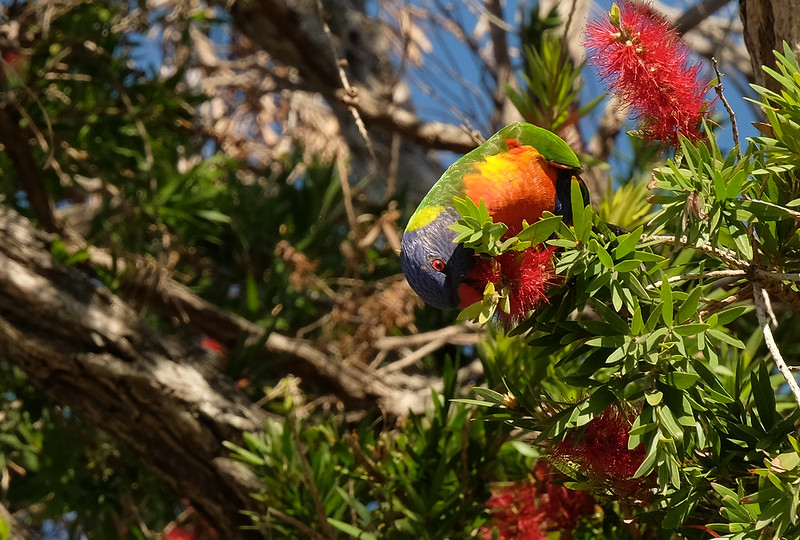 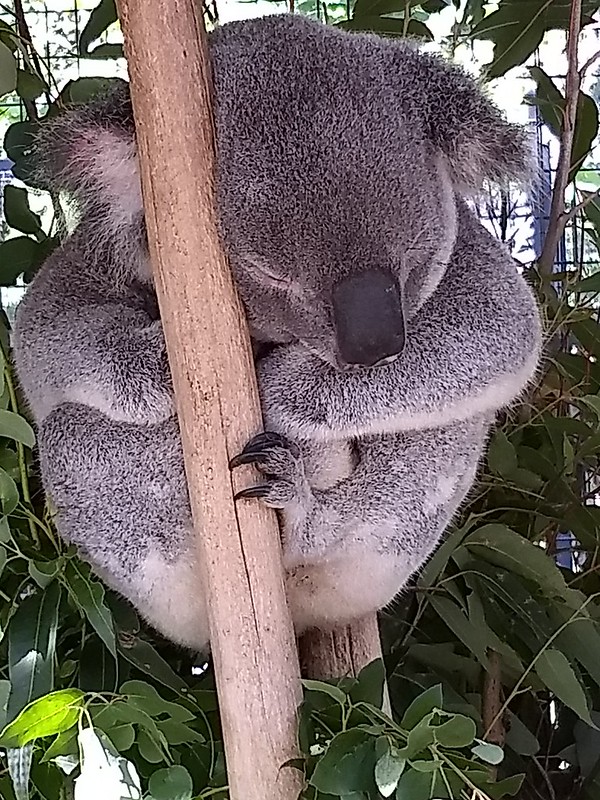 What an interesting and awesome adventure in Australia! I have always thought this would be a country I would love to visit so thank you for the narrative and pictures you provided! I felt like I was right there with you!! Continued safe travels!!

I have to admit, this is the first time I truly wish I was with you! You were right when you said I’d probably like Australia. Looks amazing! Enjoy the next leg… safe travels!

This was what I was waiting for. Australia has always been on my bucket list. The koala photo is too cute. I’ve heard they’re kind of nasty animals, but I’ve always wanted to hold one 🙂 What an amazing bird- the Cassowary. Wow! Great night picture- beautiful stars. Did you see sharks in the reef? Another place I would love to dive. Fun!!!!!

Butch and I loved the people in Australia as well. What an enormous country. We used a Cessna 180 or 182. I can’t remember which it was. That helped a lot. I’d love to make a return visit someday.