The Amazon conjured up images of swarms of malaria-carrying mosquitoes and oppressive heat but we surprisingly experienced neither. We dutifully took our malaria pills, although we don’t recall seeing a mosquito the entire time. 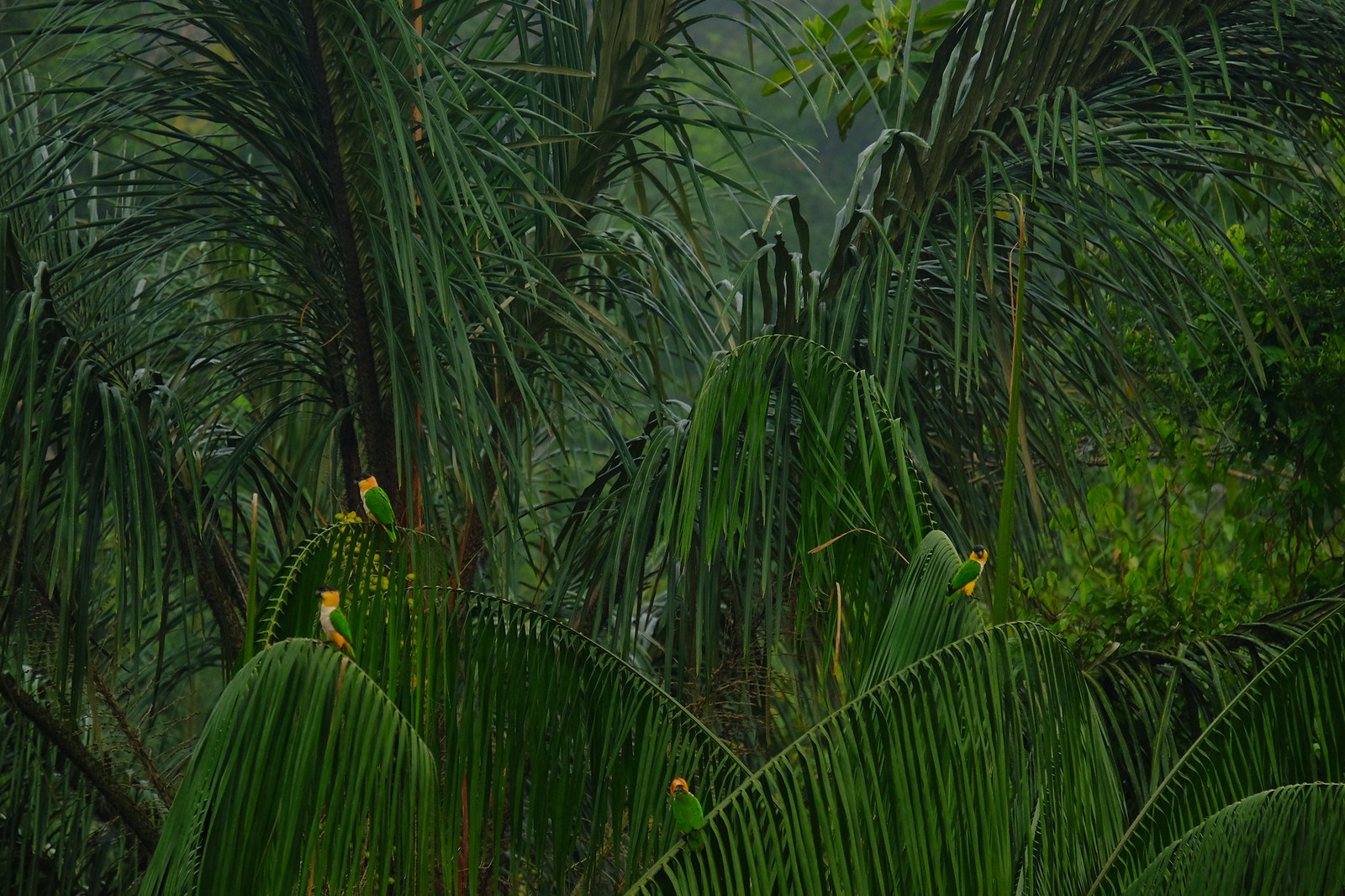 We spent four days in the Ecuadorian Amazon basin and it’s in the top two places we will return to first in South America. We spent those four days watching and being watched. We watched anacondas sleep on logs, two- and three-toed sloths sleep in trees, pink dolphins swim in the river, toucans and macaws fly overhead, five kinds of monkeys play in the trees, caimans lurk just under the waterline watching us warily, and a tarantula as it watched us from above as we ate each meal. 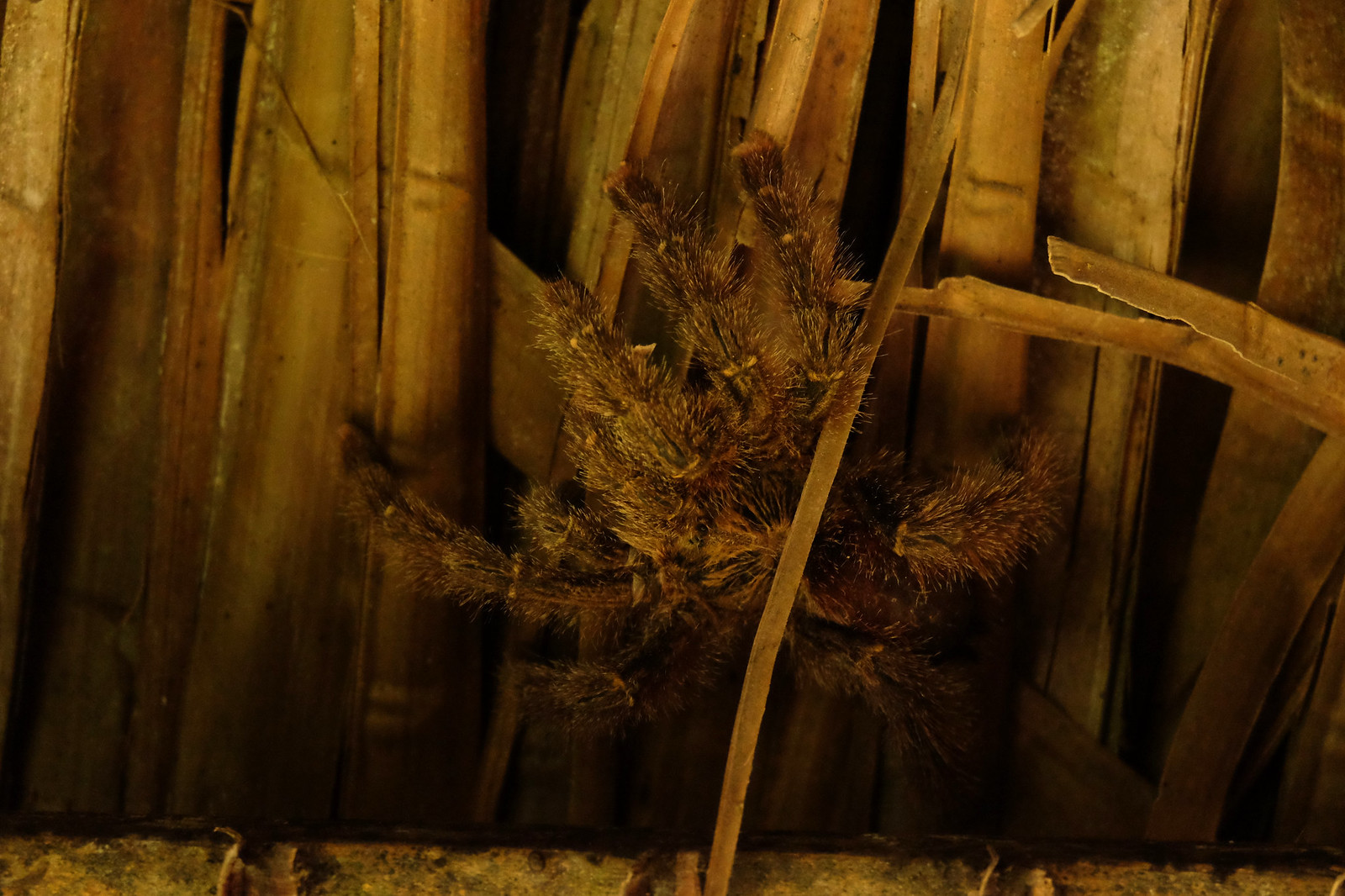 We stayed in the Guacamayo Ecolodge in the Cuyabeno Wildlife Reserve. The rustic lodge served up good food, and the only critter we found in our room was a large brown frog who looked very much at home on our wall. Much better than the girl who found some kind of snake in her room one night… 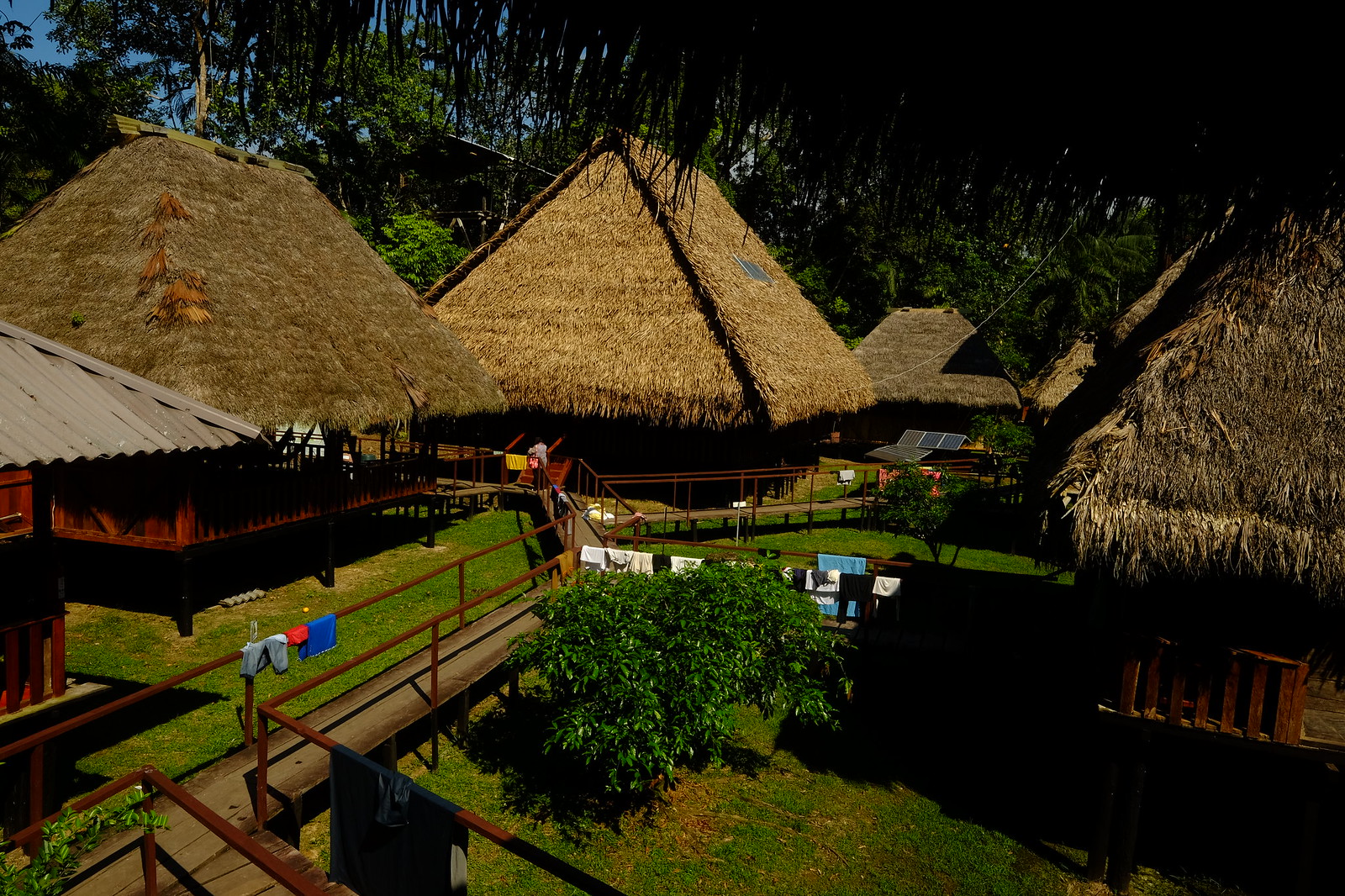 Generally, we went on some kind of excursion twice a day, normally a boat ride but also a day walk and night walk through the jungle (for the benefit of my mycology friends, I saw my first cordyceps, along with a few other fungi). We even went on our own caiman hunt around the lodge one night and were rewarded with some big spiders and a baby caiman. Caimans are in the crocodile family and several species live in the Amazon.

One day we visited an indigenous village, where we got to see and assist with the process of making yucca bread, from digging up the yucca root to eating the final product. Yucca bread consists of nothing but yucca, and the process was really interesting as it had to be grated, then the liquid removed, then cooked on a hot plate. It didn’t have a lot of taste, but when served with jam, it was pretty good. 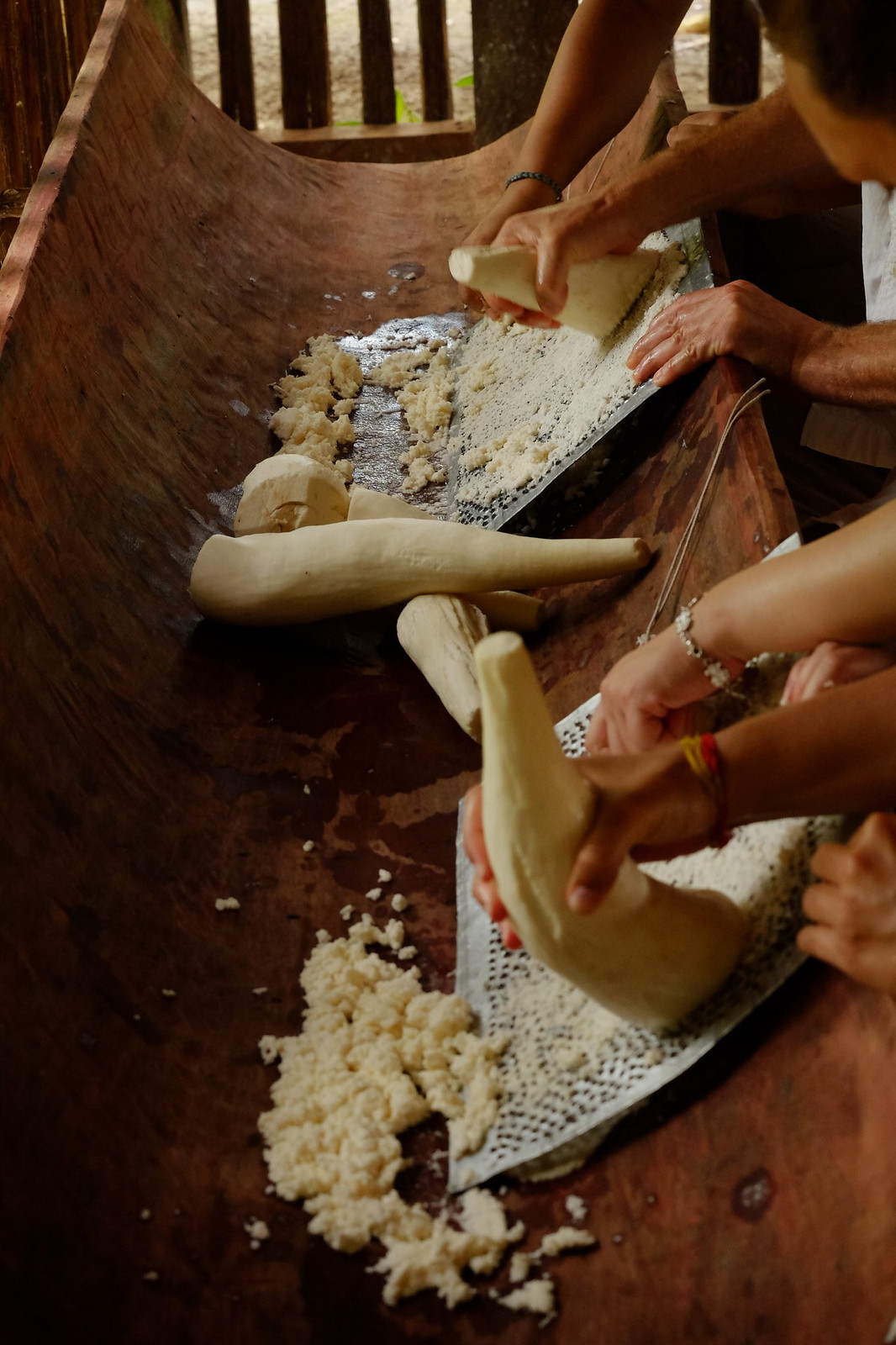 Grating the yucca root into a hollowed out tree 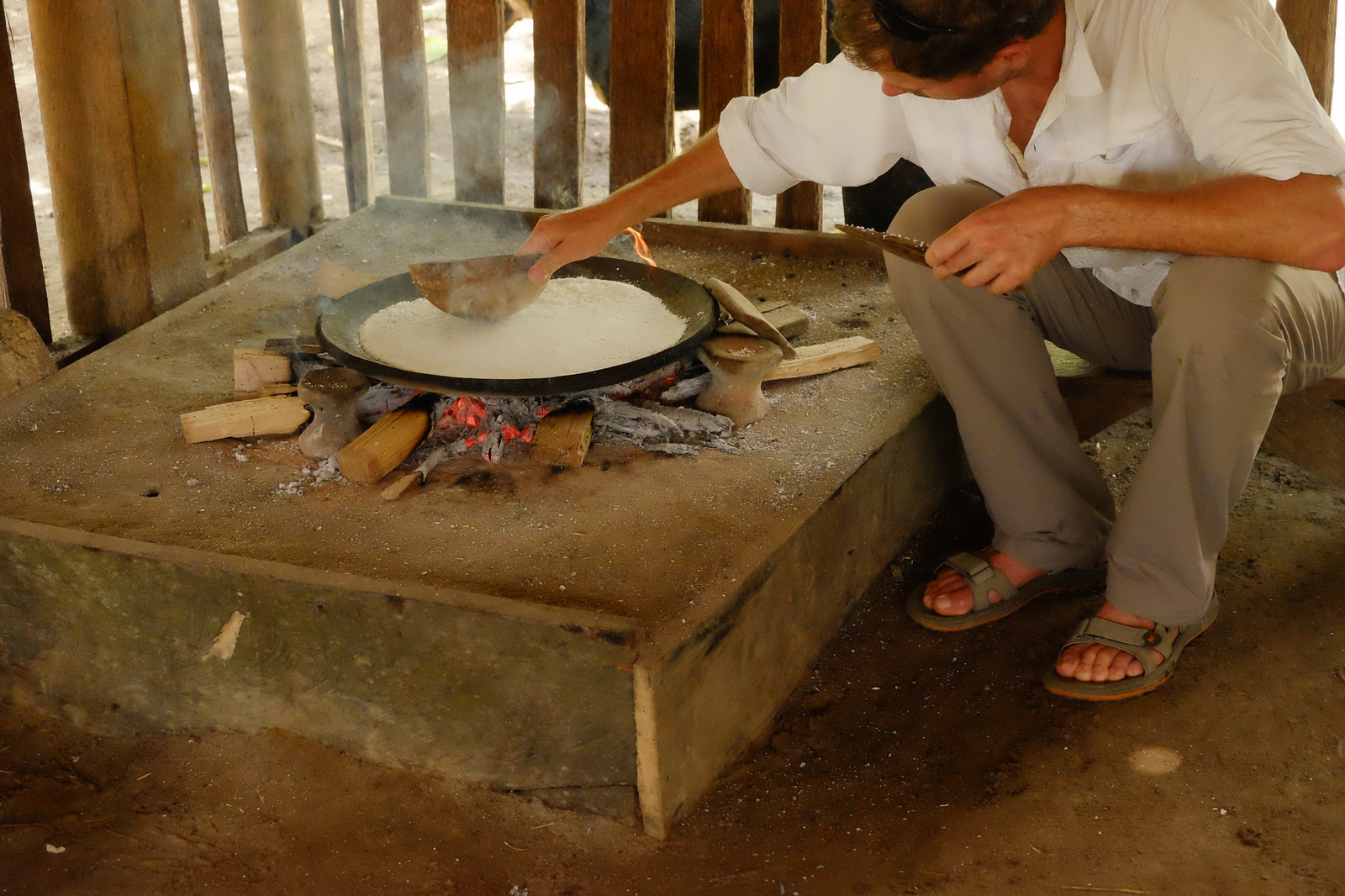 It got a little real one night, as they say. We went on an evening boat ride, which started off tamely enough with swimming in a nearby lake at sunset, piranhas be damned. Once nightfall came, it was time to go searching for snakes and caimans. With Peter and I in the front seats of our 20’ long, narrow, dugout-style fiberglass boat, we were heading back toward the lodge when our guide spotted some kind of snake in the trees. Rather than pulling alongside the shore to observe the snake as we all expected, because that is how we had been observing wildlife the past few days, the boat driver drove the boat at ramming speed straight into the shoreline, plowing through about ten feet of brush along the shore before we came to a very abrupt stop. This placed Peter and I directly under an Amazonian boa constrictor, which was illuminated — and which was the only thing in the area illuminated — by the guide’s spotlight about 15 feet over our heads. The people in the back of the boat, including the driver, couldn’t even see the snake because they were stuck in the brush, so the driver attempted to get us closer to the snake. At this point, Lisanne, a Dutch friend in our group who was sitting directly behind us, yelled out the very reasonable but unanswered question, “DO THEY LIVE IN GROUPS?!?” Which sent both Lisanne and me into fits of laughter. At this last straw, however, Peter had had it and grabbed the paddle lying in the front of the boat and pushed the boat backwards, never taking his eye off the now-wiggling snake, which he was deathly afraid was about to drop into the boat directly onto his lap. In all fairness to Peter, had the snake dropped, it really could have been in our laps. As for me, I was laughing so hard I was nearly crying at the comedy of it all. We escaped unscathed and when we need a good laugh these days, we just yell out in a panicked voice, “DO THEY LIVE IN GROUPS??” 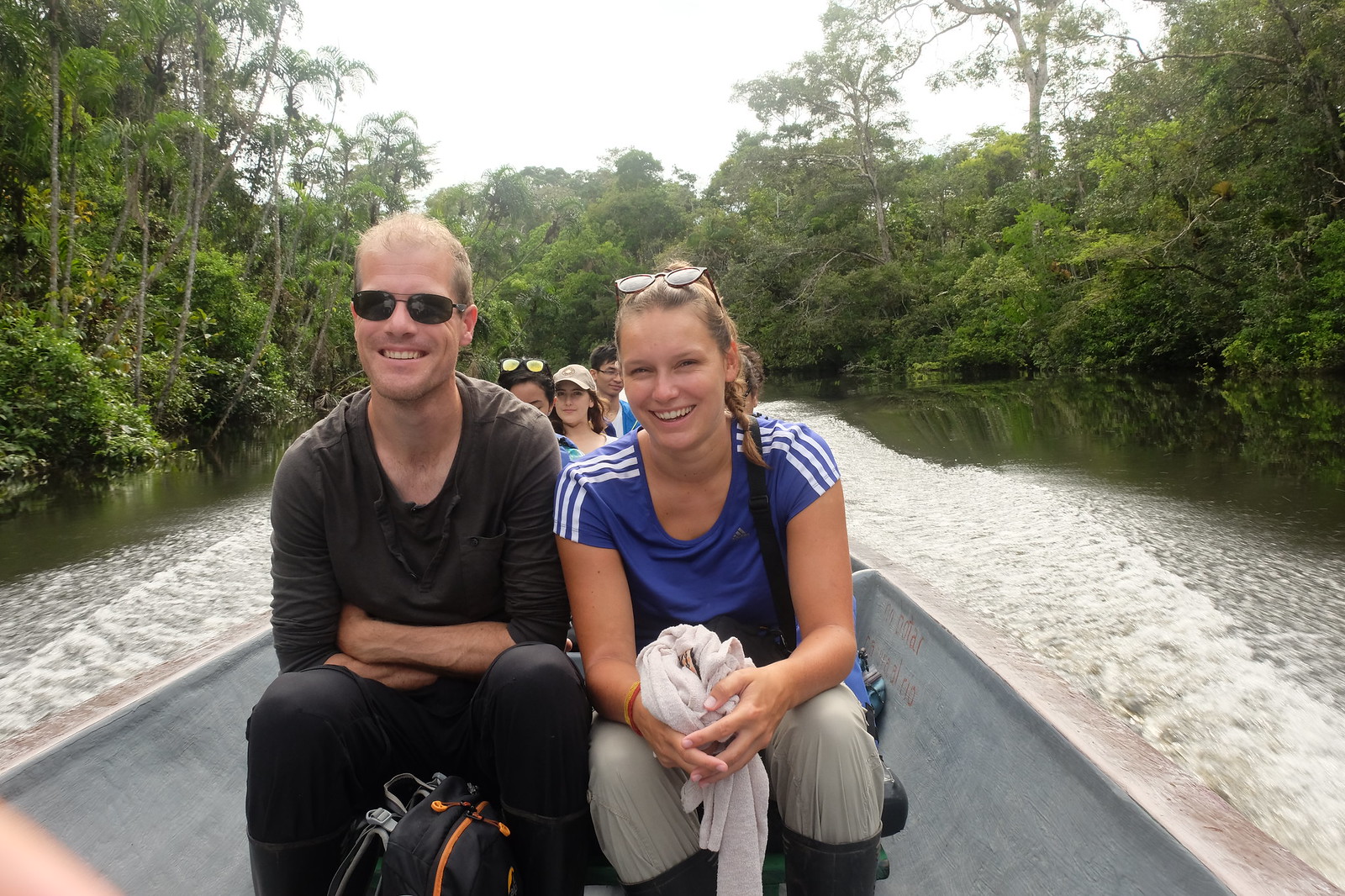 Our Dutch friends — this gives you an idea of how narrow the boat was.

For a few more photos, click through the below: 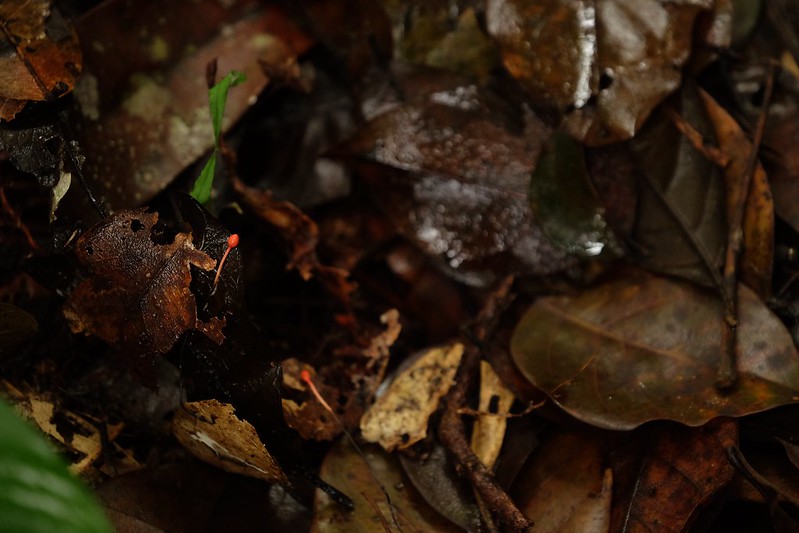 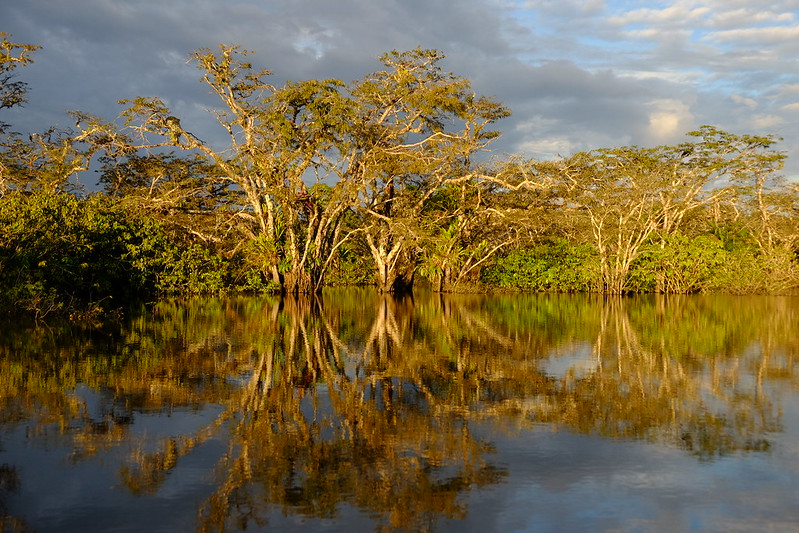 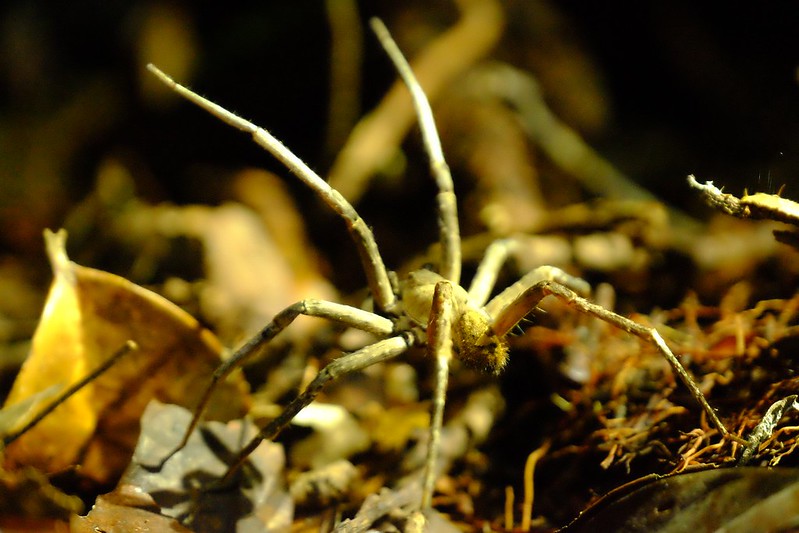 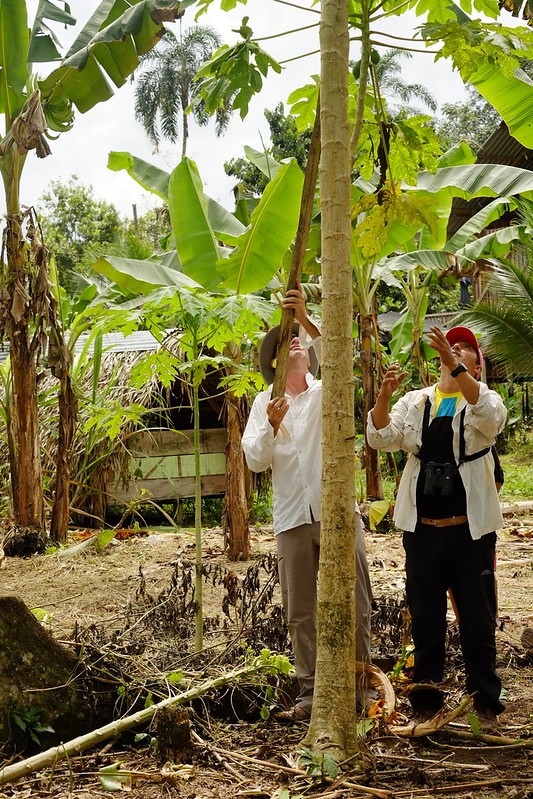 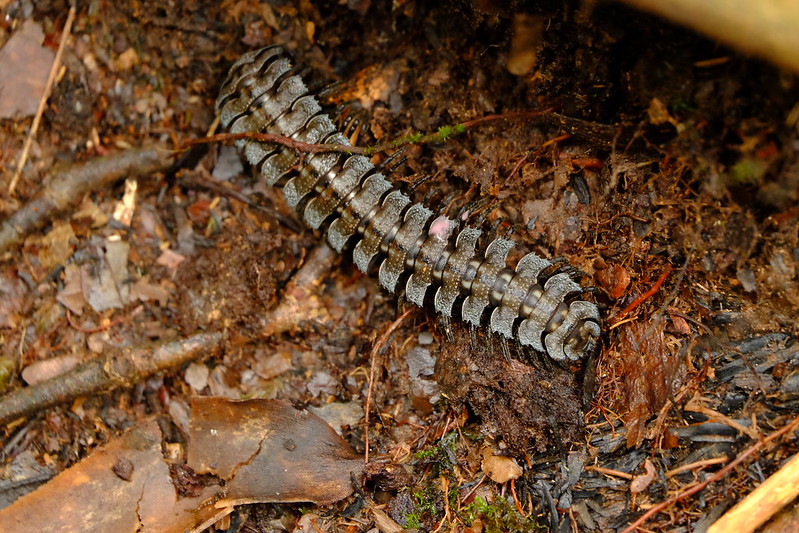 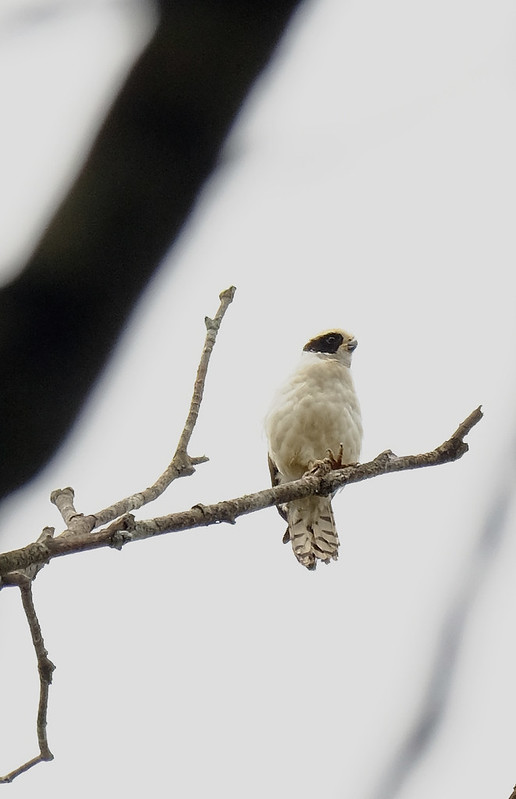 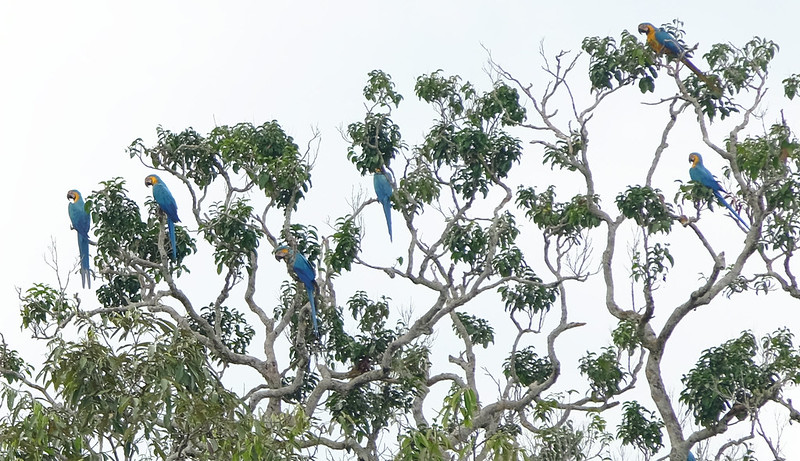 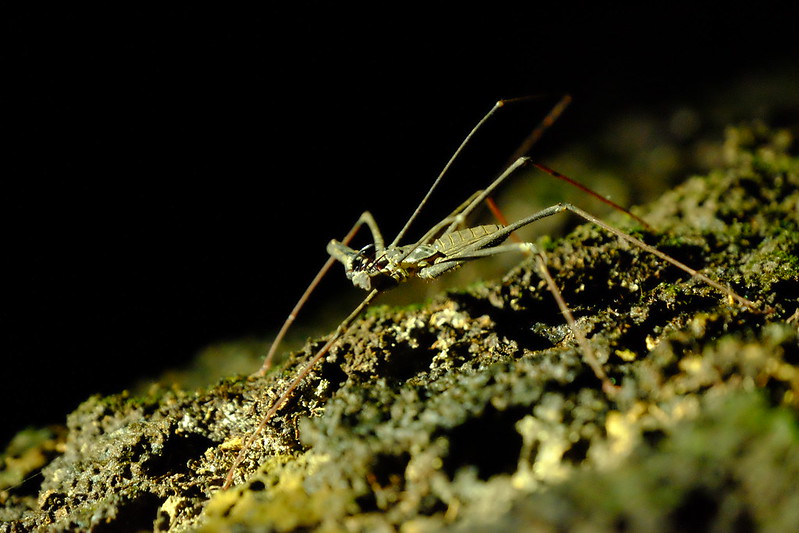 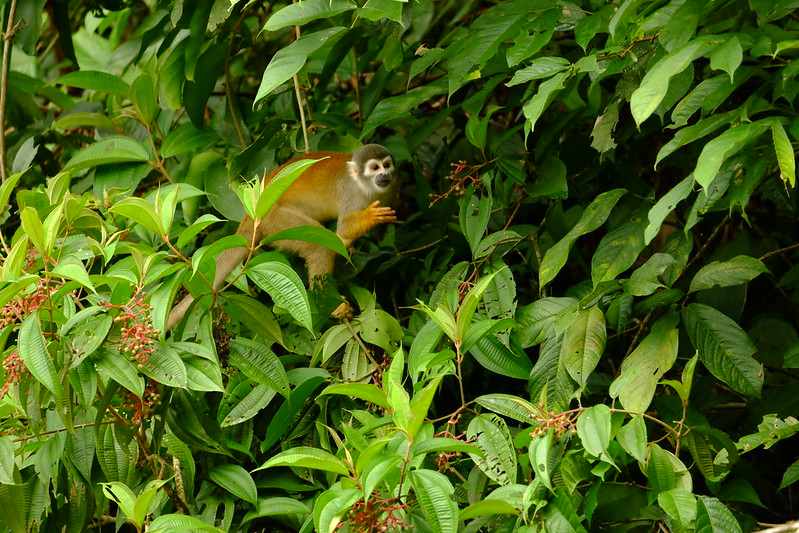 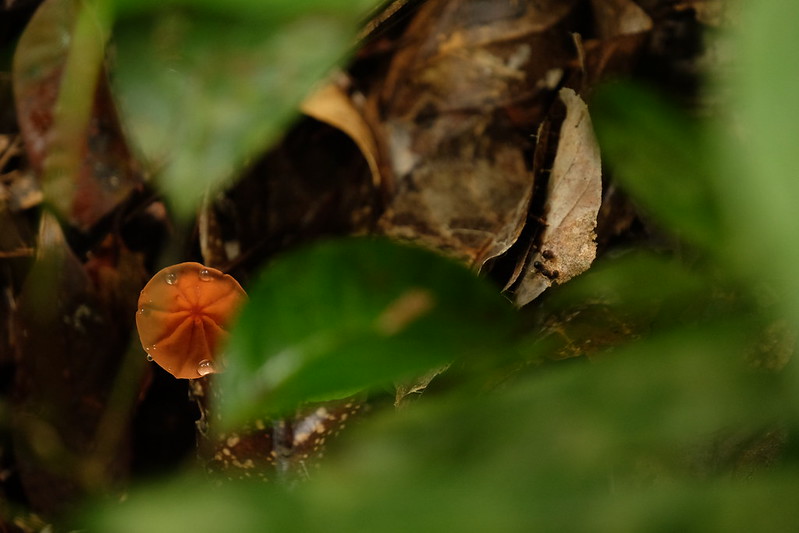 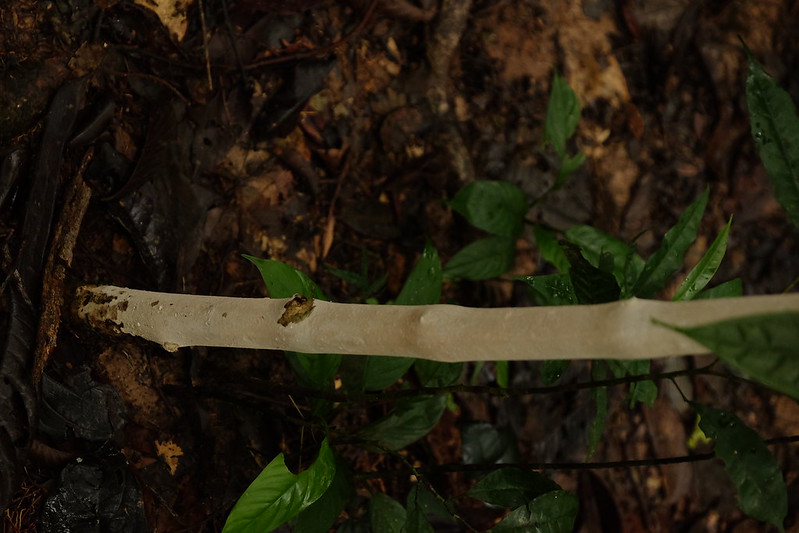 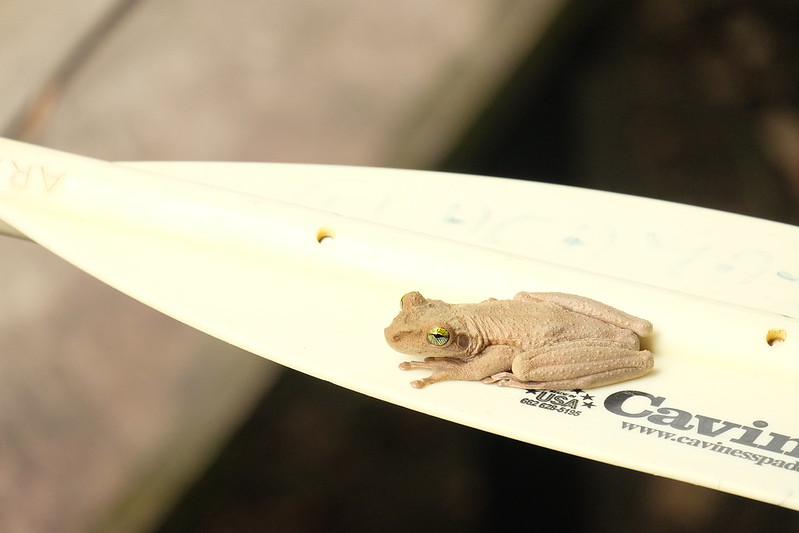 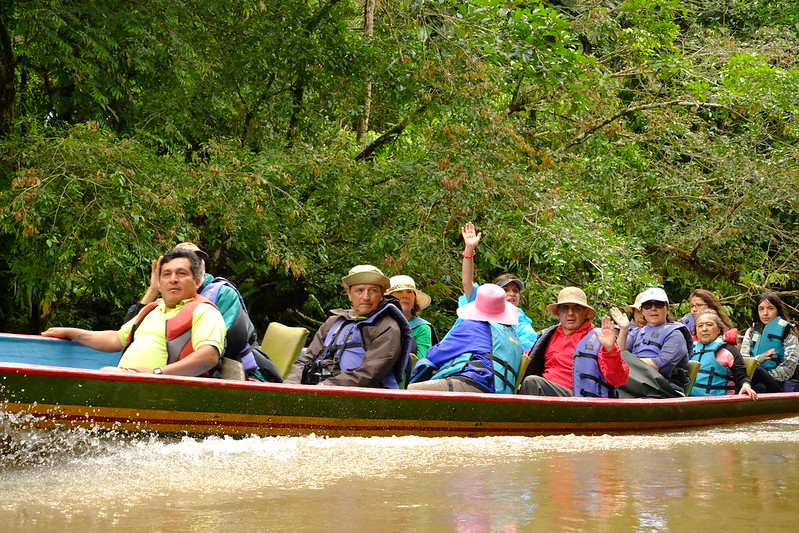 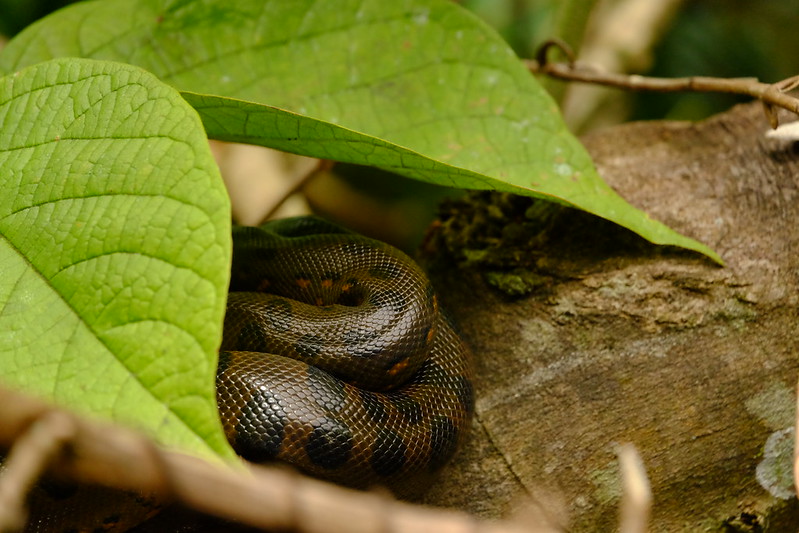 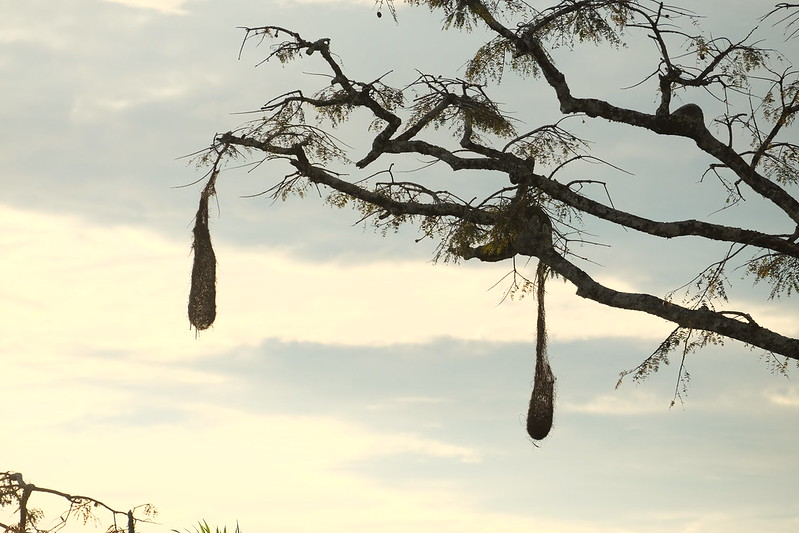 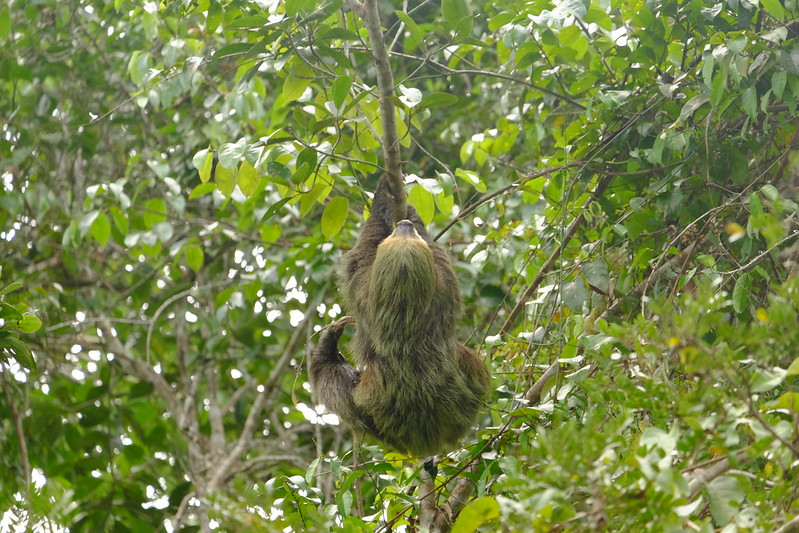 Awesome, yes, but really – THE SNAKES??? I’m with Lisanne and the group living situation. Your photos are wonderful–do you have sophisticated equipment, or can you do this with iPhones? Are you two super brave, or does the malaria pills turn you into superheroes?

I look forward to your posts. I feel as if I’m there with you as I read.

Stunning photos! The sloths are adorable. The tarantula – not as cute. You actually went out by yourselves to look for snakes? I would have had snake nightmares for weeks.

Wow! Such amazing pictures. You guys are brave- hiking at night and seeing snakes?? Glad you didn’t experience the heat and mosquitoes! Has been raining like crazy here in Illinois and a lot of mosquitoes so maybe I need malaria pills lol.

Ohhhh HELL NO! You weren’t kidding in the email saying this leg of the trip wouldn’t have been for me… did you want to throttle the guide??? Your pictures are beautiful (except for the snake one) but I think this is now at the top of the “never-need-to-go-to-list”! I’m very content just reading about your adventures. I cannot/will not do anything snake related. I’ll continue to pray for safe travels, but please stay away from the snakes!

Kim, you make me laugh!! I have the same thoughts as the others- swim in the lake? walk around at night? I think you are more adventurous than me (Troy, maybe). How beautiful!!

You SWAM in a lake in the Amazon?! 😳 We may need to do an intervention! 😜What an adventure of a lifetime! Thanjs for the updates!

Awaiting the next blog–no way it can top this one.

As always love reading about your adventures. I think you are very brave!