The huaso (Chile’s name for its cowboys; Argentina calls them gauchos and we did hear them called gauchos down here too occasionally) who led us on our horse ride in Torres del Paine told us about the annual rodeo in tiny, nearby Cerro Castillo, which is a 3-day event that happened to be starting the night after our horse ride. The park was even sending a bus over to the event so those working in the park could attend, and some of the huasos were competing in it. He told us there would be a big party that first night, and we should definitely try to make it. Just so happens we were going to leave the park that next day and drive through Cerro Castillo on our way out of town, so we thought we’d check it out.

I would say Cerro Castillo’s population is about 150, certainly less than 200. So here we are, two gringos in this obnoxious camper van, pulling into this tiny Patagonian village where many men are dressed as real huasos. Because they are real huasos. We were in a line of cars, and when we made our way to the front of the line we found two men handing out a map of the town and schedule of events, part of which — the part next to the map of the town that listed out its highlights, like the horse statue and supermarket — was inexplicably in both Spanish and English. We heard that only 3% of Chileans speak English, and that sounds about right based on what we’ve experienced, but I do not believe any of those 3% live in Cerro Castillo. But I digress. The men gave us and our van a curious look, then asked us if we wanted a program, as if there might be another reason we would be there. “Si si, senor,” we said, and they proudly gave us one with a big smile and one last long look at our van. 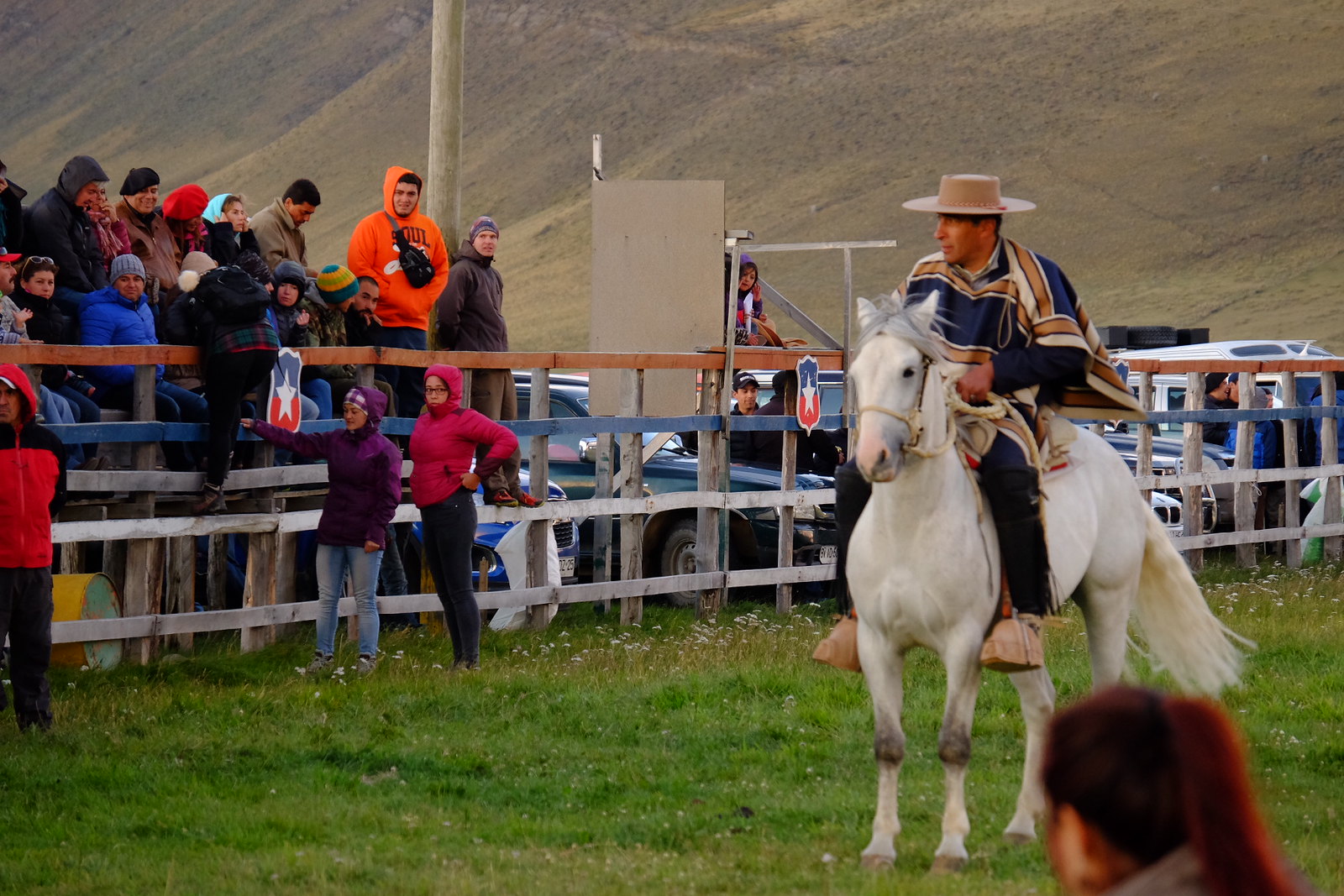 This is a traditional huaso hat, which, when working, is mainly worn outside Patagonia.

We didn’t see any rodeo events, but we did see an authentic small town festival, for which the entire town and then some turned out. We saw huasos who seemed to be one with their horses, and as Peter, who grew up riding horses, said after seeing one man ride across a field and into the crowd, “Now there’s a guy who has spent a lot of time on that horse.” 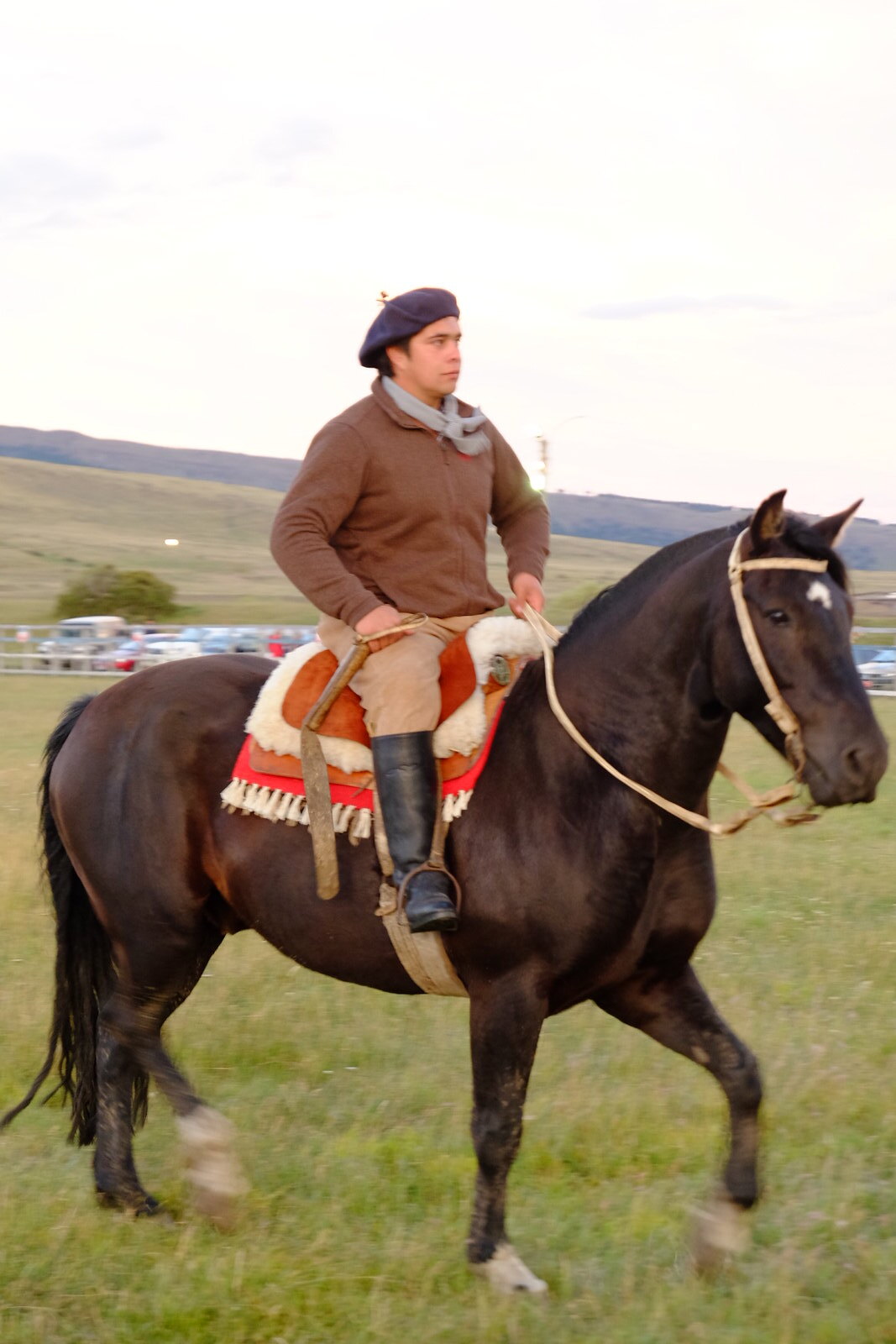 This is a Patagonian huaso hat, very similar to a beret, worn there because of the consistently high winds. They move the “brim” around to shade their eyes as needed.

We got to see pairs of children dance a dance we now know was the Cueca, Chile’s national dance. It was a pretty cool dance. Here is a description of it:

“The clothing worn during the cueca dance is very traditional Chilean clothes. They wear black costumes or dresses. The men in the dance wear the huaso’s hat, shirts, flannel poncho, riding pants and boots, short jacket, riding boots, and spurs. Women wear flowered dresses. Cueca dancing resembles a rooster-hen relationship. The man approaches the woman and offers his arm, then the women accompanies him and they walk around the room. They then face each other and hold their handkerchief in the air, and begin to dance. They never touch, but still maintain contact through facial expressions and movements. The white handkerchief must be waved; this writer has seen Chileans using paper handkerchiefs from a box rather than dance the cueca without one.” 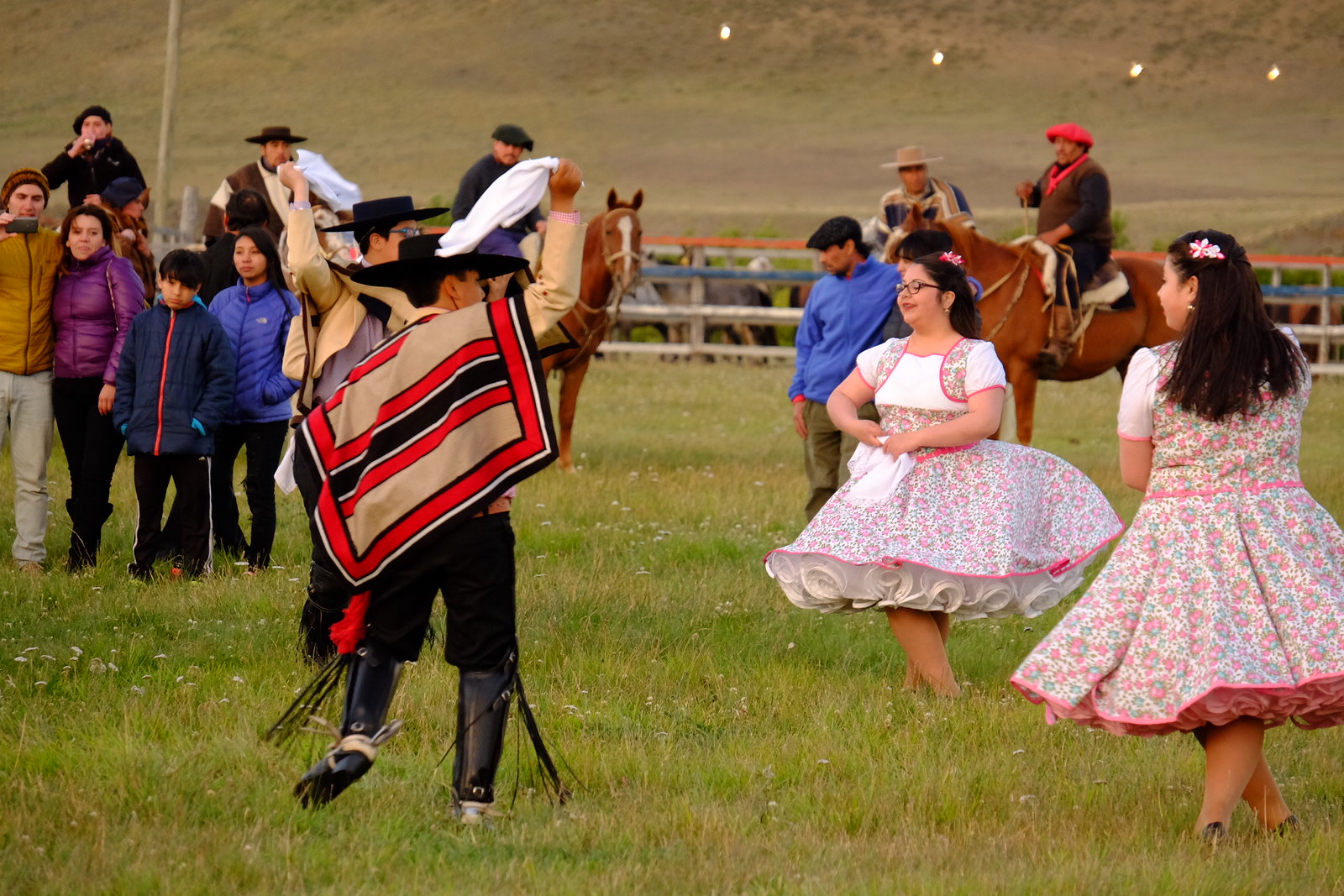 We would have loved to stay and see some of the rodeo events, but that would have entailed staying overnight and losing a day in Los Glaciares National Park, which we had little time for anyway. We left after the opening festivities came to an end, when presumably everyone was getting ready for the big party that apparently goes well into the wee hours. 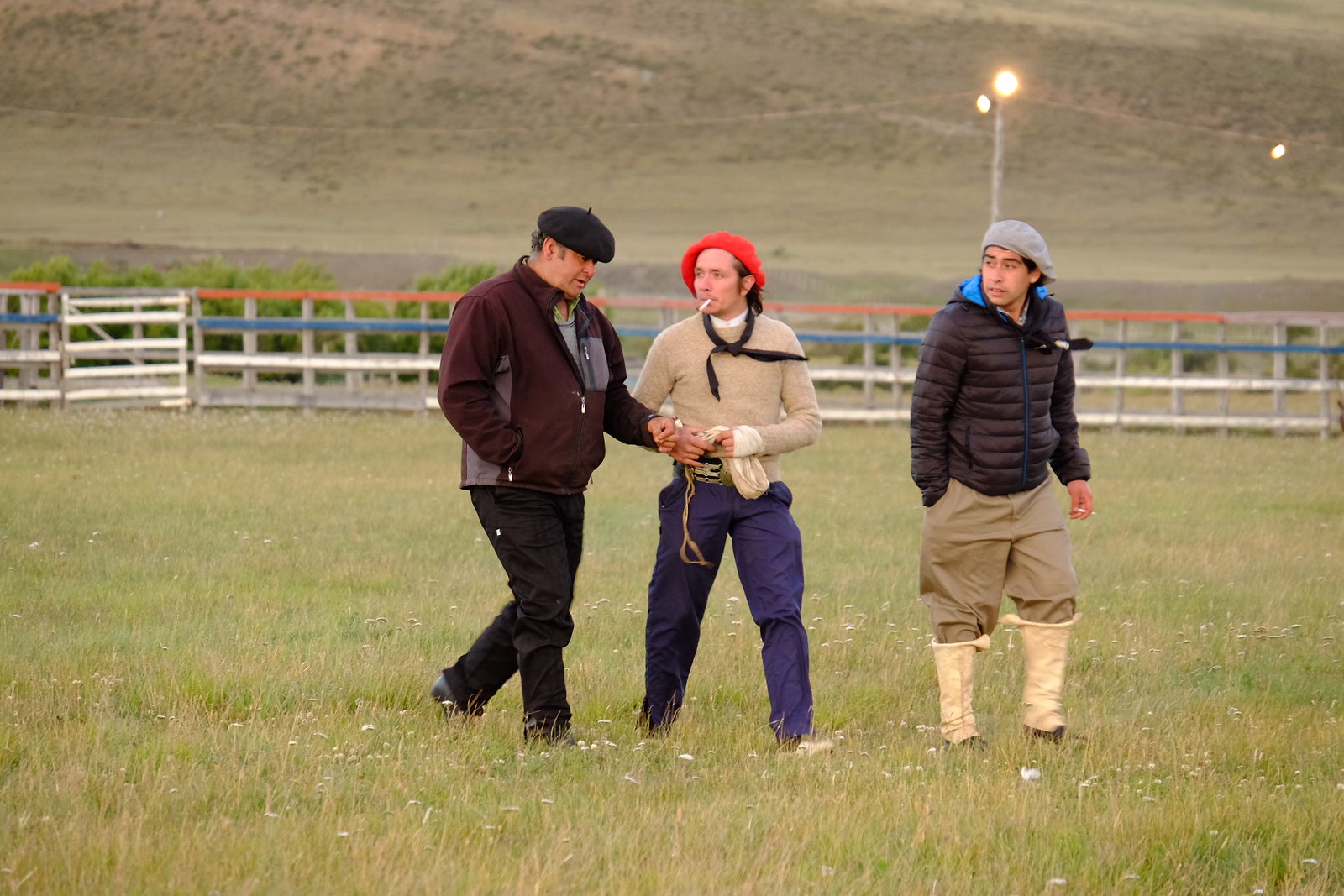 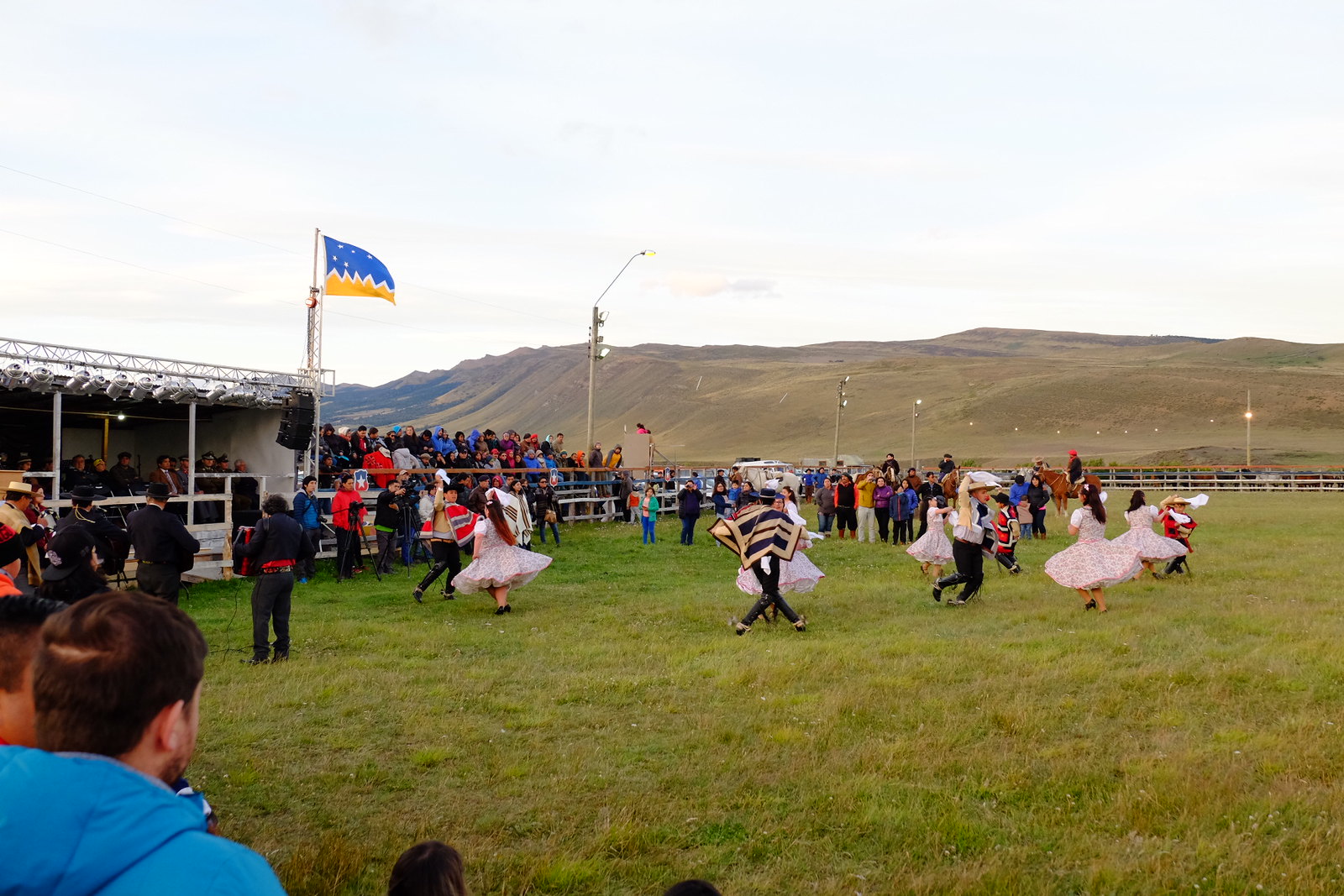 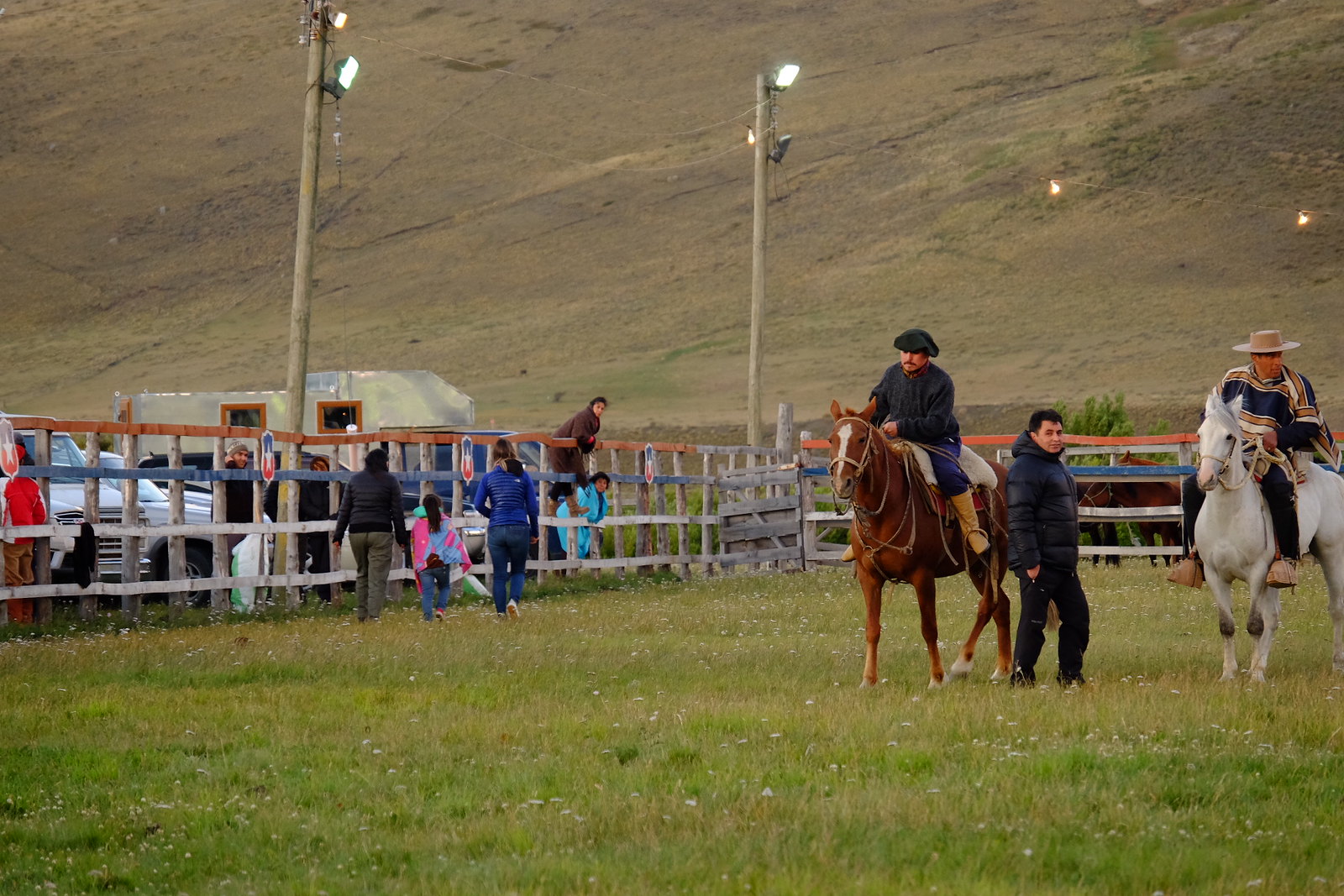 Great depiction of this cultural event. Made me think of a 4th of July rodeo I attended in Babb Montana a long time ago. I was sitting on the split rail fence when a bronco kicked the middle rail out from under me and bucked his way into the parking lot. The city kid from Chicago was pretty shocked.

Seeing the world through your eyes! It is beautiful, thank you!