After leaving Torres del Paine, we set out to cross into Argentina once again. This is the kind of country where you need to pay attention to your gas tank because there are few towns and fewer still with gas stations. 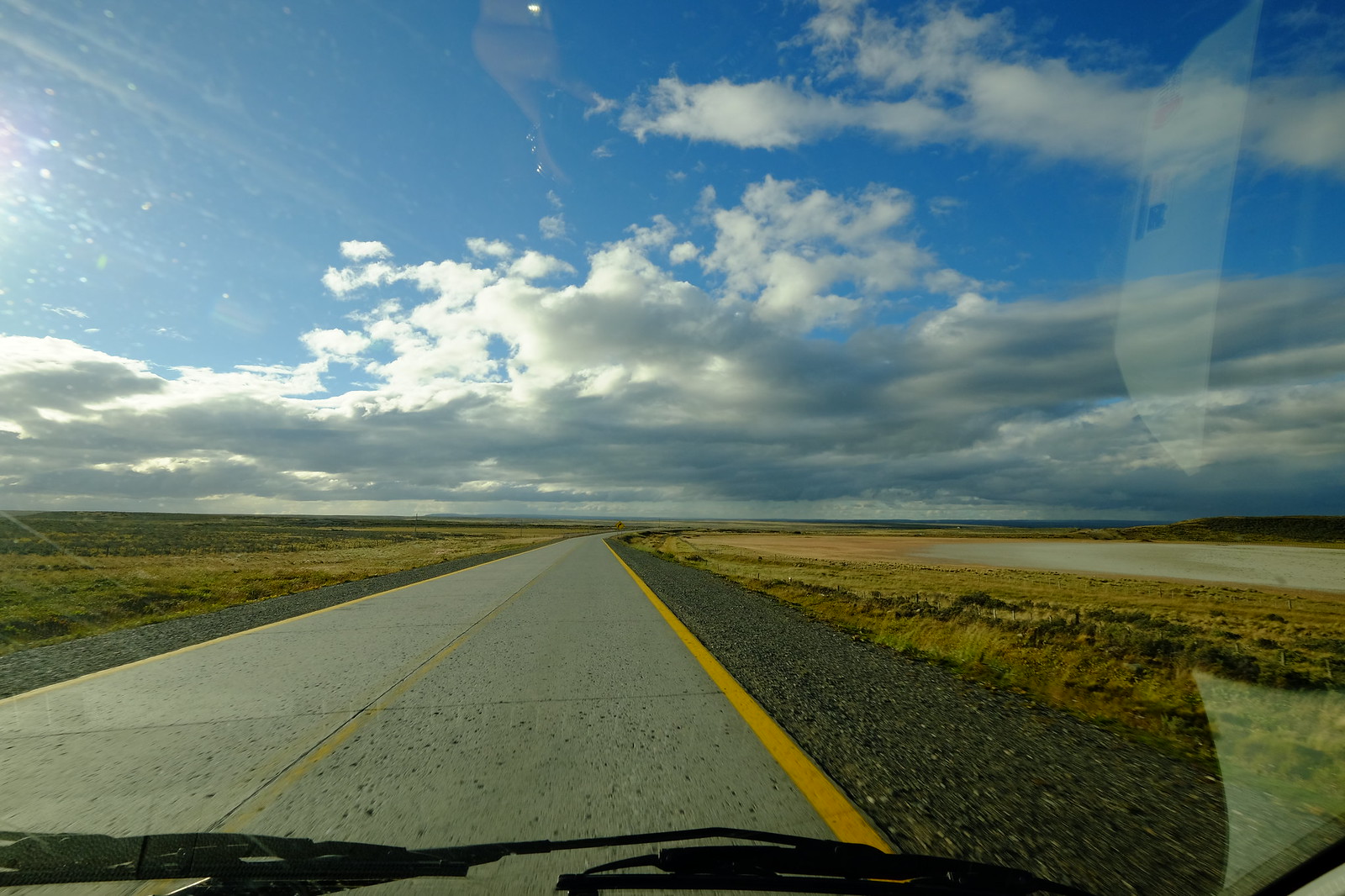 On top of that, Alejandro from the camper van rental place — and by “rental place” I mean his house on a gravel road outside of town — had warned us that although in Chile there’s never an issue, in Argentina the gas stations can run out of gas for one or two days and it had happened to him before. Another guy told us he was stuck in a 5 km line at a gas station once in this part of Argentina. Luckily, this didn’t happen to us, but now we understand the reason for all the jerry cans on vehicles down here.

There were two areas of the Los Glaciares park we wanted to see. The first was the Perito Moreno glacier, which is about an hour out of the town of El Calafate. It’s one of the few glaciers in the world that is advancing, apparently by up to 2 meters per day.

One can “wild camp” in Argentina and Chile, other than in the parks, so there was no problem just pulling the camper van off the road anywhere and parking it for the night. Which we did, about 200 yards from the park entrance out of El Calafate. 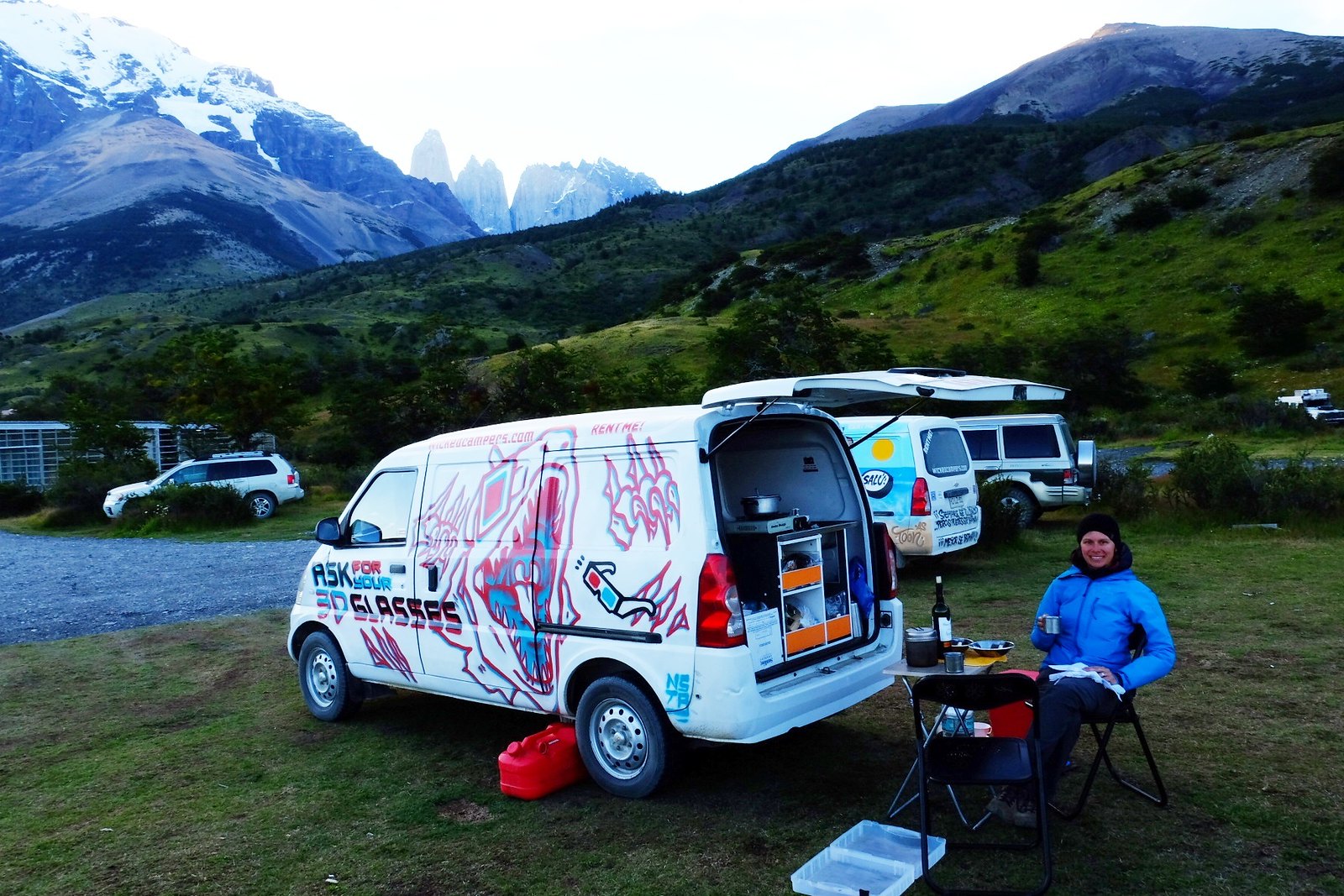 This was actually taken in Torres del Paine, but we did this every day and we forgot to include it in that post 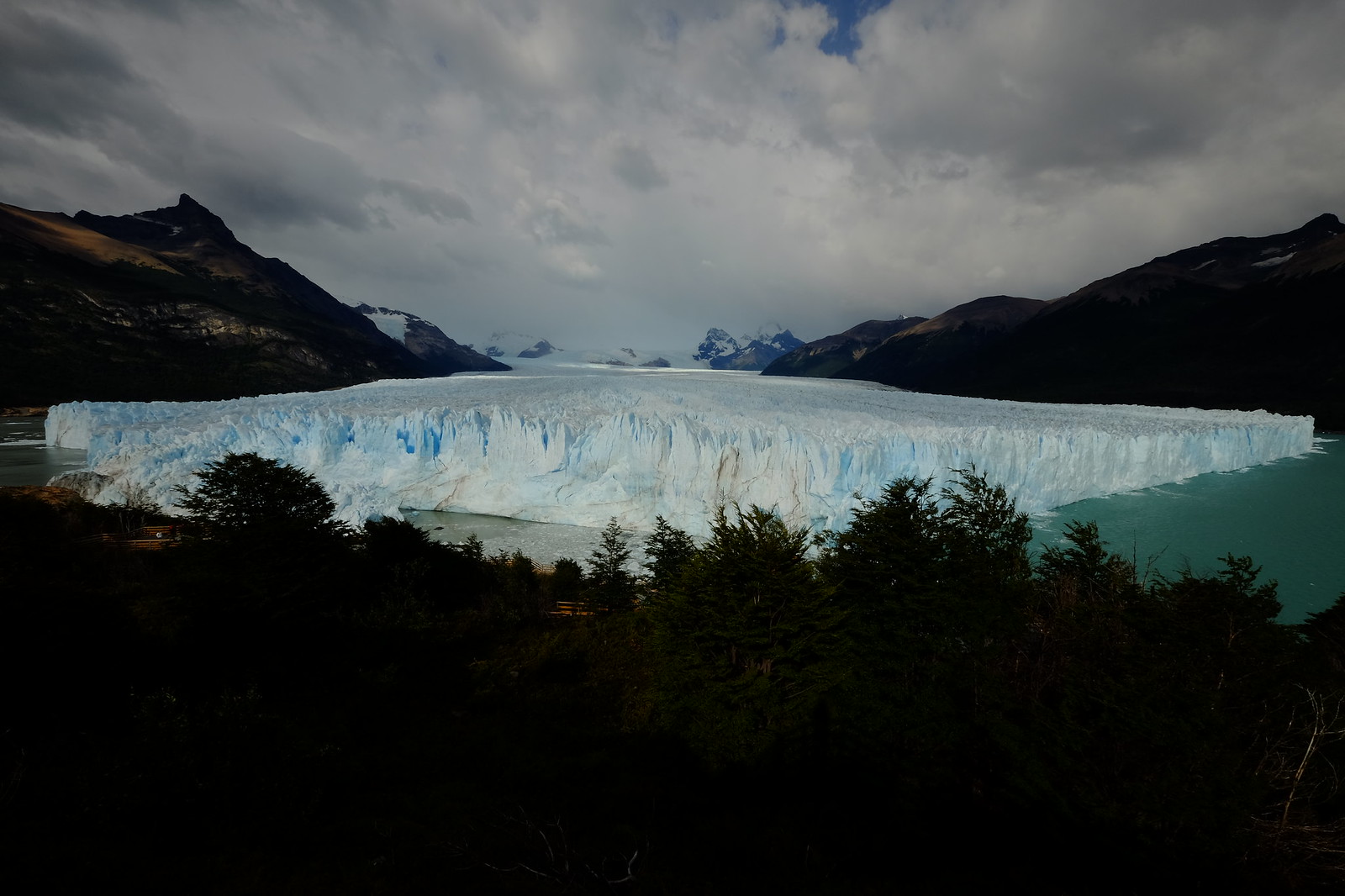 Perito Moreno, the face of which is 5 km across

The glacier was impressive and we saw quite a bit of calving in the two hours we were there, but then it started to rain so off we went to El Chalten, a tiny town overrun with Gore-tex in the summer from where the hikes to Fitz Roy and company begin, hoping for good weather there.

Due to a camper van pickup date fiasco, we only had 2 days to hike out of El Chalten. Alejandro had told us not to let the weather change our plans; even if it’s cloudy and rainy in the morning, the weather changes very quickly in these parts so it can be beautiful in a few hours. It was windy, rainy, and generally miserable when we got to El Chalten late in the afternoon, but the ranger told us that, based on the forecast, the weather would be good for hiking the next three days — low winds and no rain.

We woke up the next day to some wind and low clouds, but following Alejandro’s advice and hoping the forecast would prove correct, we set off on the trail to the most photographed place in the park where you get relatively close to the base of Fitz Roy. 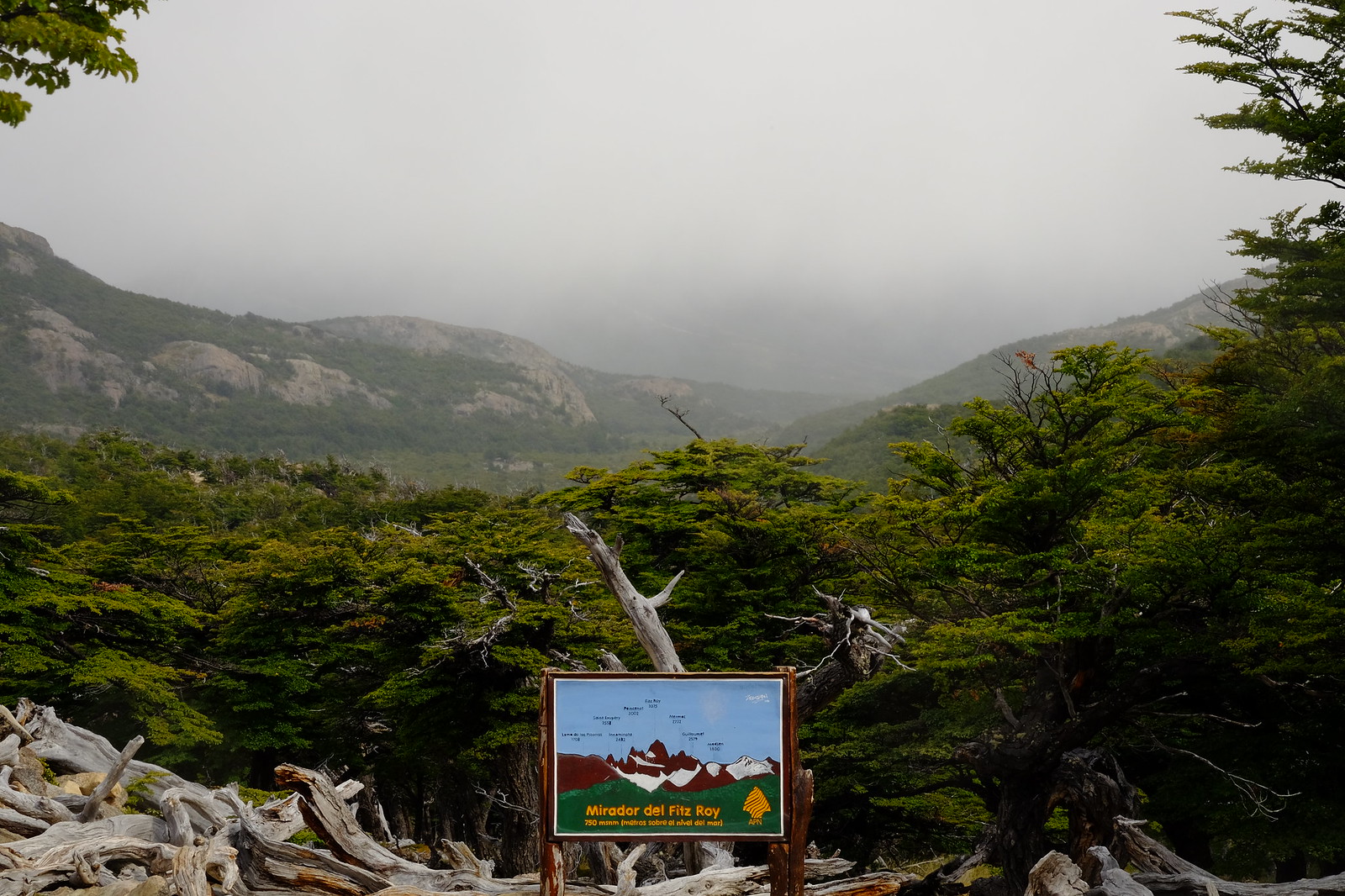 The 10-kilometer trail is relatively easy until the very end, where you gain over 1300′ of altitude in about a half mile. After 8 kilometers of on-and-off rain and barely lifting low clouds, it went like this:

Peter, who is not in the mood for hiking and not enjoying himself: “I’m done. I’m turning around. We can’t see anything, and the mountain is not going to come out.”

Me, experiencing an unusual abundance of energy: “We don’t know that. It has been slowly lifting. I think it could come out in a few hours.”

Peter: “It’s not coming out, Denise. I’m going back to read in the van.”

Me: “Fine. I’m going to go another kilometer and see if I feel like doing the last one.”

So Peter headed back. At KM 9, the clouds had continued to barely lift, but I decided I was here, we weren’t going to do this hike again tomorrow, so I may as well go to the top just in case. It snowed on and off on the way up, and was windy, but I was catching glimpses of the lower parts of some peaks so remained optimistic. I got to the top, it was pretty windy and snowing lightly, and I could only see enough to realize that this would be spectacular on a good day, which this most definitely was not. I found a big rock to hunker down behind, mostly out of the wind, and put on every extra piece of clothing I had to wait it out, figuring I’d give it an hour and then decide. 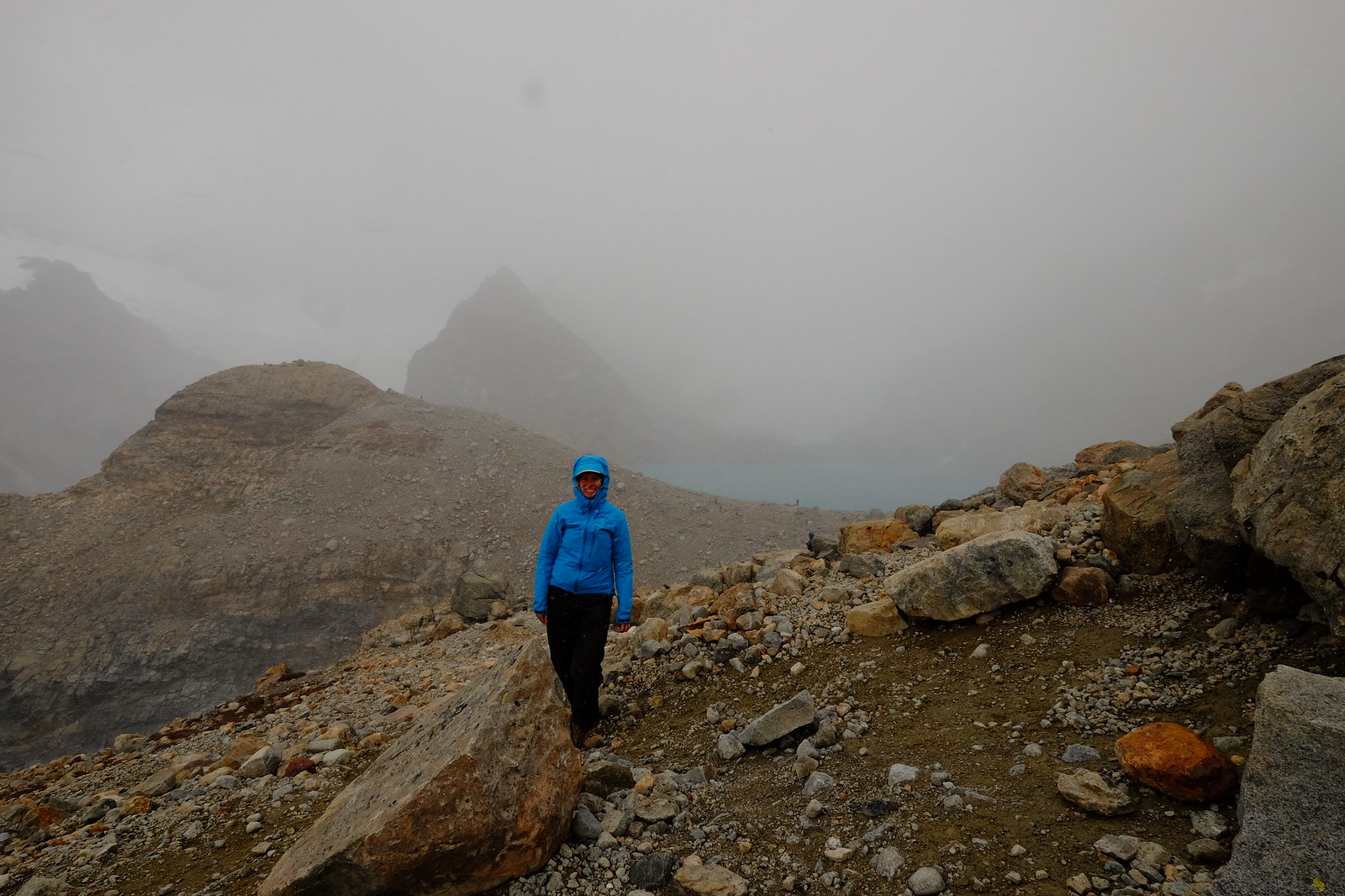 This was taken when the visibility was “good” at the top

After 10 minutes, it started to snow harder. After 20 minutes, it was snowing hard enough that the visibility had really deteriorated and my fingers were cold. Well, this was either going to pass or it wasn’t, I had no way to tell, and if it didn’t, I could be in trouble (along with the other 50 silly souls up there with me). So I started down. It was hard to stand up/walk at times on the way back due to the wind, which was apparently nothing for this area. We had read tales of tent poles snapping in the middle of the night. Happy to be in a camper van. 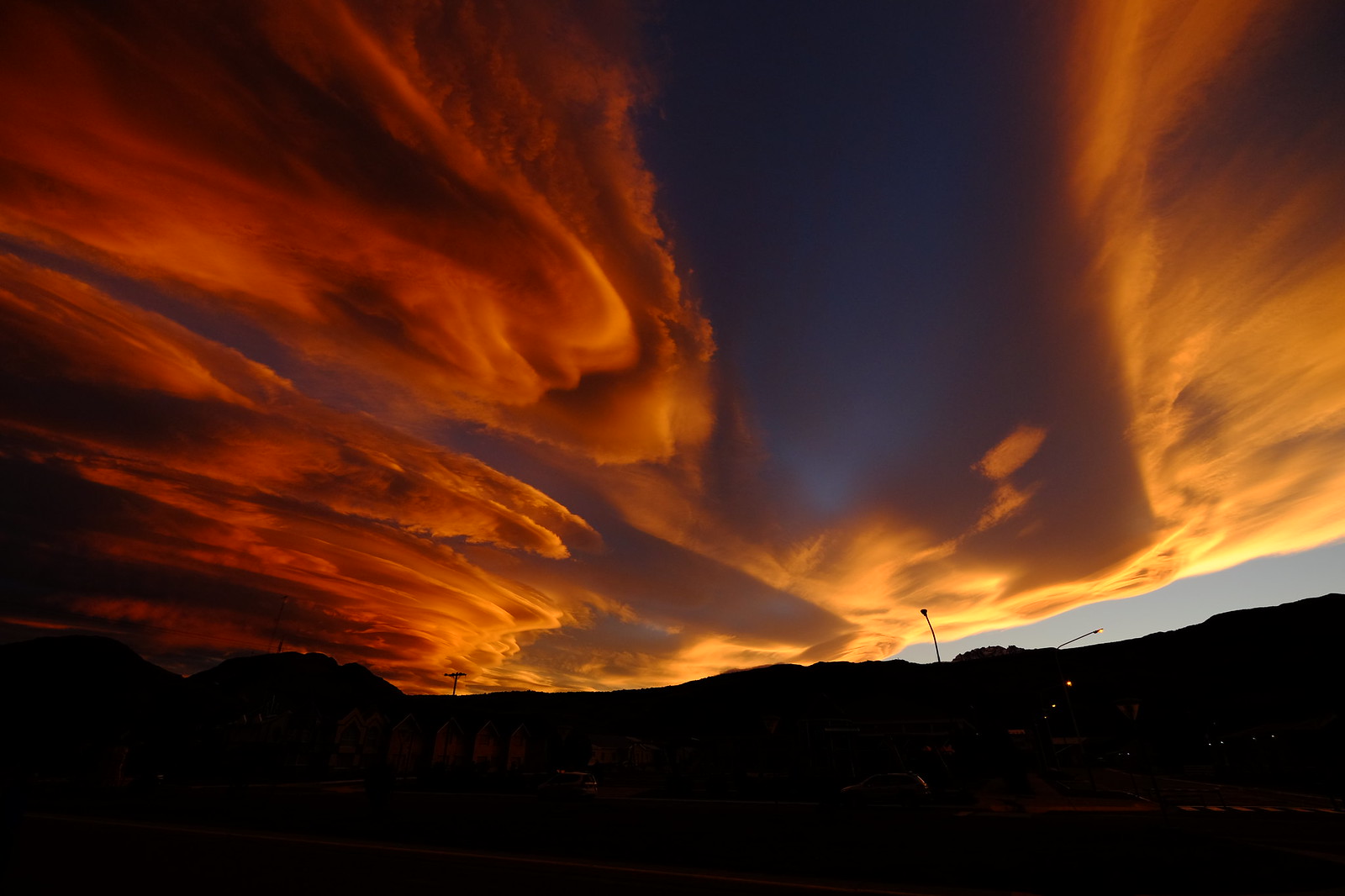 I’ve never seen cloud formations like this in my life, and assume they are due to the high winds aloft

The next day looked much more promising — the ranger at the trailhead said he saw Fitz Roy from town. Yay! We decided to do the same hike again since it’s the most popular for good reason in a park that has several fantastic hikes. Totally different experience, no wind to speak of and high clouds all the way. 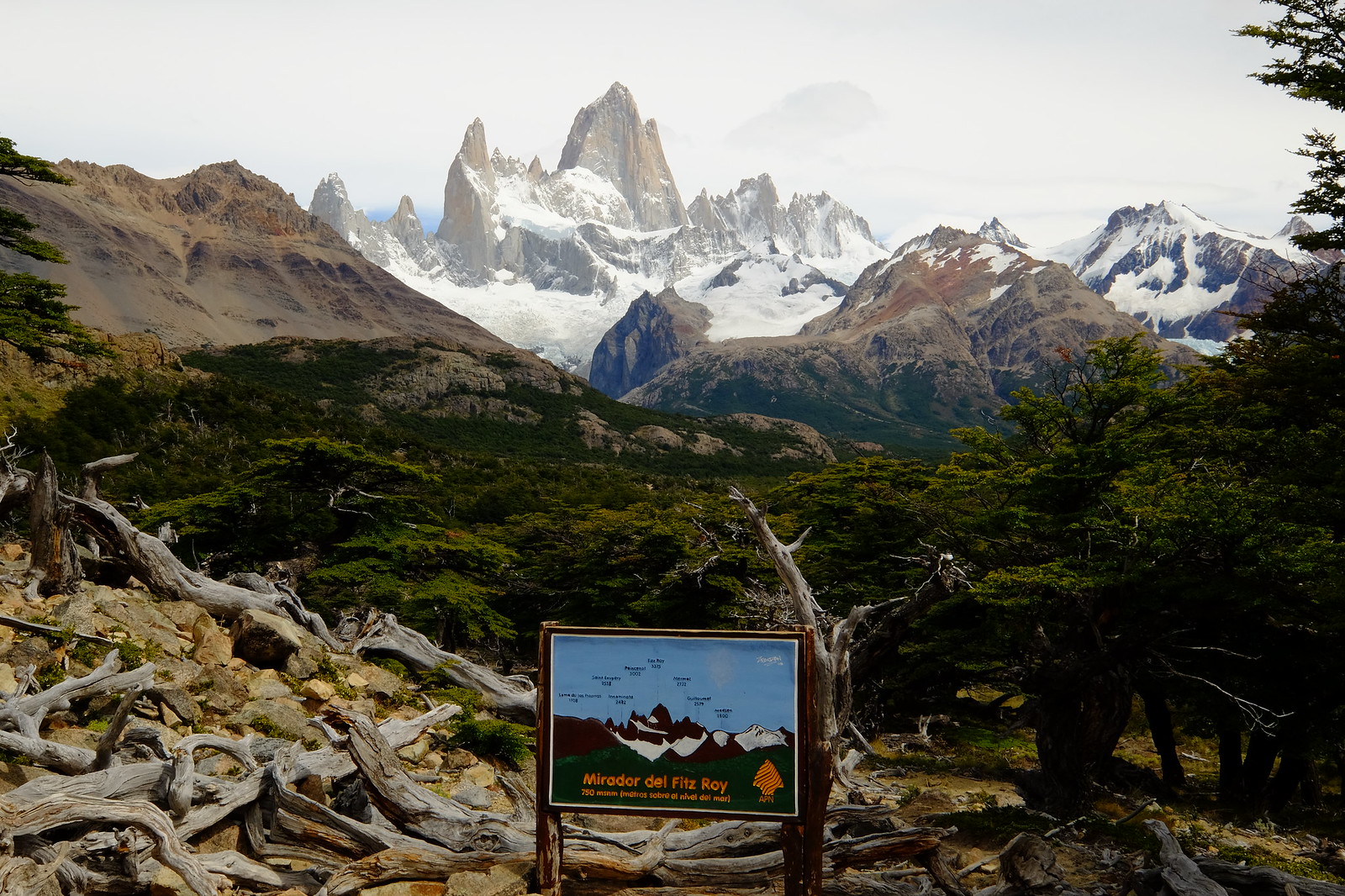 We left the next day, and after the long drive back to Punta Arenas, we caught a flight to Santiago. Our Patagonian adventures are over for now, but we ate some delicious local calafate berries, which according to legend, ensures that we will return someday. 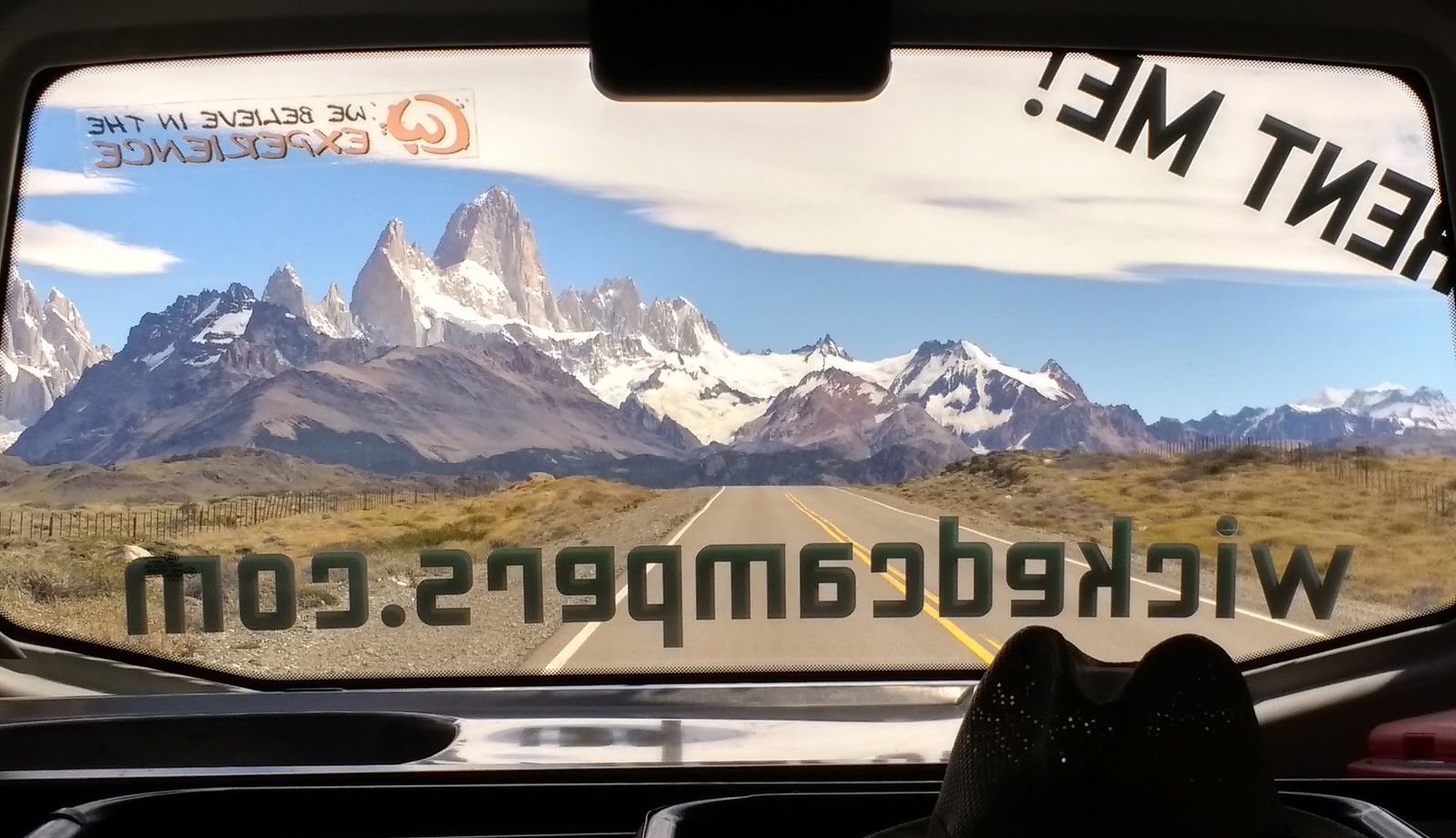 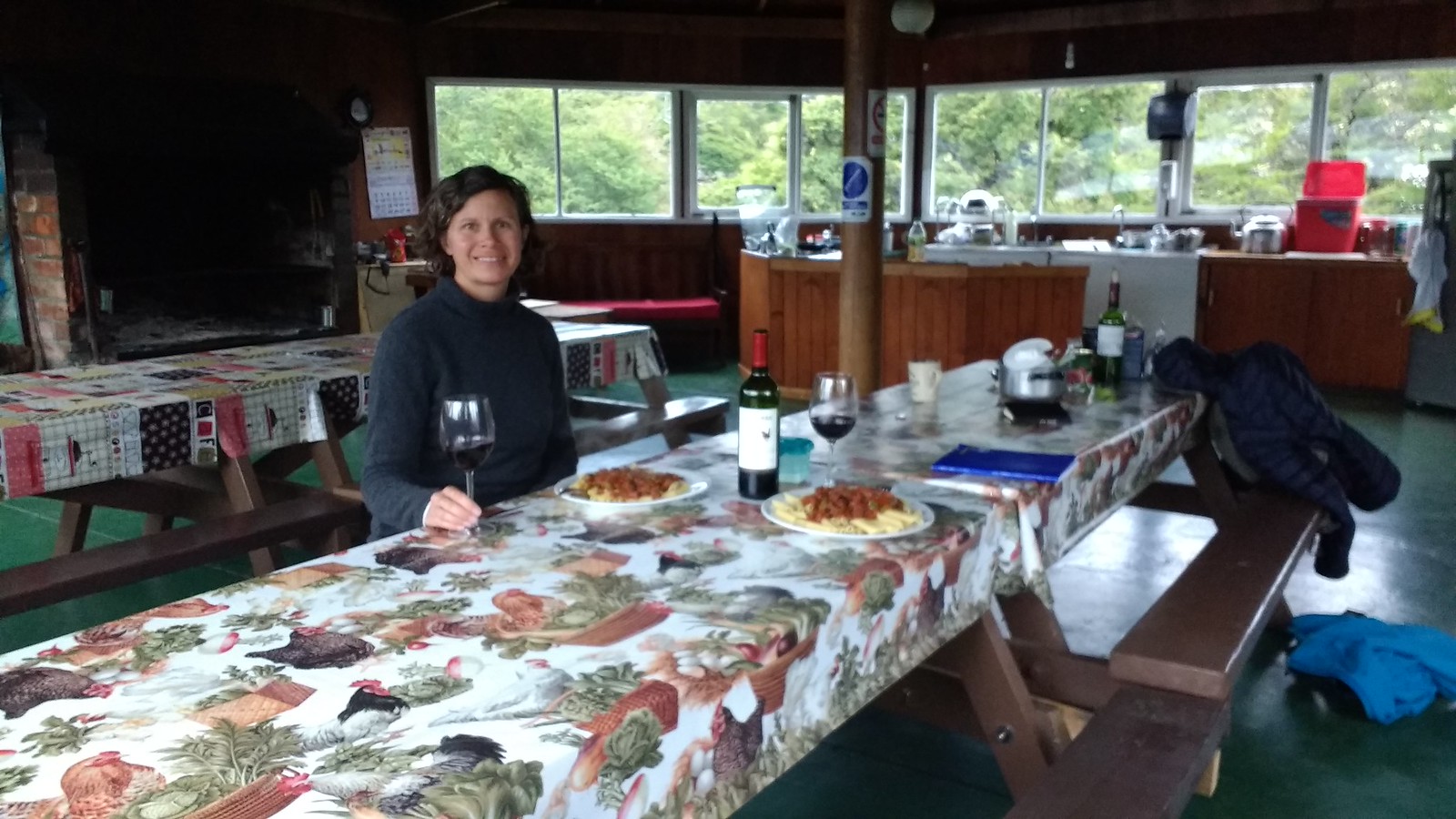 Your pictures of the glaciers and the cloud formations are absolutely stunning! I’m glad to hear you made it back safe on the bad weather day ~ scary! As I was reading your little argument, I could totally hear it in your voices 😂😂😂

PS : does your van come with a Partridge Family 8-track? I’m guessing it’s either that or the Scooby-Doo theme song! 😉 Stay safe and enjoy!

Thanks again for the update! I was very nervous as I read about your hike and Peter back in the camper! Thank goodness, you made it back safely!! The pictures of the glaciers and clouds were awesome!!

Beautiful photos of beautiful places! Thank you for sharing! Glad you made it down the mountain safely! I do not see any mushrooms in these locations

I am so enjoying your trip through these posts. You’ll have a whole book written by the time you return home as I’m sure you are writing more than you are posting. Beautiful photography and delightful writing. Enjoy!!!!!!

AMAZING glacier. Fitz Roy looks like something you’d see in a movie (Lord of the Rings) or something. Very cool. Glad you got to see it on a good day. Stay safe!

Awesome glacier. I’ve never seen one so symmetrical. At 2 meters a day, can you almost see it moving? You must have looked like Frosty on your descent!