Our last stop in east Africa was Uganda for a chance to see chimpanzees and mountain gorillas in the wild. After a short flight into Kampala, we set off early the next morning for a highly anticipated trip into Kibale National Park to see a family of habituated chimpanzees. I had previously read the book, Before the Dawn, by Nicholas Wade, which talked at length about the divergence of man from chimps and goes on to explore the remarkable genetic and behavioral similarities and differences we have with chimpanzees. And so, armed with book knowledge, I had an acute interest in seeing them for myself first hand.

We departed early in the morning from Kampala with our previously organized tour operator and after driving six or so hours, arrived at our tent camp. The camp was very nice and I would almost say luxurious. The tents were very spacious “pup” style tents attached to very well done stone inlaid bathrooms and had electricity throughout the night. The meals served were by and large first rate, though not particularly fancy, and we enjoyed them for our two nights’ stay. We were able to hike around the tent see some monkeys and mushrooms, which made Denise happy. 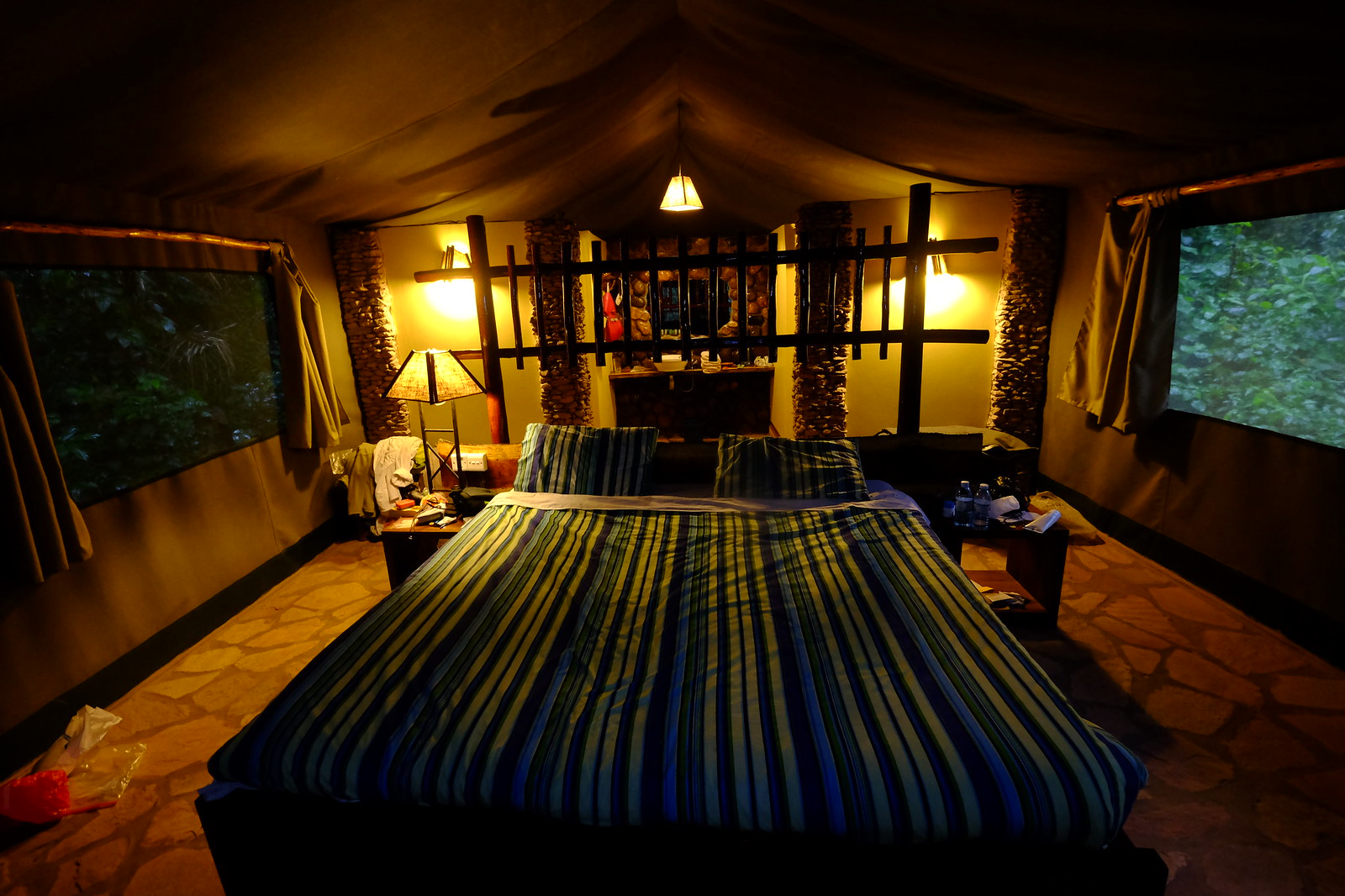 The following day, my birthday as luck would have it, we were driven to the park entrance to be assigned to a park ranger who would serve as our guide. In order to minimize our impact, while still allowing access, the park imposes a limit of eight tourists to visit each habituated family group on any given day for only about an hour. There are several families of chimpanzees in the park, but only about nine are habituated for us regular folk to see. Habituated families are wild but they are familiar with seeing humans and therefore don’t go run and hide, nor do they attack as a form of self-defense. Since humans and chimps are so closely related biologically, we needed to be careful not to spread any of our diseases to the chimps as many of our common colds and flus, etc. are easily communicable with them. After being thus organized and instructed on what to do and not do while among the chimps, we set off with the our other six guests in our group and our guide. There was also a spotter who had gone ahead to find the chimp family. We first heard the sounds, and loudly, well in advance of seeing them close up. 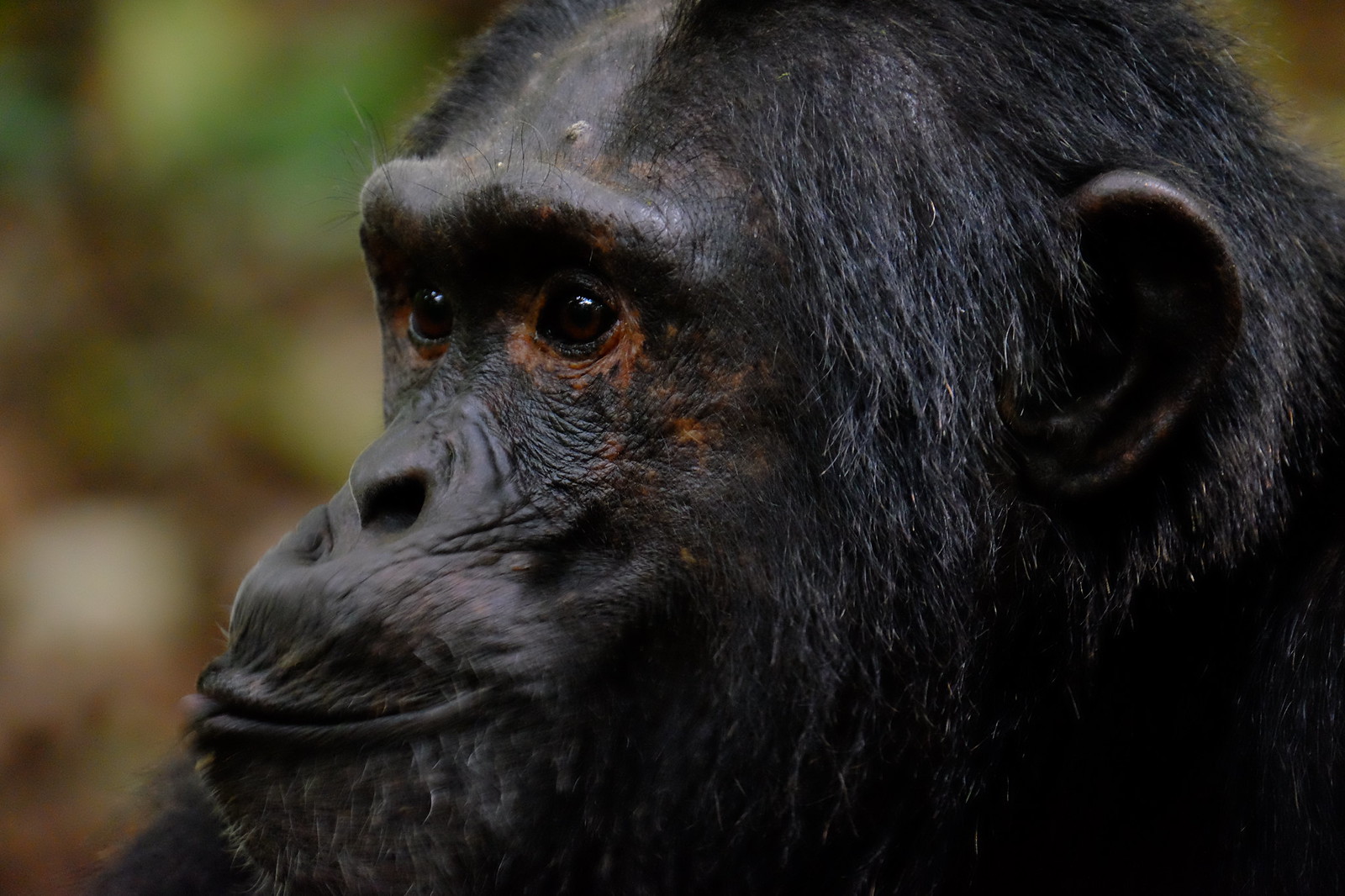 Once we were upon them, we were awestruck. I almost felt like we were on a set for a movie being acted out. The noises seemed to indicate to me that we were intruding on a particularly important set. The action was minimal so any disturbances would not be tolerated and a close eye was kept on the newly arrived visitors. Obediently, our group of tourists shuffled in behind our ranger/guide as we followed a female making her way to what we assumed was the larger group. Next we came upon two chimpanzees, one grooming the other. The intensity of the moment was offset by the grooming chimp looking furtively at the new stage hands and looking just like an experienced hairdresser deftly picking away at one foreign object then another. You could almost hear the conversation too. “Ethel, did you hear the one about curious George… ” Grooming, hair dressing, whatever was going on 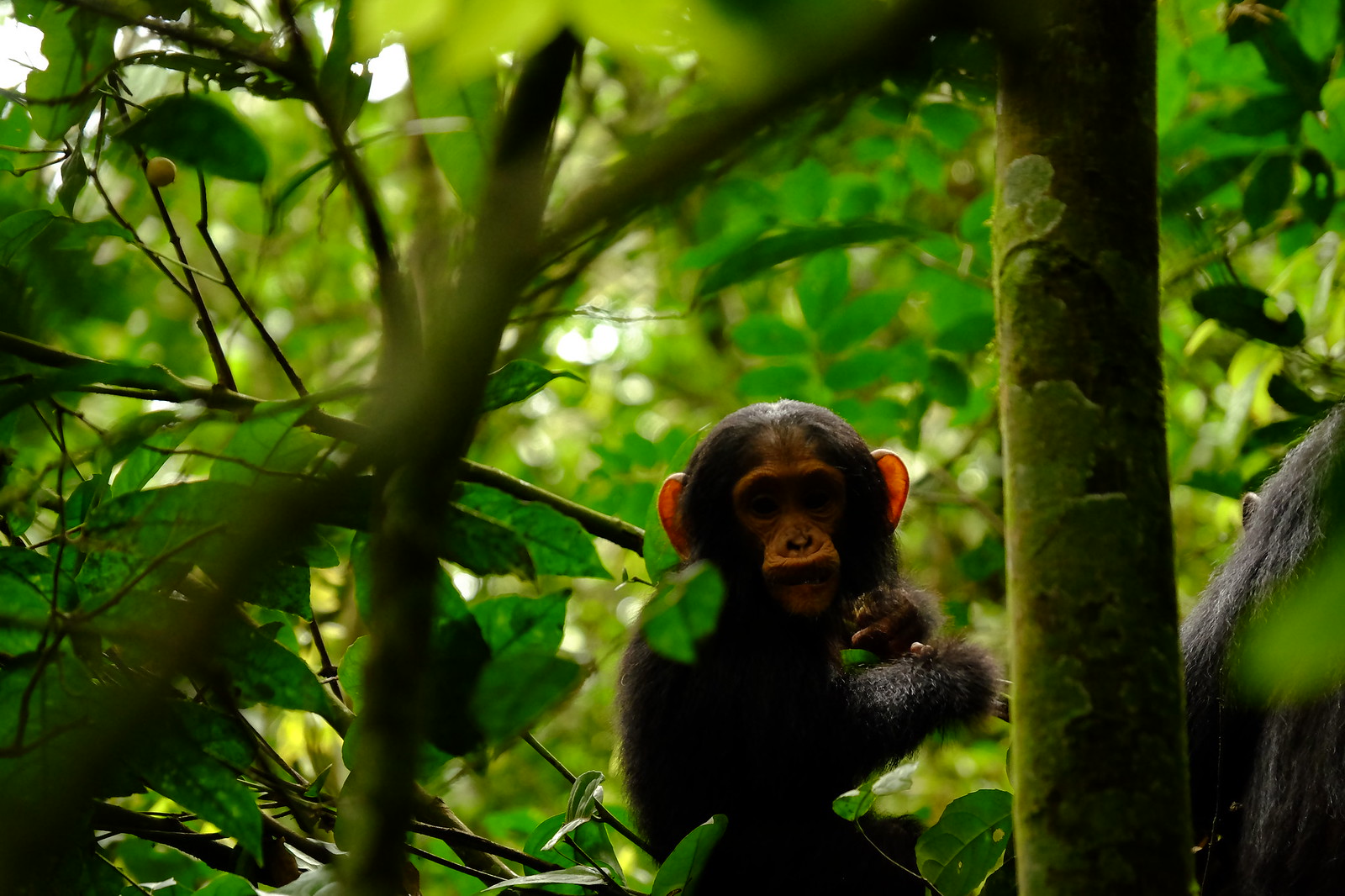 A baby chimp, whose face is much more “skin colored” than the adults

Some chimps, including a baby and its mom, were hanging out in the trees eating, while others were on the forest floor, taking a nap or just watching what was going on with the others. As we watched, some chimps would climb down from the trees making a noisy entrance as they did so. This coming and going, with its noise making and machismo, reached a crescendo toward the end of our allotted visit. At one point near the end, one of the chimps even ran right by me and nearly gave me a left hook on its way. Another tourist wasn’t as lucky, or maybe was more so, as he was thumped by an errant chimp fist, which he gleefully felt would leave a mark. Overall we saw over 30 chimps. They were bigger than we expected, and moved a lot faster, which made it exciting. Being habituated, we were able to get very close and actually look them eye-to-eye. It was here, hunkered down as I was, that I stared into the eyes of the great beasts and saw, and not for the last time, my own genetic reflection! Sadly, we were not there long enough to tally all the behavioral similarities that exist between chimps and humans, but I found it both hard to imagine and hard to argue with the scientific observation that we do indeed share something akin to 98 percent of our genome. I wouldn’t say we looked and acted exactly like them, but at the same time …


It was a good day. Now, having been fooled once already I was better prepared for Denise’s devilish surprises. No birthday songs to embarrass me. Not on this day. And so it was, I had caught her on two previous occasions acting suspicious. Needing an umbrella she said, indeed! “Ha, fool me once,” I told her, “shame on you.” Well. I was fooled again. I don’t know how it happened, but there it was, the dreaded birthday cake, and there too was I again, watching as though in slow motion, the staff marching out, their lungs expanding in anticipation, then the booming chorus which almost naturally follows. And lastly, my beet red face as all the members of the staff and my turn-coat companions at my own table boom into a happy birthday song. “Fooled again,” I muttered as I attempted to blow out the roman candles. 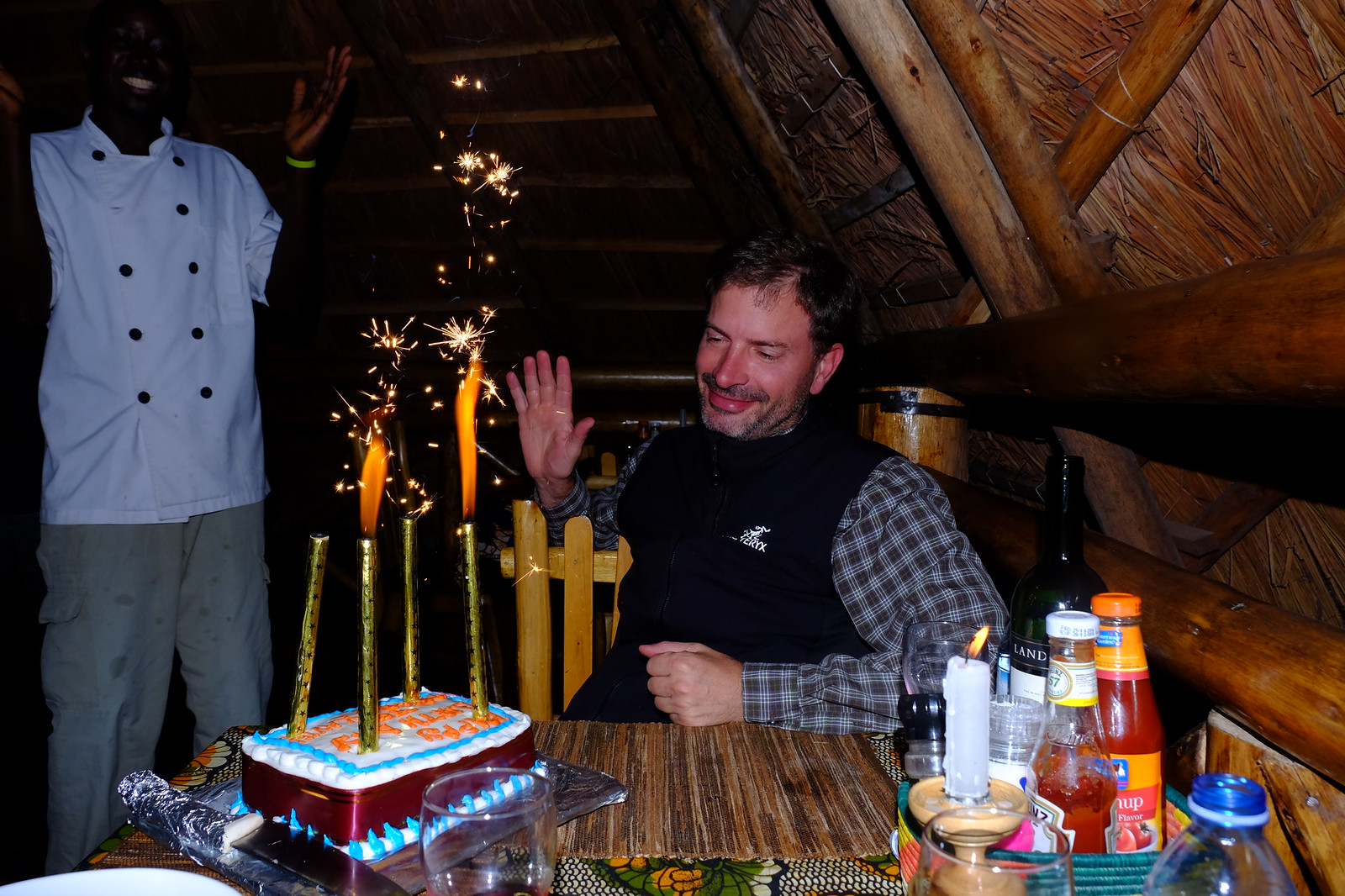 This really cannot be happening again… 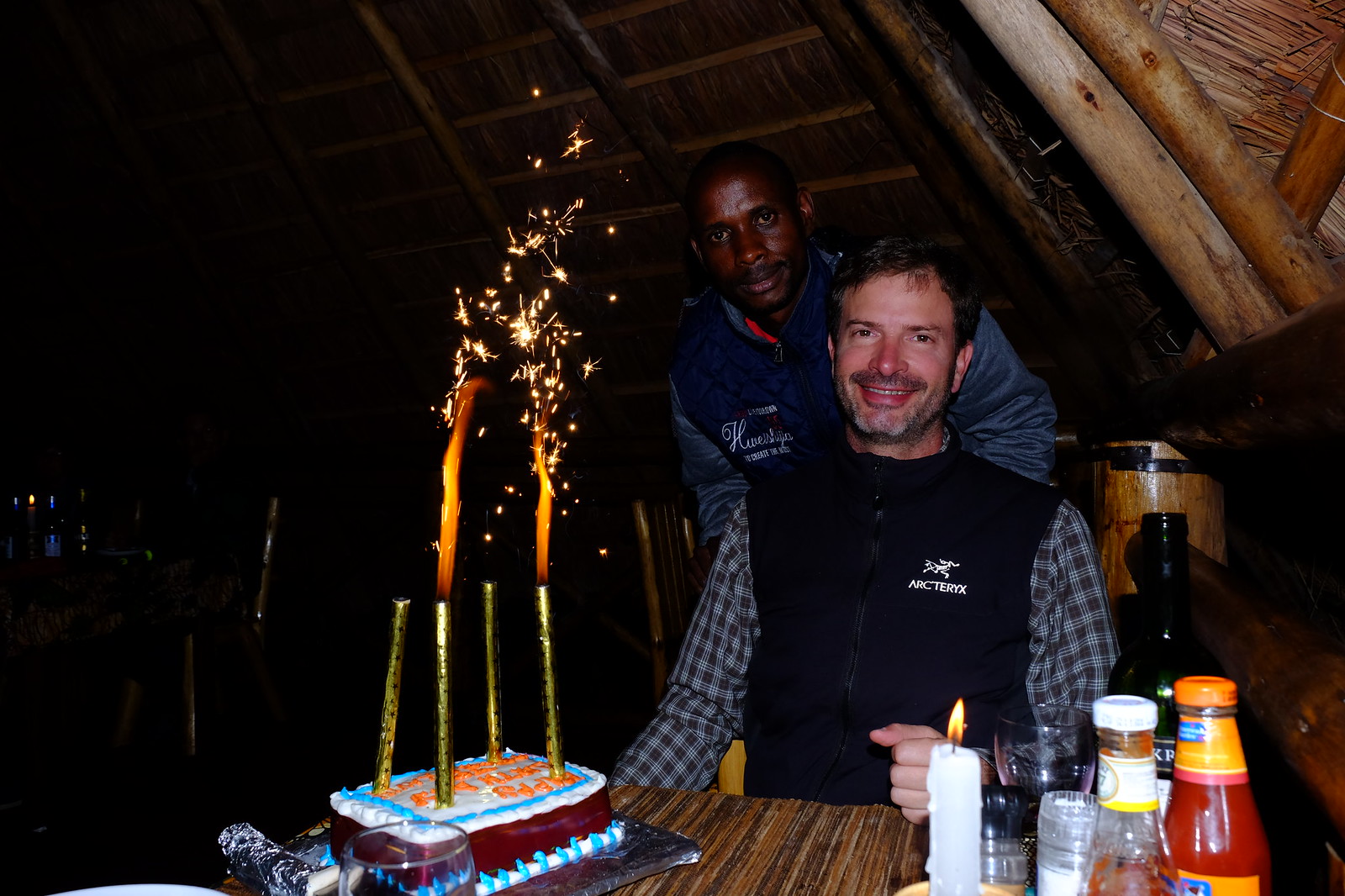 It so happened that the day after my birthday, Xavier, our driver, celebrated his.

Happy Thanksgiving to everyone! For more chimps and cakes, click through the below: 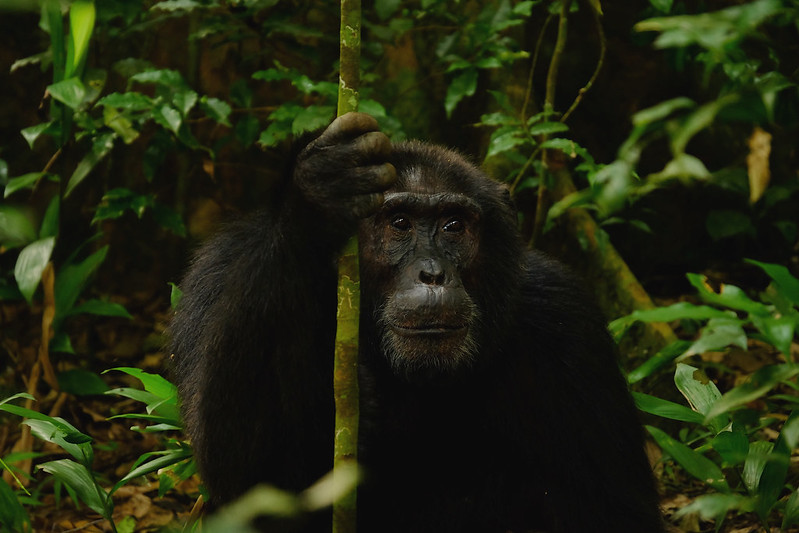 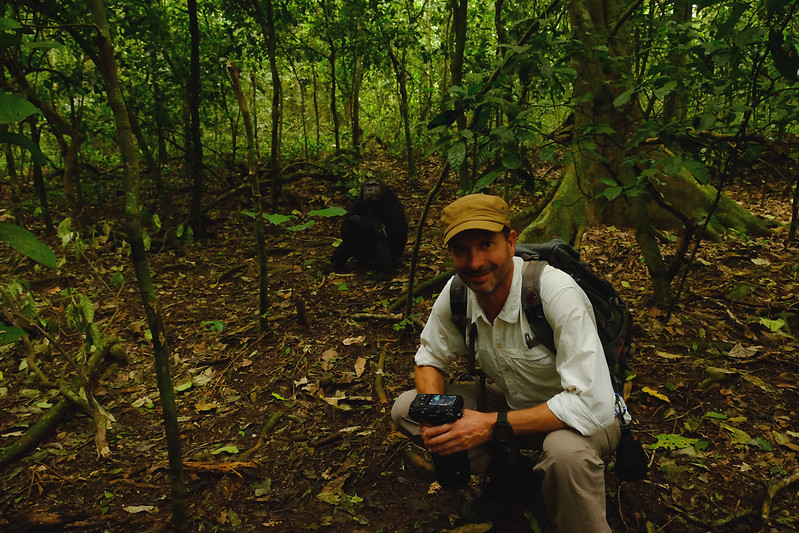 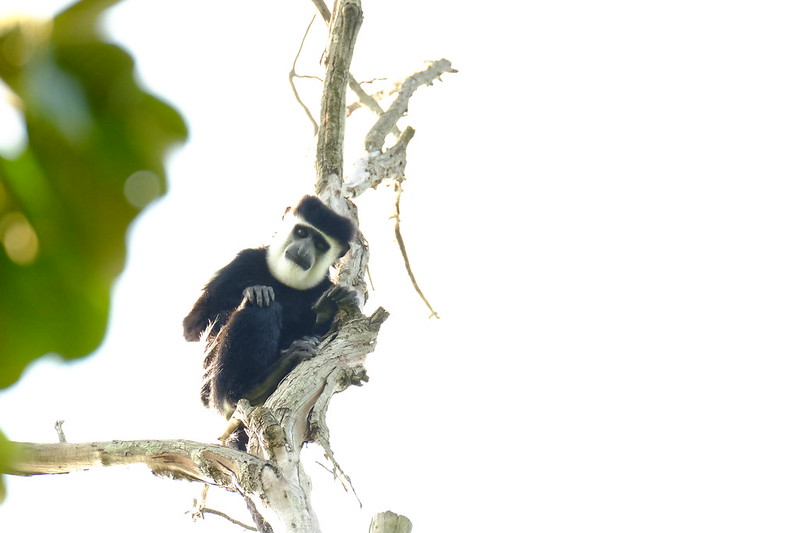 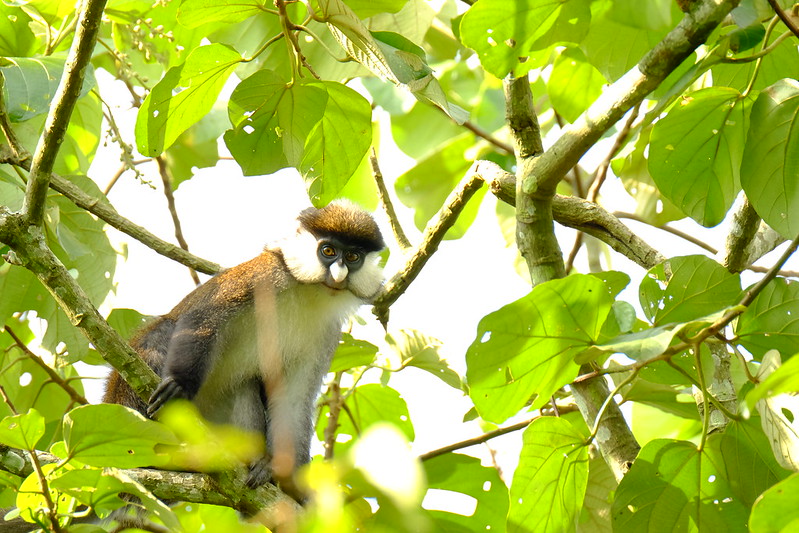 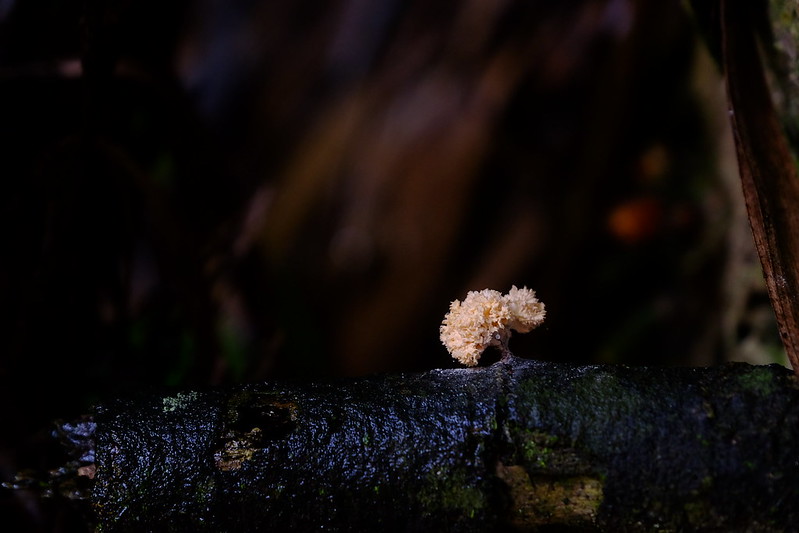 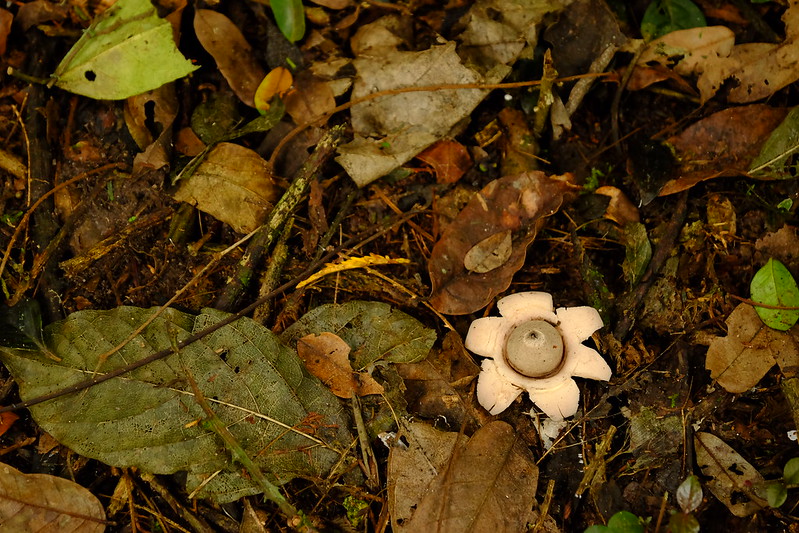 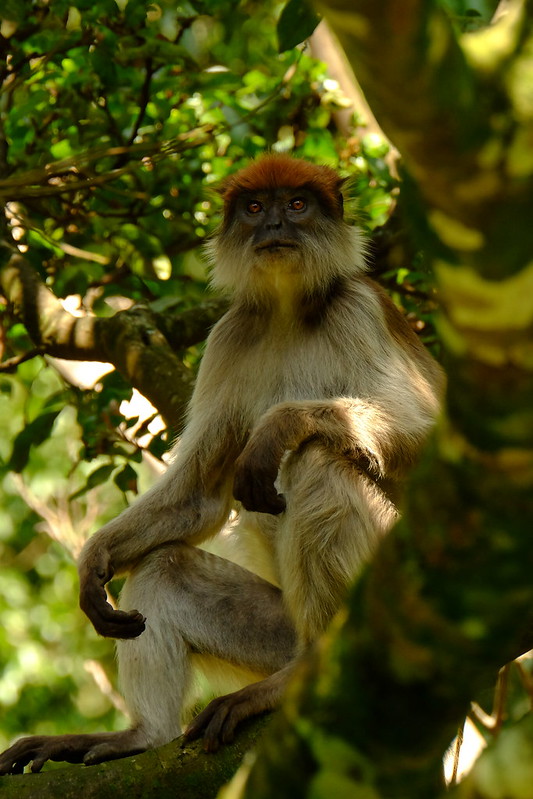 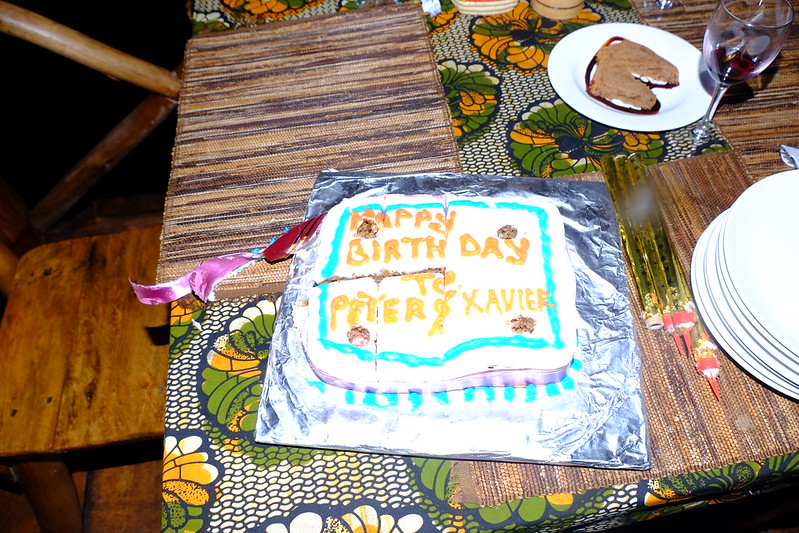 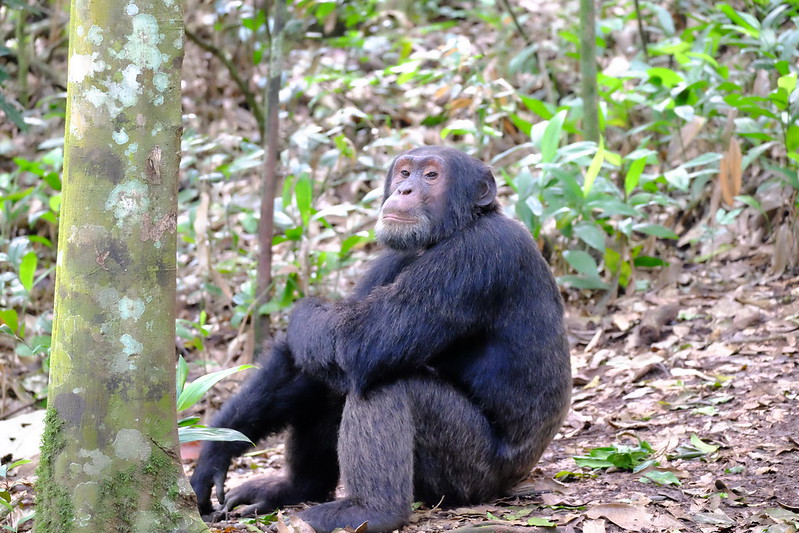 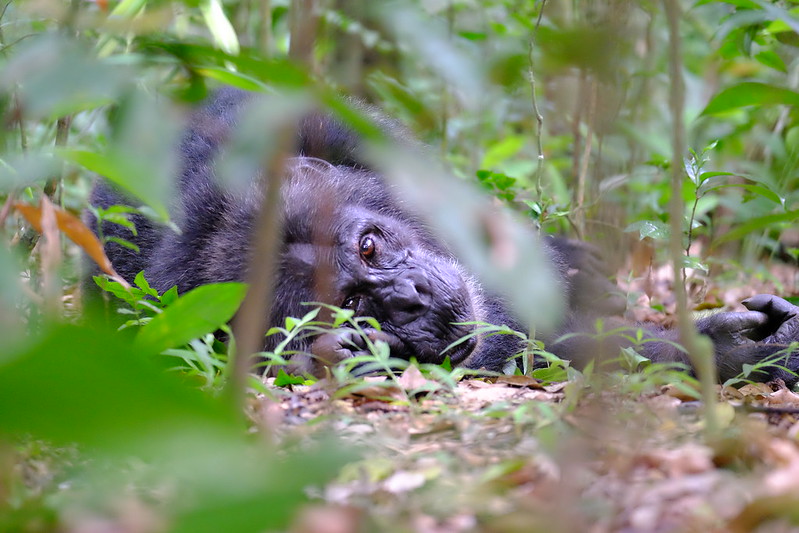 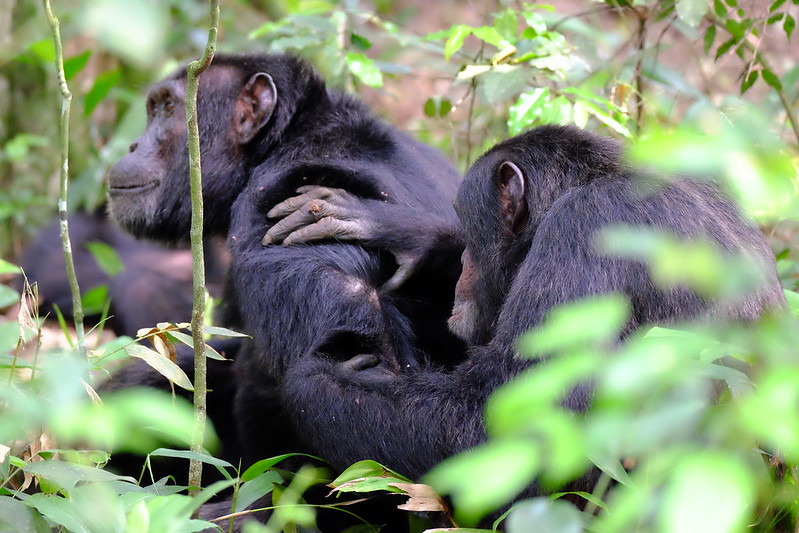 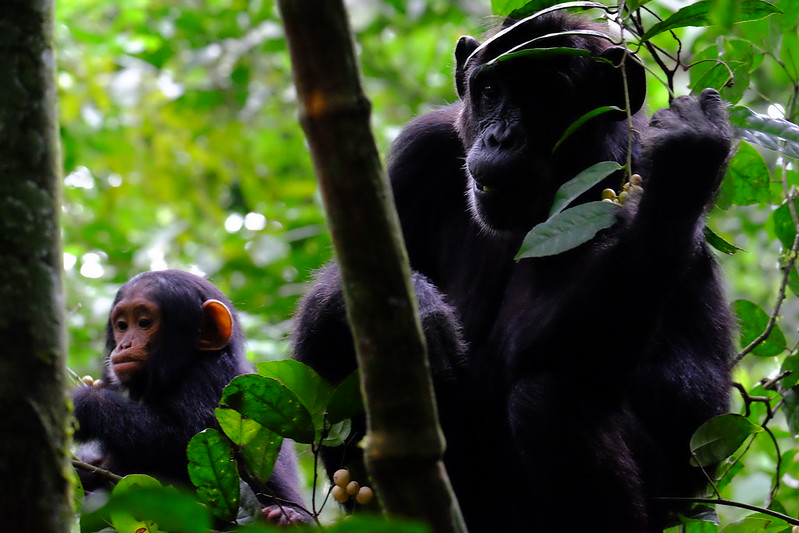 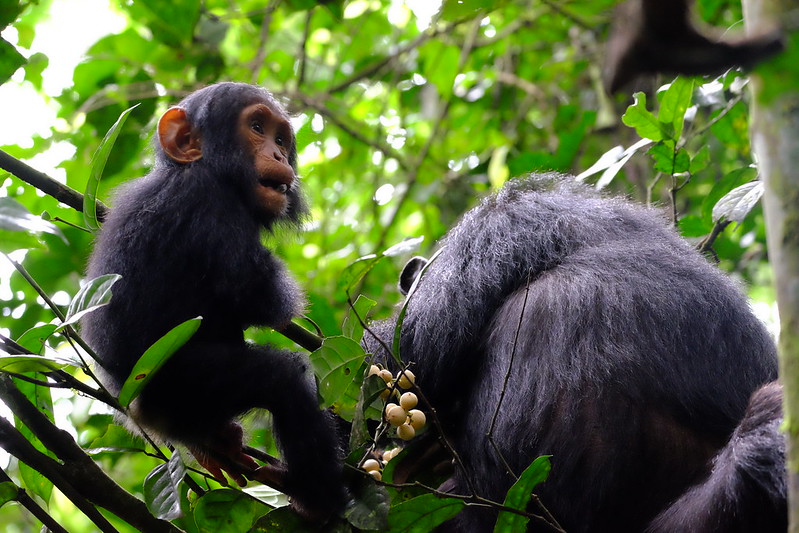 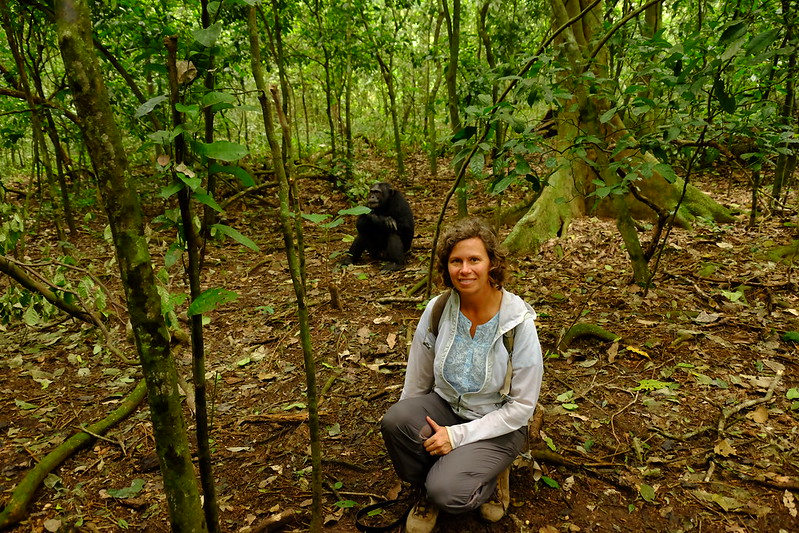 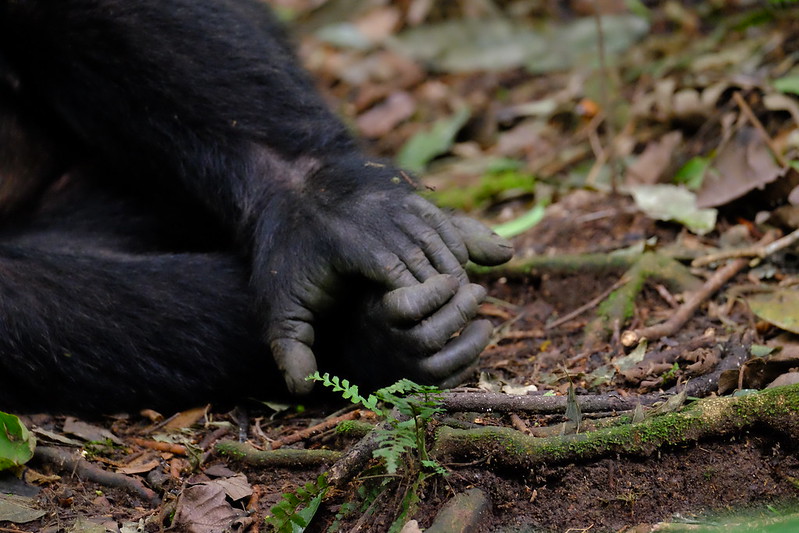 Peter I love the way you write your blog, it’s like a novel story or poetry. Thank you for liking and loving me as your safari guide in Uganda. Hope to see you again in future.

Fantastic! What an opportunity! I loved the video with its sounds of the wild chimps. So thrilling to watch and listen.

Really excited about this blog! Forwarded to my grand daughter who spent part of her summer in Uganda.

Thank you for another well documented blog….so interesting! I couldn’t get the video to work so feel badly about that! The pictures were awesome….thank you for keeping us informed about this fabulous adventure that you are on!! Safe travels!!

So fun ~ love the video and pictures! I love that they were able to surprise yet once again! Happy Birthday Peter (yet again) and Happy Thanksgiving to you both! Continued prayers for safe travels!

These photos are incredible. So happy you got to experience this.

Happy belated birthday Pete! So how can you fool Denise on hers coming up?! Thanks for sharing the videos, so awesome. The photo of the baby!!! Precious. How are you guys ever going to come back home?!