After visiting a few of Morocco’s more famous cities, we began to feel as though it was just “another day, another medina.” Although a little different, each medina was in the end quite similar. Marrakesh was our last city stop and is famous for the souqs in its medina, as well as its big square, the Djemaa El Fna, where they have many things going on day and night. They had all the requisite fascinations; snake charmers, henna artists, boxing matches, and other various performances. We went there a few nights and it was fun to see, but many of the performers were speaking Arabic so we didn’t understand much of what was going on. It wasn’t as crowded as I had pictured – not a bad thing. We were there in December, one of the coldest months (glad we still had our down coats!) and not a big tourist month, and I’m guessing it might be a bit livelier in warmer months. The souqs were similar to those in Fez, with the same variety of things for sale — camel heads, dates, spices, pillows, leather, carpets, lamps, etc. etc. I could very easily go back to Morocco just to shop for things for the house. 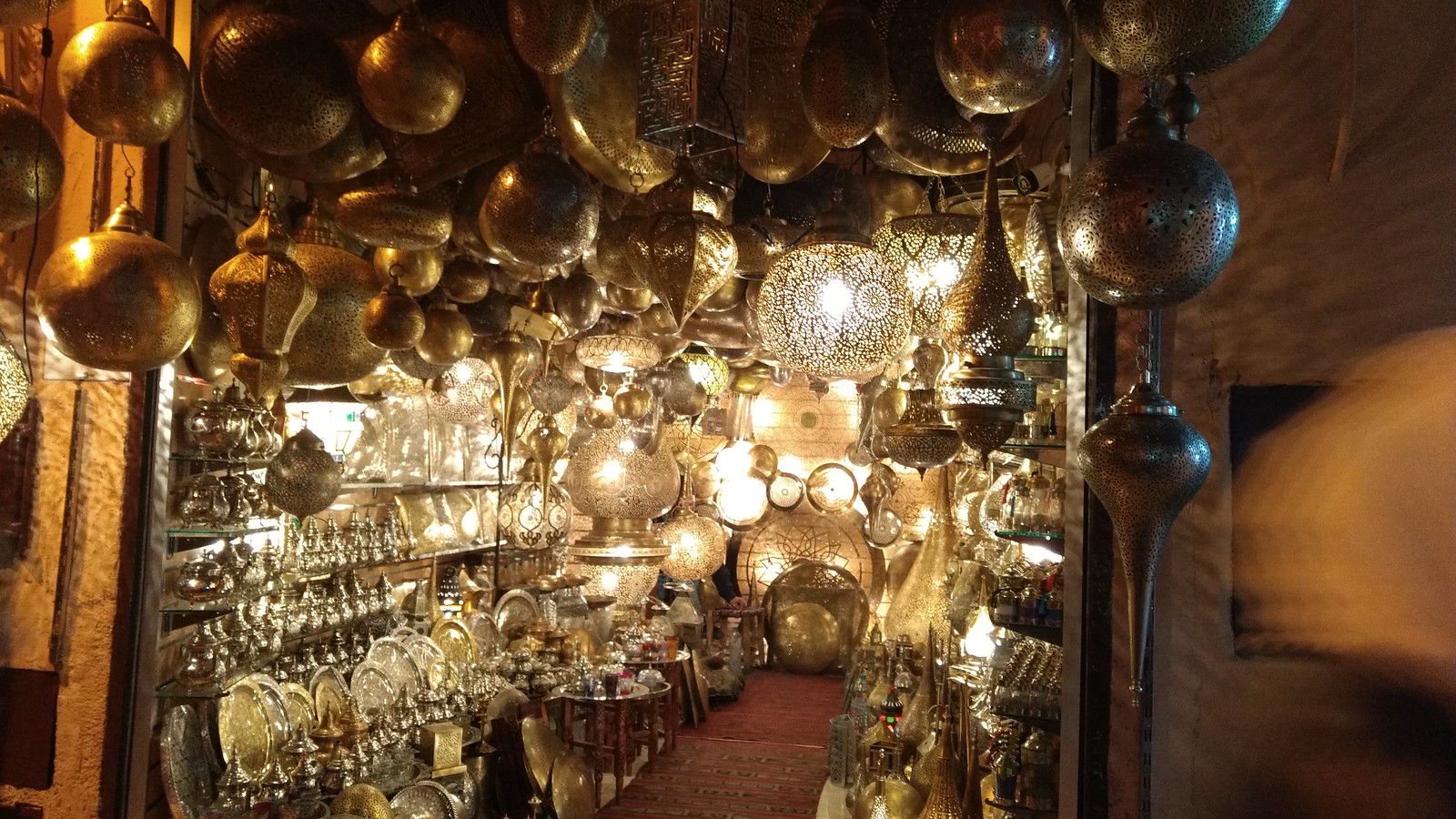 I loved the brass lamps in the souqs… 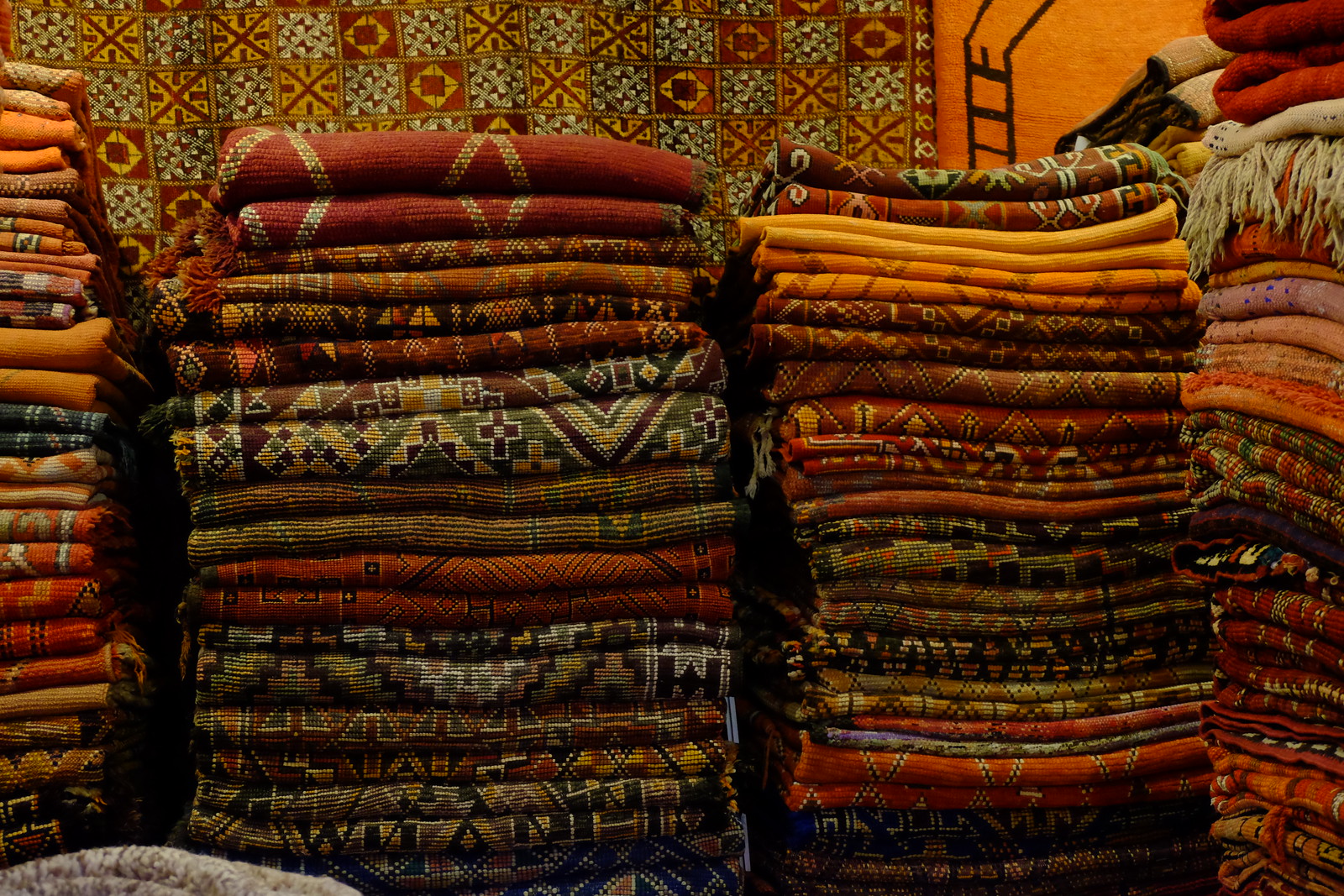 …and the richly colored carpets!

We really didn’t know much about North Africa, so we went to a few smaller museums, one being the Tiskiwin Museum, which is housed in a riad owned by a Dutch anthropologist and contains his personal collection of artifacts gathered over the years along the ancient trading route from Marrakesh through the Sahara to Timbuktu. It was really interesting to see how people traveled way back when, the clothes worn by the different tribes, their jewelry, etc. We also went to the Mouassine Museum, which is a house built during the Saadi dynasty (mid 1500s to mid 1600s) that has been restored and is considered to be one of the city’s finest examples of Saadi architecture from that period. It had beautiful carving and plasterwork, very ornate. It is owned by an artist who was born there, and his art was on display throughout. We thought the building itself was worth the visit. Plus, they put on a traditional music concert that night, which was great, followed by tea and cookies on the roof. 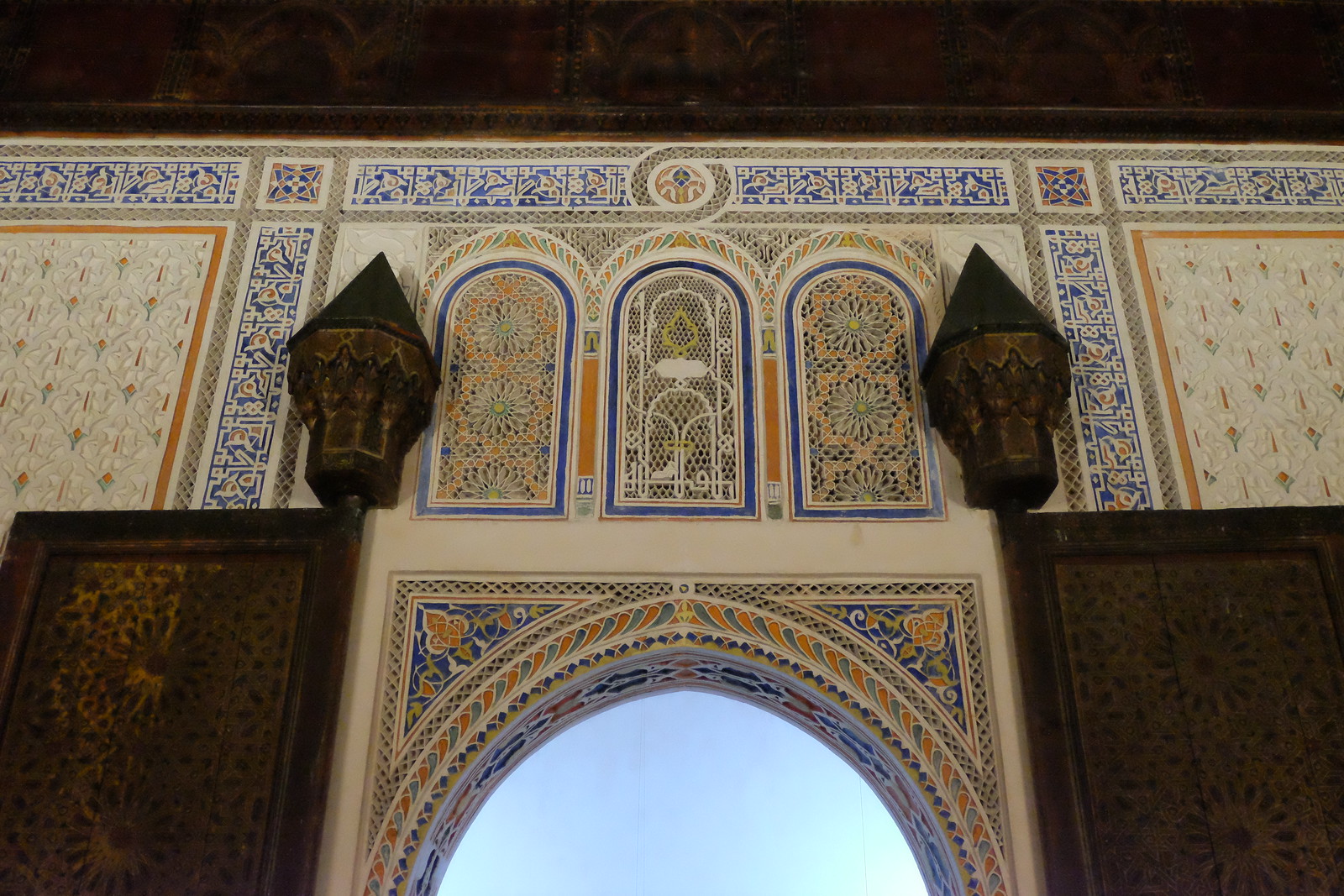 Inside the Saadi house.

Morocco was really high on my pre-trip list of places I wanted to go, for the culture, architecture, food, and incredible things to see. On the food: I was a little disappointed. We certainly had some great food, but we also had quite a bit of good-to-okay food. I had been expecting all these kinds of different tagines that were bursting with flavor and exotic spices, but in general we found about 4 common tagines available everywhere (vegetable, beef with prunes, lamb with prunes, and less common, chicken with olives). We had some very good b’stilla, and some good couscous, including one dish of fantastic couscous on a Friday, which is the only day they make and serve handmade, fresh couscous. It was the same as the difference between fresh and dried pasta. Delicious! By this time we were a year into our travels, and although we weren’t tired of traveling, we were tired of seeing the “must see” sights. We had originally planned to go to Morocco directly after Egypt, but after the blockbuster sights of Egypt, we knew we needed a break. That’s why we went to Italy for three weeks in between. When it was again an effort to see sights in Morocco, we knew we needed to focus on experiences and soaking in the culture. So, we purposely skipped a lot of things that we wouldn’t have appreciated anyway, and now looking back as I write this I do hope we go back someday when we’re ready to see sights again because it is a really interesting country. Also, we went directly from Fez to Meknes to Marrakesh, and had it been summer, we would have mixed things up a bit with a hiking trip in the High Atlas mountains and maybe some time on the coast. But alas, it was winter so those were not realistic options. Yet more reasons to go back! 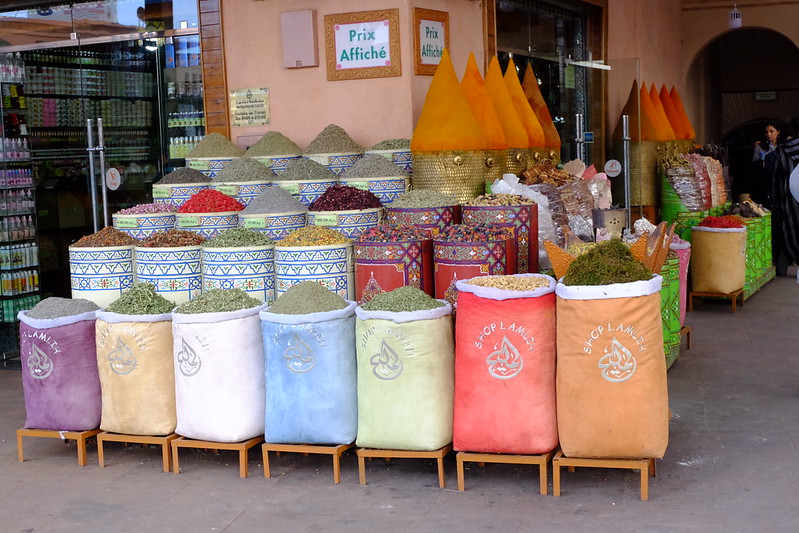 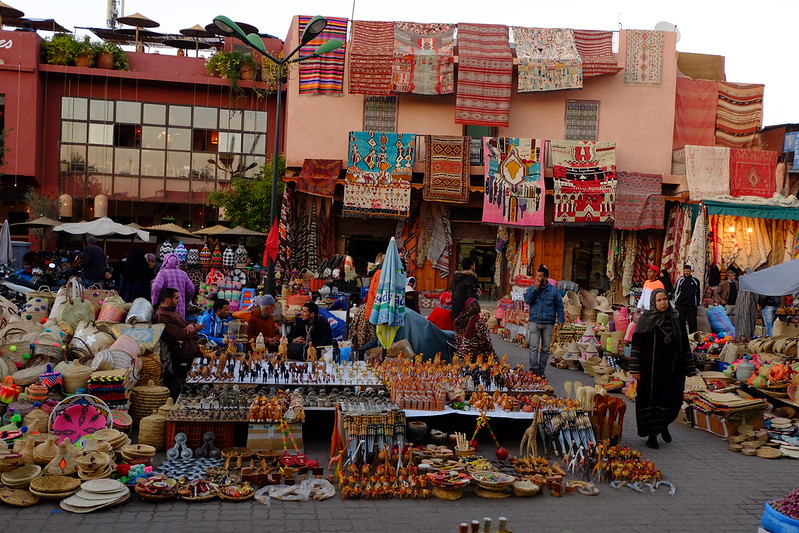 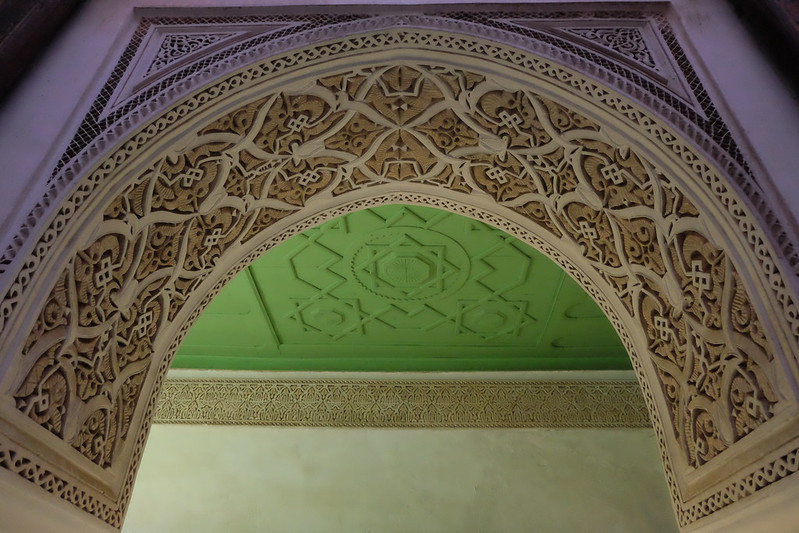 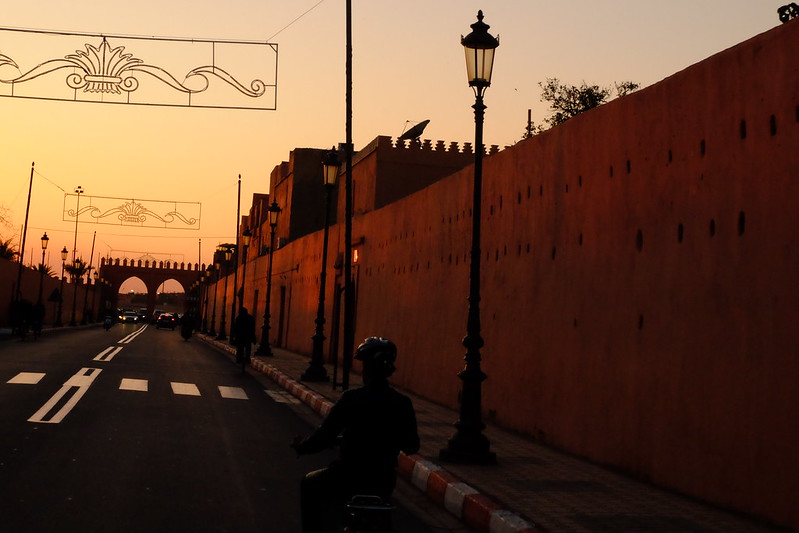 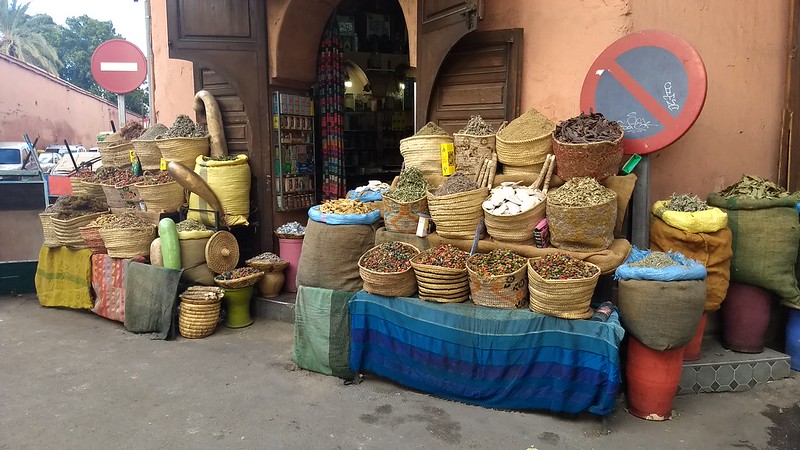 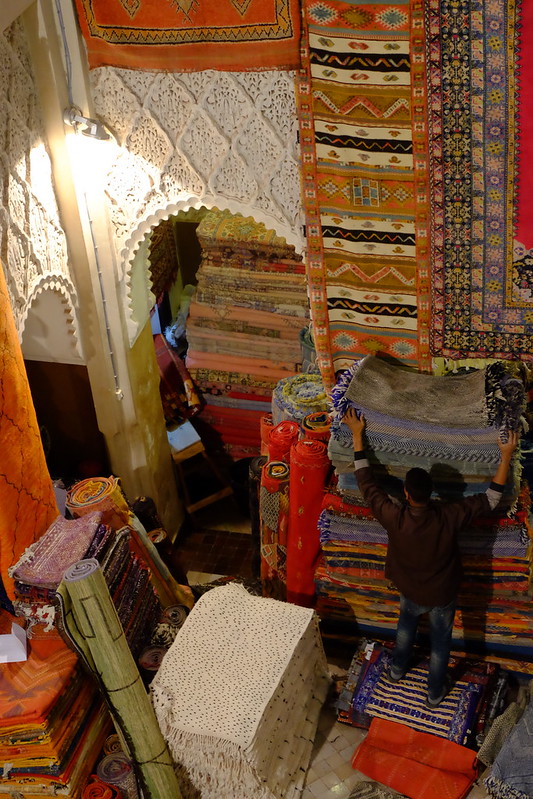 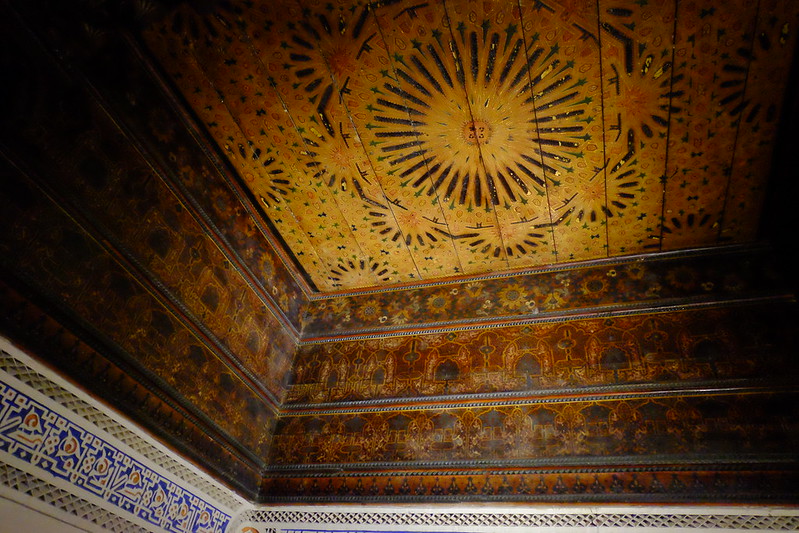 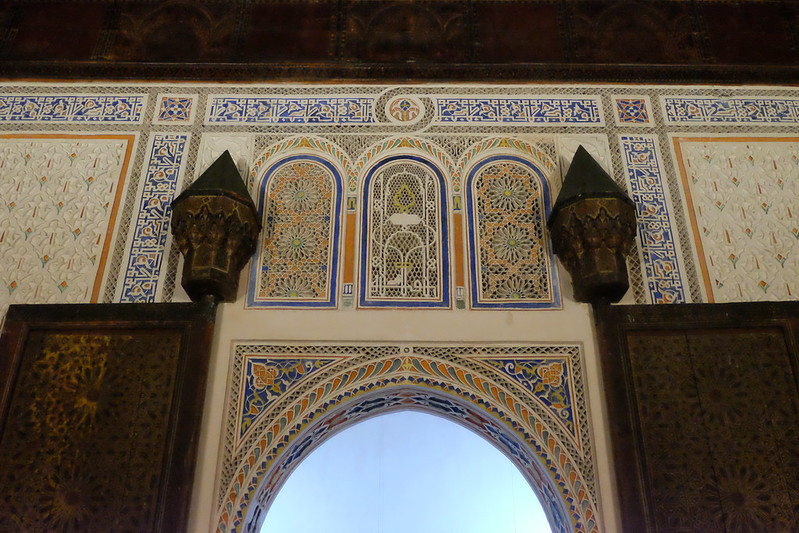 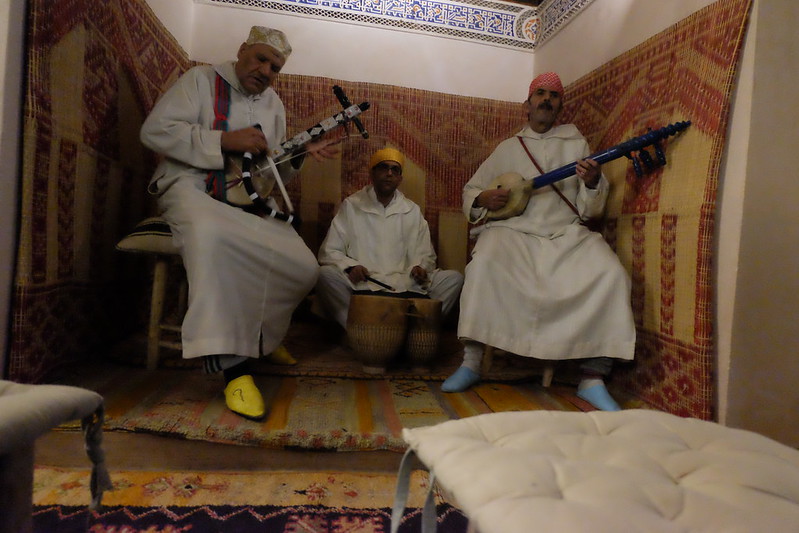 Hi guys, Great write-up and photos. I am always amazed at the level of detail in the
architecture. The photos of the souqs are awesome. It’s hard to imagine enough
demand for spice stock such large bags of it. And you just know that the spice trader in
the photo was not the only one. Oh and carpet trader photos bring back some fond memories.

Again great write-up. Thanks for sharing.

Beautiful. I so want to go shopping there.

Thanks again for the detailed description of your adventure! So interesting!!